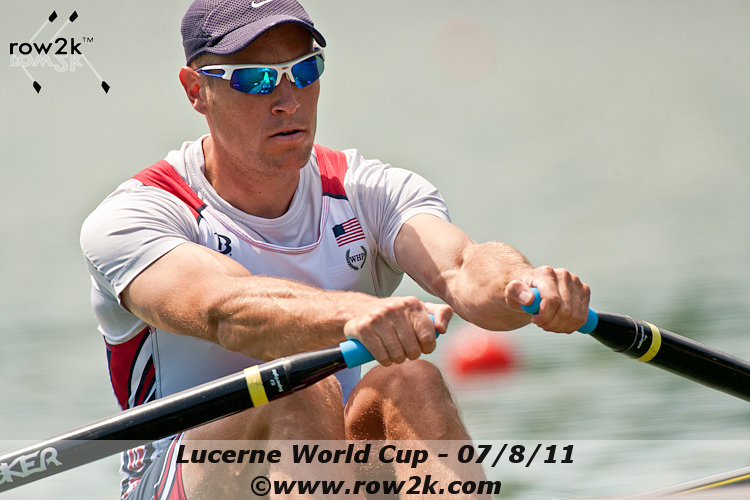 PRINCETON, N.J. - When the 2011 World Rowing Championships begin on Sunday, August 28 on Lake Bled in Bled, Slovenia, the United States women's eight will attempt to win its sixth consecutive world title. Under the direction of head women's coach Tom Terhaar, the U.S. have dominated the field and posted wins this summer at the World Rowing Cup stop in Lucerne, Switzerland and at the Royal Henley Regatta in England.

The eight is one of 26 crews that will bring a year of training and preparation to the start line with medals on their minds. Among the highlights will be the men's four, which is coming off a bronze medal performance in Lucerne, the women's pair, which won bronze at the 2010 World Rowing Championships on Lake Karapiro, New Zealand, and also claimed bronze this summer in Lucerne.

Other events to keep an eye on will be the lightweight women's double which won a gold and two bronze medals in three world cup stops, earning the first ever points trophy for the U.S. Look for a strong performance from the men's eight, which finished fourth in a fast field in Lucerne.

The championships, which doubles as the primary Olympic Qualification Regatta for the London 2012 Olympic and Paralympic Games, has attracted a record 68 nations and more than 1,200 athletes. The entries are spread across 14 Olympic events, eight international events and five Paralympic adaptive rowing events. The men's single sculls has the largest number of entries with 36 countries represented.

Great Britain, Romania, The Netherlands and Canada are top competitors in the event. The Canadians led the U.S. through the first 1,500 meters in Lucerne final, until the U.S. charged through in the final sprint for the win.

Last year, the U.S. took bronze in the women's pair. This year's team sees the return of 2008 Olympic women's eight stroke seat Caryn Davies, who will team up with Kady Glessner, the stroke of last year's eight.

Great Britain's Helen Glover and Heather Stanning are the reigning world champions in the event and should contend for a repeat gold, having just won in Lucerne. Also at the top of the hunt are 2010 silver medalists Juliette Haigh and Rebecca Scown of New Zealand.

The men's pair event features Tom Peszek and Justin Stangel. The U.S. duo earned its berth in the event with an exciting come-from-behind win at the 2011 World Championship Trials on August 4 in West Windsor, N.J. This is Peszek's second national team appearance. He stroked the men's eight to a sixth-place finish last year. Stangel is also on his second national team and rowed to a fourth-place finish in the pair with coxswain last year.

They will meet stiff competition from a field that includes defending 2010 champion New Zealand, along with Great Britain and Greece, the silver and bronze medal winners.

The crew of Anthony Altimari, Blaise Didier and Derek Johnson are scheduled to race in the men's pair with coxswain. This summer, Altimari coxed the U.S. men's eight to a gold medal in the 2011 World Rowing Under 23 Championships. Didier, a silver medalist in the eight at the 2010 World Rowing Under 23 Championships, represented the U.S. this summer in the men's eight that finished third at the 2011 Golden Blades of St. Petersburg Sprint Regatta. Johnson won gold in the eight at the 2005 World Rowing Junior Championships. The United States finished fourth in the event last year while Australia, Italy and Germany finished first, second and third, respectively.

After reaching the final with an impressive repechage win at the 2010 World Rowing Championships, the U.S. men's eight finished in sixth place. The boat has been retooled under head men's coach, Tim McLaren, and finished fourth in Lucerne this summer.

The men's four, which finished fifth last year, also has a new lineup in Bled. Beijing Olympian Giuseppe Lanzone is the lone returning athlete and will sit in the bow with Scott Gault, Charlie Cole, and Brett Newlin. Cole and Newlin were in the eight, while Gault stroked the men's quadruple sculls to an eighth place finish last year.

Germany is the reigning world champion in the event and ruled the field this summer, winning two world cups, while 2010 silver medalist Great Britain took one world cup gold and one silver. The Netherlands will also be a tough challenge, along with New Zealand, Australia and 2008 Beijing gold medalist Canada.

In the women's four, Sara Hendershot, Emily Regan, Kara Kohler and Sarah Zelenka, are rowing on their first senior national team. Kohler was in the eight that won gold in Lucerne. Hendershot won the four at the 2010 World Rowing Under 23 Championships, while Regan rowed to a gold in the under 23 eight. Zelenka won gold in the eight and the four at the 2010 World Rowing Cup in Lucerne.

After winning the second national selection regatta, the lightweight double sculls crew of Julie Nichols and Kristin Hedstrom made their mark on the world cup scene and qualified for the national team in the first of three Samsung World Rowing Cups in Munich. They went on to win gold, a second bronze and a points trophy in the event. They will arrive in Slovenia poised to contend.

This is Nichols' eighth national team appearance. She served an alternate at the 2008 Olympic Games, won a silver medal in the event in 2005 and a bronze in the lightweight quadruple sculls at the 2004 World Rowing Championships. Hedstrom won silver in the lightweight quad last year in New Zealand. The duo faces reigning world champion Canada, in addition to Great Britain, which tallied two world cup victories this summer.

The lightweight women's quad of Nicole Dinion, Hillary Saeger, Lindsey Hochman and Katherine Robinson will go to the line and try to outperform last year's silver medal boat. This is Dinion's first national team. Saeger and Hochman won bronze in the event in the 2009 World Rowing Championships in Poznan, Poland. Robinson won silver in the event at the 2009 World Rowing Under 23 Championships. Germany and Great Britain will be top contenders in Slovenia.

Competing in the lightweight men's four is Ryan Fox, Beijing Olympian Will Daly, 2010 under 23 bronze-medalist Robin Prendes and Anthony Fahden. Daly, Fox and Fahden were members of the boat that finished 10th in New Zealand.

Denmark comes to Slovenia with two gold medals and one silver on the world cup tour, while reigning world champion Great Britain, France and Italy all reached the podium this summer.

Racing in the men's quadruple sculls is Glenn Ochal, Warren Anderson, Will Miller, and Sam Stitt. Ochal and Anderson finished seventh in the double at last year's world championships, while Miller returns from the 2010 crew that finished eighth. Stitt, a Beijing Olympian in the event, rowed in the four last year.

Croatia won in New Zealand and this year took gold in the second world cup stop in Hamburg. The German boat won two gold medals and a silver, while Great Britain won silver and bronze this summer.

Great Britain, last year's champions in the event, has been a consistent medal winner this summer, as have Germany and Ukraine.

Gevvie Stone, who earned her berth to the team by winning the 2011 World Championships Trials, will appear for her first senior national team in the women's single sculls. Stone, who won the first national selection regatta and was a runner up for the Princess Royal Challenge Cup at the Royal Henley Regatta this year, won gold in the quad at the 2007 World Rowing Under 23 Championships and gold in the eight at the 2006 World Rowing Under 23 Championships.

Returning to the men's single sculls after finishing 10th in New Zealand last year is Beijing Olympian Ken Jurkowski. Jurkowski won his selection regatta event and went to Europe, where he qualified for the team with a bronze medal at the Samsung World Rowing Cup in Hamburg.

Jurkowski finished 11th in the event in the 2008 Olympic Games. He also faces a tough field that includes Mahe Drysdale of New Zealand, as well as top scullers from Norway, Czech Republic, Great Britain, Germany and Sweden.

The women's double sculls features Kate Bertko and Sarah Trowbridge. Bertko and Trowbridge earned nominations to the national team with a silver-medal finish at the Munich world cup after winning the second national selection regatta.

Trowbridge and Bertko were both members of the women's quad that won silver at the 2009 World Rowing Championships in Poland. At last year's worlds, Trowbridge finished fifth in the quad, while Bertko raced in the double that also finished fifth.

The men's double sculls features brothers Peter and Thomas Graves, back again to race at worlds. The Graves brothers earned their berth at the World Championships Trials and return to the event in which they placed 16th in Poland. They will have their hands full with teams from New Zealand, Germany and Great Britain.

In the lightweight men's single sculls, Andrew Campbell will represent the United States, following his win at the 2011 World Championships Trials. The nineteen-year-old Harvard sophomore won the bronze medal last month at the World Rowing Under 23 Championships in Amsterdam.

Sam Cunningham, Todd Mickelson, Christopher Lambert and Shane Madden will man the lightweight men's quad. Both Cunningham and Madden have rowed the event in the world championships. Cunningham finished sixth in 2009 and Madden finished fourth in 2008. Germany, France and Denmark all reached the medals stand last year in New Zealand.

Rowing in the lightweight men's pair is the team of Kyle Lafferty and Phillip Oertle. Both are rowing on their first national team. The U.S. boat finished ninth last year. Lafferty and Oertle will see strong competition from France, the defending champion, New Zealand and Italy.

In the adaptive men's single sculls, Ron Harvey returns for his eighth national team run. Harvey finished fifth at the first-ever 2008 Paralympic Games for rowing in Beijing. He won bronze in 2004 and 2005 and silver in 2006. He finished ninth last year.

Also representing the U.S. for the first time in the mixed trunk and arms double sculls are Anthony Davis and Jacqui Kapinowski. Kapinowski competed at the 2010 Paralympic Games in Vancouver, finishing fourth for the U.S. curling team.

Recruiting Part 2 - Intangible Qualities
Get our Newsletter!
Enter your email address to receive our updates!