row2k news
Gold and Silver on the Final Day of Rowing at the 2016 Olympic Games
August 14, 2016
USRowing
Photo: USRowing 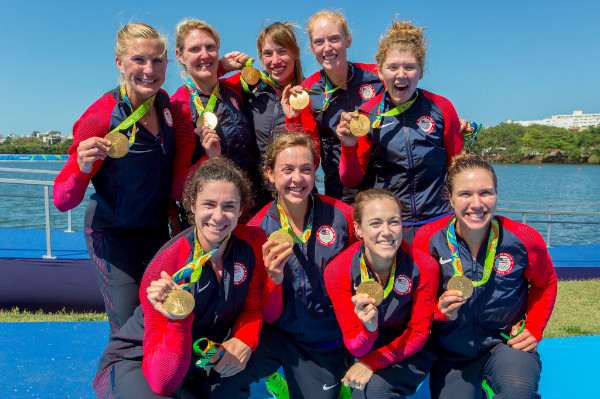 Sometimes, when the United States women's eight races, it can look easy. The red, white and blue blades are only part of a pack of other colorful oars for a short time.

Other times - like in the final of the 2016 Olympic Games in Rio de Janeiro, Brazil, when they carried a 10-year winning streak to the start line - it takes something extra special to win gold.

And so it was Saturday morning. The "unbeatable" U.S. women's eight, a dynasty in any sport, was running in bronze medal position to the halfway mark of the 2,000-meter course. Canada, which has been gunning for the U.S. podium position for at least the last four years, was leading, the athletes pouring everything they had into the water of the Lagoa Rodrigo de Freitas racecourse.

"All races are tough," said U.S. five-seat Tessa Gobbo. "That was a really tough one. Everybody across the board stayed tough, Canada included. Everybody did. I'm never shocked to be in a tough race. I am always a little shocked to be ahead. We were just trying to keep it cool and hang onto it once we got an inch."

Hang onto to it, they did, upping the rate and intensity going into the third 500-meters, where the Americans pushed the bow ball just slightly ahead of the field for the first time and began moving. Crossing the 1,500-meter line, the U.S. blades were clearly in the lead. Canada was in second and running out of steam.

Great Britain, which had been rowing in sixth, climbed through the pack and moved into second, and Canada dropped into fifth. Great Britain made a push and tried to move on the U.S. in the last 500 meters, but the chase was over and the United States claimed the third-consecutive Olympic title.

The women's eight's gold was the second U.S. medal of the regatta. Racing just before them in the women's single sculls, Gevvie Stone (Newton, Mass.) took silver and improved on her seventh-place finish in London four years ago.

"You know, I've heard people say they aren't happy with the silver medal," Stone said. "I couldn't be happier. I'm on the top of the moon right now."

"It's been a long year for us," said Hack. "We sort of retooled the whole thing, and it's been battles, week-in and week-out for almost 12 months. To finally get to this stage was awesome, but I'm sure everyone would have loved to have had a little more. We really wanted to go out hard and produce an effort we could be proud of. Our start wasn't our best, and we didn't really get into the rhythm that we wanted, but I think we really brought all the intensity and heart that we could have."

Saturday's three finals and two medals capped an up-and-down week for the 11 crews that raced in Rio. There were tough wind conditions in the opening days that persisted and forced racing to be postponed completely and organizers to pack sometimes nine events into a single day.

There were historic results - the lightweight men's double sculls gained a final for the first time at an Olympic Games. And there were disappoints. The men's four missed the final and the women's pair, racing on medal pace all week, finished fourth.

The buildup to the women's eight gold-medal race began last summer, when the eight won the 10th-consecutive title. The pressure mounted as the Olympics drew nearer, and the media attention went from bright light to spotlight, drawing comparisons to other sports dynasties; Sports Illustrated called the crew "The Unbeatables," in its Olympic preview edition.

But this is a group with a mix of first-time Olympians, Olympic veterans and a steely coach who keeps a tight lid on any possible distractions. He understands that anything said prior to finals day can end up as fodder for the opposition to feed on.

And they have successfully handled the pressure of a historic streak.

"I wanted to win, regardless of anything else," said Snyder. "I would have wanted to win the same if we had never won before, or if we had won for the past 20 years. For me, it was my first win, and there is pressure in that, but I don't think I felt any pressure for the streak. I think we're pretty lucky to row with Olympic gold medalists, and I think, truly, that gives us an advantage more than there being pressure, over anything else."

With only two races to row at the Olympics for the eight that can advance straight into a final from the heat, Snyder's voice was strained. Small speakers mounted under the seats from boat from stern to bow carry her voice throughout the boat.

But she had clearly been shouting. Her teammates remember that when they finally gained an inch of clear water, Snyder shouted that they were the women of the United States and called for more.

"It's all kind of a blur," said Simmonds, with Schmetterling standing beside her, echoing the sentiment. "The only thing I can specifically remember is the 500-meter push, the last 300 maybe, going together for that quickness and Katelin calling something. She called it, we responded, and we could feel we were going to do this."

After the medal ceremony, when the excitement in the boatyard had settled some and the women were in a press conference talking about themselves as family, Terhaar stood to the side and beamed.

"That was really hard," he said. "And I'm really enjoying this."