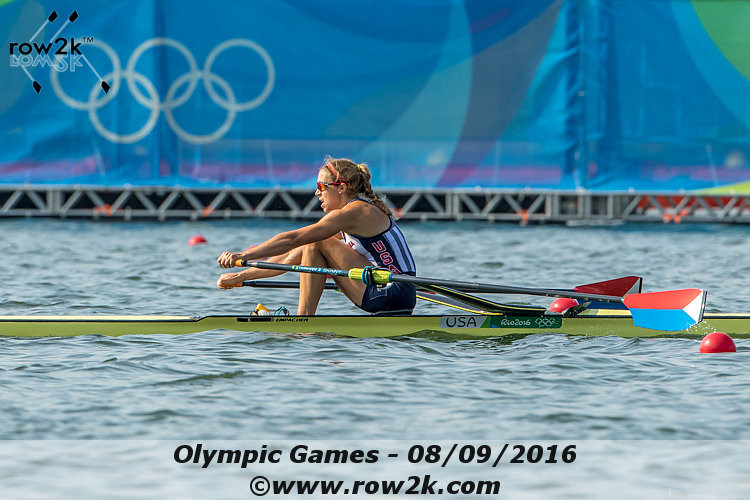 Grace Luczak could have looked back at her Olympic final and talked first about what didn't happen. She and partner Felice Mueller were hoping for a medal performance in the final of the women's pair. Luczak, instead, looked forward to Sunday, and the finals her teammates have in front of them in the women's single, men's eight and women's eight. Both eights qualified for the medal races earlier in the week, and Gevvie Stone (Newton, Mass.) earned her chance in the women's single event from Friday's semifinal.

"We've very excited for our crews yet to come, because this is a really great group, and I think medals should be coming our way," Luczak said. "I can't speak for them, but I don't think they are thinking about anything but their races right now. I think they are being very internal. That's what they have to do."

What Luczak said, Mueller echoed, and even through their own disappointment of not standing on the podium today, they are keeping composed, because both are alternates for the eight and will be ready if called upon.

Still, Friday was a hard result to absorb. After winning during selection competition, at World Rowing Cup II in Lucerne in May, dominating the heat on the Lagoa Rodrigo de Freitas racecourse in Rio de Janeiro, Brazil, and then qualifying for the Olympic final with the second fastest time in the semis, both were hoping for more.

They got off the line in the Friday final and were in medal contention - racing in second though the first 500 and third in the second quarter - but Denmark and New Zealand came through in the end.

Great Britain's undefeated Helen Glover and Heather Stanning led the field the length of the course and won the gold in 7:18.29. New Zealand won silver in 7:19.53, and Denmark took bronze in 7:20.71. Luczak and Mueller finished fourth in 7:24.77.

"I'm extremely disappointed," said Mueller. "I didn't think it was a bad race. I commend our competitors. They're incredible athletes, but this isn't the race, this isn't the day, that Grace and I were setting out to have."

The women's pair was one of two finals raced by U.S. crews on Friday. Just before the pair, Andrew Campbell, Jr. (New Canaan, Conn.) and Joshua Konieczny (Millbury, Ohio) raced in the lightweight men's double sculls final, the first American crew to do so in the event at an Olympic Games.

Campbell and Konieczny raced in a tight pack through most of the 2,000-meter course. Five of the crews were not separated by more than a second or two until the last 500 meters. The U.S. was in third in the first quarter, second over the next 500, and then dropped into fifth in the last 600 meters, where they finished in 6:35.07.

"It was encouraging that we were in the lead at one point," Konieczny said. "Our splits said we belonged in the A final. Earlier this year, in Lucerne, we got into the A final, and our splits were ridiculously slow compared to everybody else. So to come here and be with the top crews was really something."

"You know, we came into this regatta with the goal of making the A final and after that, to us, everything is upside," said Campbell. "We're pleased with our performance. We were in it most of the way, just couldn't keep up with the pace at the end. But overall, this is a great end to what has been a great time rowing together."

While both finals ended out of the medals, the U.S. will have three medal opportunities Saturday - the last day of the regatta - in the finals of the women's single, women's eight and men's eight.

Stone earned her bid in the semifinal Friday morning, finishing second in 7:44.56. China's Jingli Duan won the race in 7:43.97, and Magdalena Lobnig of Austria was third in 7:45.48. Switzerland's Jeannine Gmelin, Australia's Kim Brennen and New Zealand's Emma Twigg will join them in the final.

Stone was satisfied with having made the final, a goal she set for herself after finishing seventh in the event at the 2012 Olympic Games in London. But, she said she will carry some extra motivation with her after having Duan sprint through her in the final 250 meters.

"The goal was to be top three," Stone said. "And I did that, and tomorrow is the race for the medals. I can't say that race went exactly how I wanted it to go, and I'll never be happy if someone passes me in the last 250. It makes me motivated for tomorrow.

"I'm ready to go out there and give it another race tomorrow. I'm in the hunt. It's good to be in the hunt, and tomorrow will have to be an amazing race to be on the podium. It's the single. It's going to be a battle of wills."

Of the 11 U.S. crews that were entered in the 2016 Olympic Games, most have completed competition, including the lightweight women's double sculls and men's four that raced in B finals Friday.

"It was good to win the B final," said Cole. "It's a nice consolation prize. It doesn't really change the results, but at least we are happy to go put our best foot forward today. Now, we're just going to cheer really loudly for the eight and all the other boats that are going to be going for the medals."