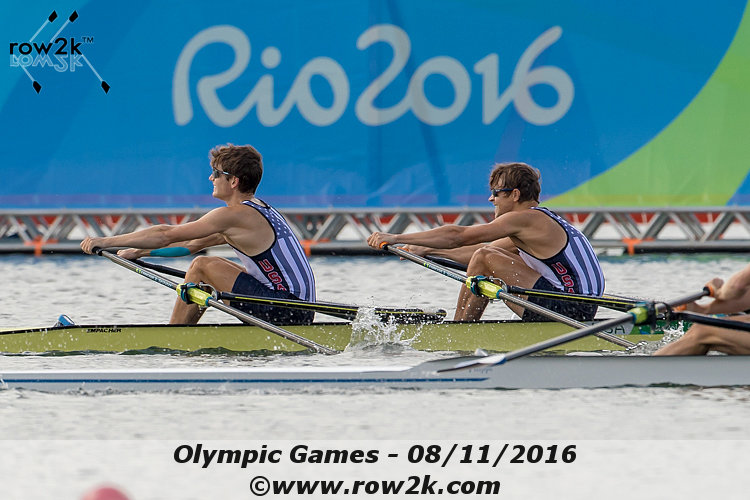 John Mueller stood above the media interview area next to his grandstand seats at the Olympic racecourse, looking down at his daughter, Felice.

The look on his face said everything anyone needed to know about how proud he was after watching his daughter, and her pair partner Grace Luczak, finish second in their Thursday semifinal, earning a spot in Friday's final at the 2016 Olympic Games.

"That was phenomenal," said Mueller, who had just arrived in Rio on Wednesday in time to watch the semifinal and see the U.S. advance. "She's worked so hard for so many years. It was fabulous to watch her accomplish this."

As they have since their opening heat Monday, Luczak (Ann Arbor, Mich.) and Mueller (Cleveland, Ohio) earned their place in a convincing way, trailing only Heather Stanning and Helen Glover, the defending Olympic champions from Great Britain. The U.S. finished second in 7:20.93 behind Britain's 7:18.69.

The two crews finished with the fastest times of the semifinals and have set up a dramatic challenge for the final that also will include Spain, Denmark, New Zealand and South Africa.

The pair's performance, and that of the men's eight which advanced with a rep win, and the lightweight men's double sculls, which advanced from the semifinals, were the highlights of the rowing program at the Lagoa Rodrigo de Freitas racecourse.

The lightweight men's double made history, becoming the first U.S. crew ever to advance to the final in the event.

After weather forced the postponement of racing on Wednesday, the schedule today was jammed and nine American crews went to the line.

Two of those crews, the women's quadruple sculls and women's double, were racing for the first medals of the regatta. But, those medal chances passed the U.S. by. The women's quad finished fifth and the double finished sixth.

"I feel torn between being really happy to have made it here and disappointed not to have a medal. Everything else has been so great, and I think I'm more emotional because this is capping off four years of a lot of work. All four of us have had our own adversities getting here, and we were the four people for the job."

Following in the next U.S. final were Ellen Tomek (Flushing, Mich.) and Meghan O'Leary (Baton Rouge, La.). After sprinting to a wild finish in the Tuesday semifinal, the U.S. could not handle the rough water from the wind and suffered critical missed strokes in the first 500 meters and never recovered enough to be in the medal hunt. They crossed sixth in 8:06.18. Poland took the gold medal in 7:40.10. Great Britain won silver in 7:41.05, and Lithuania took bronze in 7:43.76.

"We're disappointed," said O'Leary. "It's not the performance that we know we are capable of. There were nasty conditions again, but we didn't get beat. We beat ourselves. We know we're fast; we proved it in the semis. Just today, we didn't handle those condition as well as we should be able to, and it just took us out of the race."

So now the U.S. medal hopes move to Friday with the women's pair and the lightweight men's double sculls.

"I think that the women's pair is an incredibly competitive event, and the fact that we can race in the A final for the top six spots in the world is incredible," said Mueller. "Check-mark," added Luczak. "That was our goal for today. We're going to finish our cool down and get ready for tomorrow."

Getting ready for Friday is the same place that Andrew Campbell, Jr. (New Canaan, Conn.) and Joshua Konieczny (Millbury, Ohio) find themselves.

"This has been our goal since the very start," Campbell said. "Making the A final was the thing (we talked about) when we first convened the Boston training group two years ago. That was our ultimate goal, and now we're in. I guess I haven't really thought beyond this point at all. We'll figure it out."

The Netherlands finished second in 5:52.95, and New Zealand was third in 5:56.94. Poland also advanced in fourth in 5:59.22. Heat winners Germany and Great Britain will join those four crews in the Saturday final.

"That was a really good race today," said Ochal. "It was better than our heat. We're excited about that, and we're hoping to make more improvements Saturday. I think all nine guys are excited about Saturday and excited about our results here today. At the same time, it doesn't mean anything, and we have to go out and go really fast on Saturday."

Kate Bertko (Oakland, Calif.) and Devery Karz (Park City, Utah) raced in fifth the length of the course and will row in the B final Friday.

"I'm disappointed, but I couldn't ask to be here with someone who is a better fighter or better racer," said Karz. "Everyone is fast. We're looking forward to a final tomorrow."

In the last semifinal of the morning, Seth Weil (Menlo Park, Calif.), Charlie Cole (New Canaan, Conn.), Matt Miller (Springfield, Va.) and Henrik Rummel (Pittsford, N.Y.) were in position to reach the final for the first 1,500 meters of the race. They were rowing in second place, but in a race where none of the top racing crews were letting go.

"It was a tough race. We wanted to go out for the lead, and we did that. We went out hard and better out of the gates than we did in the heat," said Cole. "We'll probably look back and wonder what we could have done differently, and there's probably a lot of answers to that. But the crew wasn't up to the standard, and we'll have a lot of time to reflect on that. But that's just the reality of it."

"I thought the guys had a good, solid piece and a good, solid first half of the race," said men's four coach Bryan Volpenhein. "Even the third quarter was pretty good. They did what they wanted to do. They were in good position against Italy and Australia. That was our goal, to get up and go with Australia and get up on Italy and get into the race. We weren't expecting South Africa to be that fast. We haven't seen a piece like that from them all year.

"That was a surprise and a shock," he said. "The guys are disappointed, but we have a B final tomorrow to get up for, and the guys have to get ready for that. Hopefully, we can rebound a little bit."

Two U.S. crews, the lightweight men's four and the men's pair, raced in B finals Thursday.