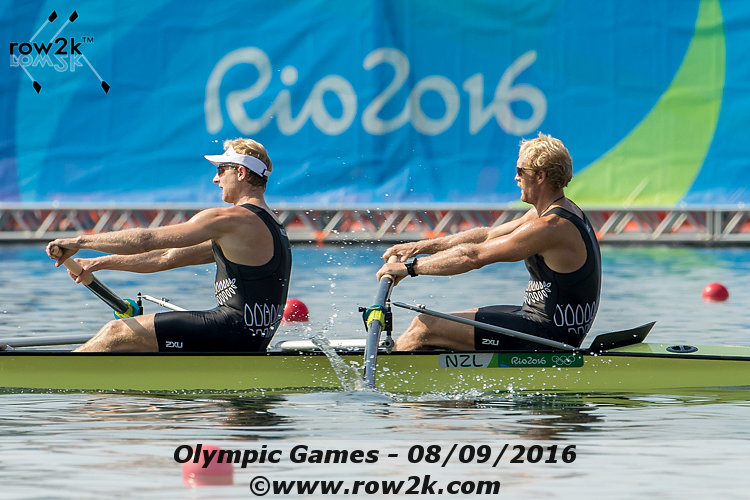 A wide spread of medals characterized the first day of finals at the Rio 2016 Olympic Rowing Regatta in Rio de Janeiro, Brazil. Of the 18 medals awarded in the six finals contested, 15 countries featured.

The German men made it a double gold day by also winning the men's quadruple sculls. The defending Olympic Champions, with three members of their 2012 crew on board, made no mistakes leading from start to finish in this Olympic final. Australia won silver and Estonia took bronze.

Denmark has now medalled at every Olympic Games since the lightweight men's four was added to the Olympic programme in 1996. The Danes finished second to Switzerland with France in third. For Switzerland it meant their first Olympic gold in rowing since 1996.

One of the most significant finals of the day was the men's pairs featuring New Zealand's Hamish Bond and Eric Murray. The New Zealand duo earned their 69 th straight victory in the pair. They have not lost a race in this boat class since coming together in 2009. Bond and Murray also won at the London Olympics making them only the third pair ever to successfully defend their Olympic title. For silver medallists, South Africa, it meant an amazing comeback for Lawrence Brittain who overcame cancer to get to these Olympic Games. Brittain raced with Shaun Keeling. Italy won bronze.

The eight-day rowing regatta began on 6 August but two racing days, Sunday and Wednesday, were lost due to severe winds. Today's racing included catching up on Wednesday's postponed races so that finals originally planned for Wednesday were raced today.

Racing continues on Friday, 12 August, and includes the remaining semifinals plus finals in the lightweight women's and men's double sculls, the women's pair and men's four.