The National Team men's eight - rowing as Victoria City Rowing Club and Shawnigan Lake School - finished ahead of the U.S. Princeton Training Center eight by a half length. The final winning time was 6.02 minutes.

"It felt good off the start, and we set a decent pace through the middle," said Andrew Byrnes, a 2008 Olympic gold medalist. "It's a lot different than a six-boat (Olympic-style) race - you are more focused on just the one boat you're racing.... We're looking forward to the next race."

The men's eight this year is Mark Laidlaw (cox) of Mississauga, ON, Derek O'Farrell of Unionville, ON, Andrew Byrnes of Toronto, ON, Doug Csima of Oakville, ON, Rob Gibson of Kingston, ON, Conlin McCabe of Brockville, ON, Anthony Jacob of Vancouver, BC, Gabe Bergen of 100 Mile House, BC, and Steve Van Knotsenberg of Beamsville, ON. Of this eight, only Byrnes raced in the 2008 Olympics.

Malcolm Howard of Brentwood College - a former member of the men's eight now taking on the singles event - also won his race, amid the growing crowds of Henley spectators and partygoers, many on boats that run alongside the rowing course.

"Today's race felt good," said Howard, "with each race you learn how to manage the distractions such as the pleasure boats on the river, and today I definitely felt more comfortable on this course."

Tomorrow Howard faces tougher competition in New Zealand's Mahe Drysdale, a four-time World Champion and Olympic bronze medalist, in a race that will be closely watched by rowing enthusiasts in the crowd.

The women's eight is Lesley Thompson-Willie of London, ON, Cristin McCarty of Saskatoon, SK, Darcy Marquardt of Richmond, BC, Ashley Brzozowicz of London, ON, Krista Guloien of Port Moody, BC, Andreanne Morin of Montreal, QC, Janine Hanson of Winnipeg, MB, Sandra Kisil of Ancaster, ON and Emma Darling of Burnaby, BC.

"It was a successful start to the eight's European tour (that will include the next World Cup in Lucerne)," said Hanson, who rowed in the last Olympics in the women's quad. "We've been training hard and we were looking forward to putting all the parts of our race together, and this was a good way to start."

Tomorrow the women will face a strong Dutch crew that promises to provide more of a challenge to the Canadians.

One of Canada's entered men's fours (with a revised lineup of Will Crothers of Kingston, Ont., Fraser Berkhout of St. Catharines, Ont., Mike Wilkinson of Vancouver, BC and Matt Jensen of Innerkip, Ont. won its race in the Stewards' Challenge Cup against an Argentinean crew in 6.56 minutes. The other Canadian four entered in this event lost its race against the Yamoto Rowing Club of Japan today.

The women's quad (representing Western RC) in the Princess Grace Challenge Cup won their race today; one and a half boat lengths ahead of an Italian crew. The Canadian quad rowing here is a mix of light and heavyweight rowers - Tracy Cameron of Shubenacadie, NS, Romina Stefancic of Victoria, BC, Peggy DeVos of Kamloops, BC, and Katya Herman of Sudbury, ON.

The men's pair of lightweight rowers Matt Jensen of Innerkip, Ont. and Rares Crisan of Mississauga Ont. were knocked out of the regatta's Silver Goblets and Nickalls' Challenge Cup today. Jensen, however, had success when he replaced David Calder in the four, who withdrew to day due to illness, and still advances with this crew.

Races are head-to-head knock out competitions, raced over 1 mile, 550 yards (2,112 m). The regatta has been a British tradition since 1839. The Henley, however, is also known as a social event with visitors required to wear proper dress.

Today, royalty graced the regatta with a visit from Anne, Princess Royal, the Queen's daughter. Princess Anne, who last visited the regatta in 1999, spoke with several top competitors, including the Canadian men's team and their coach Mike Spracklen, who is originally from nearby Marlow. (Photos available on request).

Racing continues through to Sunday, July 04. 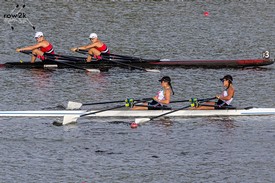