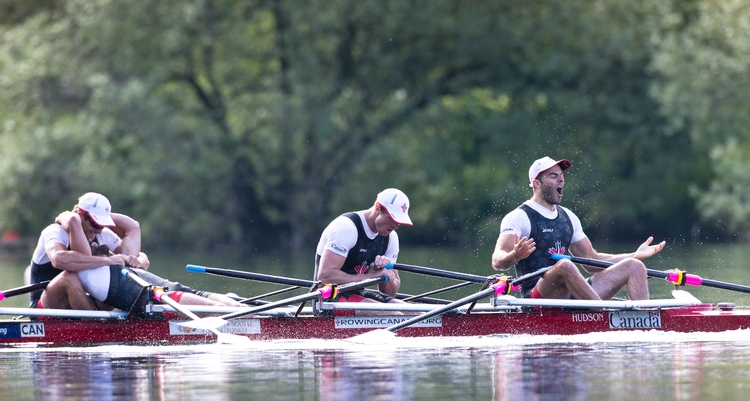 "We spend a lot of time trying to just focus on the process of what we're doing and not the result. And it's not until after it's over that you realize what you've done," said Will Dean, men's quadruple sculls. "It's been a short year and a long year. In the sense of the pressure but going into this regatta, I've never felt more support from the Canadian rowing community. Everyone was in our corner and everyone had our backs. It's just a privilege for me to row with these guys."

At the Rio 2016 Olympic Games, Canada will compete against Germany, Australia, Estonia, Great Britain, Switzerland, Lithuania, Poland and Ukraine who all qualified at the 2015 World Rowing Championships.

The men's quadruple sculls will be joined this weekend by six Canadian crews in Lucerne at World Rowing Cup II. This weekend's regatta will be the final international competition for Canadian rowers prior to the Rio 2016 Olympic Games.

Canada qualified six boats for the Olympic Games and one for the Paralympic Games at the World Rowing Championships in September 2015.

RCA, alongside the Canadian Olympic Committee, will announce the team of athletes competing at the Rio 2016 Olympics on Tuesday, June 28 in Toronto. RCA will also host media availabilities at training camps in Guelph and London, Ontario on July 23. Details for all media events will be released closer to the date.