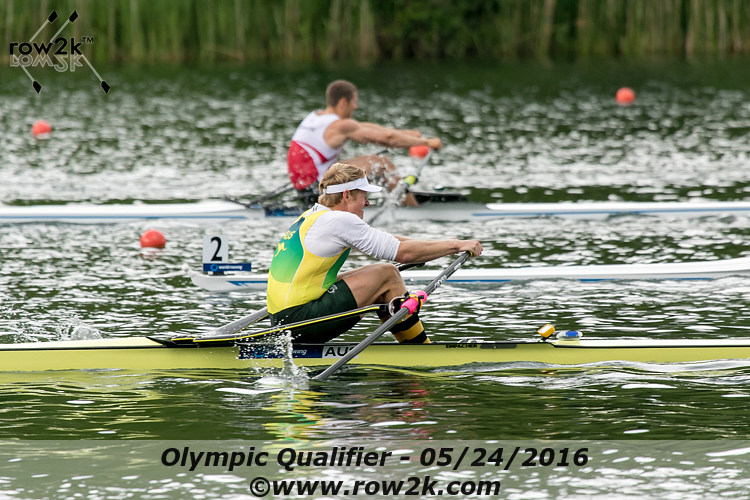 Rhys Grant had a spectacular final in the Men's Single Sculls event to secure Australia its first qualification spot of the night. The Western Australian faced stiff competition from an inform Hannes Obreno of Belgium and Sverri Nielson from Denmark, while Hungary, Finland and Germany were not to be discounted in this make-or-break final.

Nielsen made his intensions clear at the start by jumping out into the lead with the goal for the competitors to be in a top three position at the finish line to qualify their boats for the 2016 Rio Olympic Games. While Grant was fourth at the 500 metre mark, the Australian is a seasoned racer and made a burst to take the lead at the 1000 metre mark with Obreno alongside him.

With 500 metres to go Obreno pushed ahead of Grant but the Perth-local kept with him sitting in second, while Hungary's Bendeguz Petevari-Molnar overtook Nielsen to snap up the third qualification spot. Finishing in a time of 6.49.07, the reigning Interstate Men's Single Scull Champion of Australia crossed the line in second and booked Australia its eighth boat for Rio de Janeiro.

Post-race Grant, who is coached by Rhett Ayliffe and Andrew Randell, said: "I can't believe I qualified, the guys were coming really hard for me but I could hear my parents cheering me on in the crowd. Words cannot express how I feel right now about qualifying the boat."

The Australian Women's Eight of Sarah Banting, Olympia Aldersey, Lucy Stephan, Charlotte Sutherland, Molly Goodman, Meaghan Volker, Alexandra Hagan, Jessica Morrison and Fiona Albert needed a top two finish in their final to book a place for Rio de Janeiro. Placed in Lane 2, the crew were up against China, Romania, Netherlands and Germany, with the Dutch the favourites to claim one of the spots.

The Dutch were the fastest out the blocks, along with Romania, and the battle ensued between them for the majority of the race, with Australia nipping at the heels of the leading two crews throughout. However, the Romanians and Dutch proved to be too strong and they were first and second over the line, with Australia finishing third with a time of 6.07.35.

In the Men's Eight, Australia were hoping to replicate their strong performance from the race for lanes earlier in the week. The crew of Stuart Sim, Charles Risbey, Fergus Pragnell, Scott Laidler, Nick Purnell, Tim Masters, James Medway, Joshua Hicks and James Chapman laid it all on the line in a bid to qualify the boat for the 2016 Rio Olympic Games.

Needing a top two finish and racing against crews from Poland, Italy, USA and Spain, the Australians shot out of the start rating at 50 and at the 500 metre mark were in second place. However, at the halfway mark the USA began to make its move in a bid to chase down race leaders Poland, with Australia slipping back to third place.

With 500 metres to go, it was neck-and-neck for the USA and Poland, with Italy in third and Australia in fourth. The Australians were rating at 40 by this point, looking to get back into contention and book one of the last two places for the Rio Olympic Games. However, the Americans and Poles fended off their challenge, as well as Italy's, with the USA crossing the line first in a time of 5.29 and Poland second (0.46 second behind), Australia were fourth in a time of 5.33.