Larry Gluckman on the dock in Lucerne in 2016

Update June 11: A celebration for Larry will be held July 17 at Craftsbury.

Longtime rowing coach, innovator, and mentor to countless athletes Larry Gluckman passed away early on March 30, 2021, in Burlington VT, surrounded by his wife Sara and daughters Meg, Kate, and Anna, due to complications of a stroke that occurred while fighting leukemia; he was 74 years old.

Gluckman's life in rowing was varied and impressive; he was a US national team, Pan Am, and Olympic athlete, a US national team and Olympic coach, coached at his alma mater Northeastern (where he walked on to the rowing team, was captain by his senior year in 1969, and was later inducted into the Hall of Fame), Columbia (where he earned a masters in Special Education), Princeton (where his crews won the 1985 IRA and he founded the Princeton Chase and Belly), Dartmouth, at Trinity (where they won a heap of stuff including Henley, and he has a boat bay named for him), at Craftsbury, at the Florida Rowing Center, at countless US trials, and more. 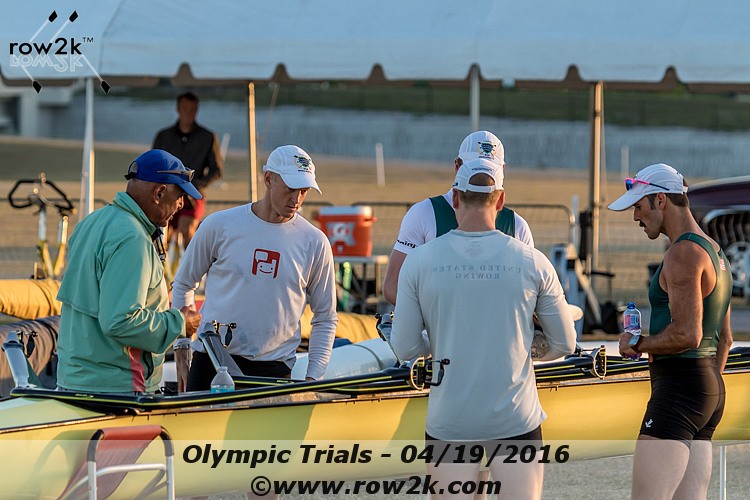 In addition to his coaching, Gluckman also did a long stint at Concept2 that corresponded with many of the company's most innovative products. He was also the Power 10 honoree in 2011.

Gluckman had success at every level of the sport, including more than one 'comeback' segment of his career; again and again, Larry would be in the mix once again just when a new program was surging, or a young sculler was showing promise, or another athlete was peaking, or a crew beat the odds at Henley, and more.

More than his successes, however, Gluckman will be remembered both for his outgoing, large, "force of nature" presence, as well as a thoughtful, philosophical bent - certainly tilted a bit at times toward the former - and his ability to help athletes get the absolute most from themselves through a mix of hard work and performance psychology that was pure Gluckman. 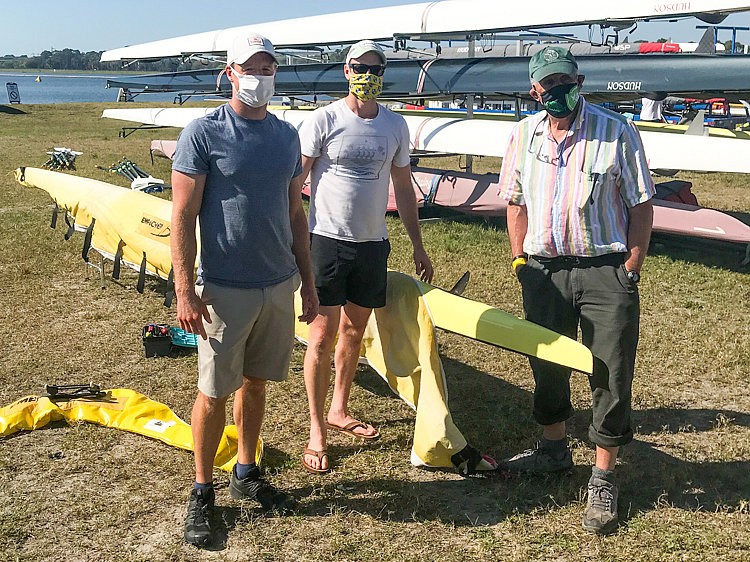 Tom Graves, Peter Graves, and Gluckman 'standing around John's boat while he was being drug tested after winning trials' (photo thanks to Peter Graves)

Peter Graves, who was coached by Gluckman both at Trinity and as an elite rower, elaborates:

"Apart from my immediate family, Larry has had the single biggest impact on my life of anyone," Graves said today. "He transcends what it means to be a coach. He always joked with me that his coaching came with a 'lifetime warranty,' and he really meant it.

"I met him in August 2003. We both showed up for our first day on Trinity campus together, and the rest is history. From the moment our paths crossed, everything the Graves family did had Gluckman's mark on it, and vice versa. I feel very lucky to have known him and to have been coached by him. He left a deep meaningful mark on everyone he came in contact with. He showed me the true meaning of what it means to prepare, work hard, be a good citizen, and most of all - not complain! His rules: 1) nothing will work unless we do; 2) do more than expected; 3) leave the place better than you found it. Among others, those stick with me."

Graves visited Larry and his family last night in the hospital, and shared the following story.

"Larry is signed up to be John's (Peter's brother John Graves) coach at the final Olympic Qualifier. He was down in Florida at Olympic trials with us cheering his butt off and coaching. Last night when (Larry's daughter) Kate came down to the lobby, one of the first things she said was 'Dad wants to make sure that John is taken care of for racing in Europe and beyond. He wants to make sure that he keeps focused on his goal and that he loves him.'

"It's the most 'LG' thing I've heard. He is literally coaching until his last breath.

"I already miss him so much but I know he will live on in all of us. " 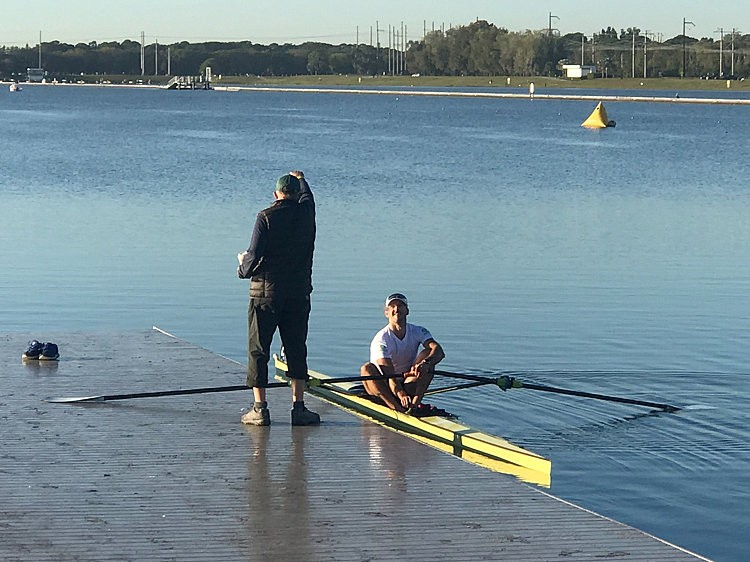 "Larry's coaching achievements throughout his career are nothing short of incredible," said Kevin MacDermott, who coached under and then succeeded Gluckman as the Trinity head coach. "At every stop on his coaching odyssey, he instilled excellence, enthusiasm, and genuine passion for the sport. During his time at Trinity, he guided crews to unprecedented heights, inspiring a generation of rowers and coxswains to reach for, and achieve, audacious goals." 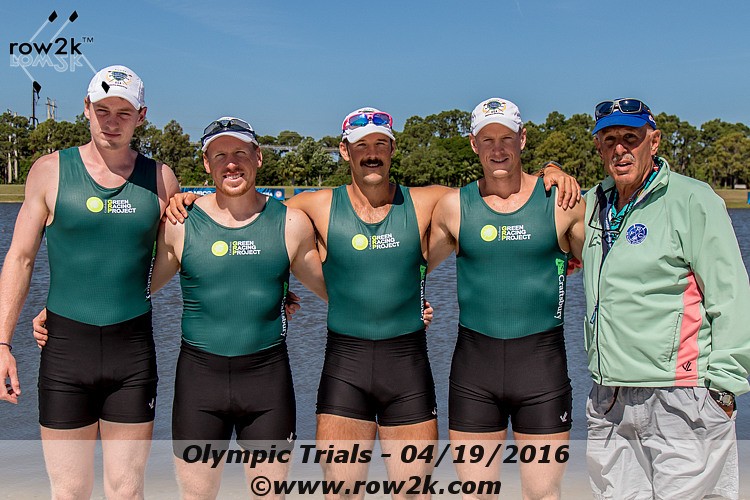 "Larry had dozens (perhaps hundreds) of wonderful mantras, mottos, and idioms. One of Larry's most used mottos during his time at Trinity was 'Participation with Excellence,'" MacDermott said. "Everyone was welcome at the boathouse - from the top recruit to the most raw walk-on - and everyone - from the Varsity 8 to the 4th Varsity 4 - received Larry's undiminished, undiluted expertise and enthusiasm. If you committed to participating with excellence, Larry loved you. It perfectly expressed LG's egalitarian approach, his love of the underdog, and his love for the meritocracy of sport."

This video captures these sides of Gluckman very well:

(By the way, check out the bow-coxed eight!!)

While at Princeton, Gluckman was integral to the creation of a boathouse culture that had unrivalled parity and cooperation among all programs; the situation became a model for other boathouses for a long time. He took the same ethic with him to Trinity, as evidenced by MacDermott's comments above, as well as in the following video.

"Larry was a force in my life and career," Curtis Jordan, his former colleague at Princeton said. "He did not get the credit he deserved for the revival of Princeton's programs revival in the 80s and 90s. He did the hard work that made the Princeton boathouse a great place to row and coach. We were all just disciples of Larry and his philosophy of good, and lived off his hard work. I know that I am not the only one who was blessed to know and and call him my friend, but at the same time I think about all coaches and rowers that benefitted from Larry's presence without even knowing it. This is a man I will truly miss."

Dan Roock, who coached with Larry both at Princeton and Craftsbury for many years, expressed similar sentiments. 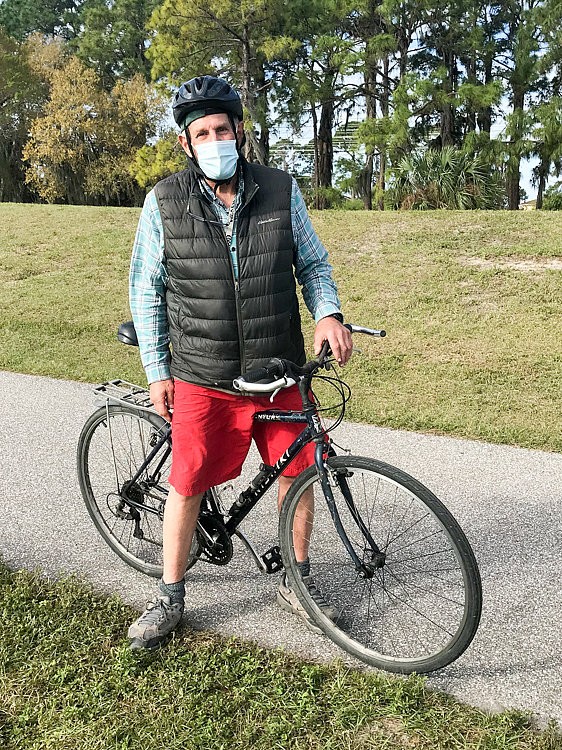 "Larry Gluckman spoke of leaving a place better off because of your being there; he just did that for the world," Roock said. "His impact on people was (is!) immeasurable. I could write a novel of examples of his goodness, generosity, guidance, and creativity - and another detailing all he did for the sport, especially for the Princeton, Dartmouth, Trinity and Craftsbury programs. Emphasis on programs. Larry may have coached the heavyweight men, but he helped everyone wherever he was. He was all about supporting his community, be it a boathouse or town; unselfishly, quietly, and modestly, with no need for recognition or fanfare.

"Recently he had been a guardian ad litem for children in need here in northern Vermont, along with volunteering for local environmental causes, coaching at the Outdoor Center, and being an ever-present attendee for projects and events. He will be missed dearly by people far beyond the rowing community.

"Larry was a great coach who shared his knowledge as a responsibility. I am so grateful to have had him as a mentor. Being around Larry was simply enjoyable. He was unique and always a force for good. I can’t do justice to his legacy, his influence, and his friendship in words. He was special. I miss him already."

Gluckman was a mentor to countless athletes and young coaches - he drove himself down to the trials and back and was quoted on row2k just last month - and the rowing world will miss him greatly. row2k joins the wider rowing community in our hopes that Larry's friends and family are doing as well as possible; thank you for sharing Larry's life with all of us.

We will update this article with service and other information as it becomes available.

This Week's Best of Rowing on Instagram 9/18/2021
Get our Newsletter!
SUBSCRIBE
Support row2k!
If you rely on row2k, please support row2k!
Advertiser Index
Advertise on row2k