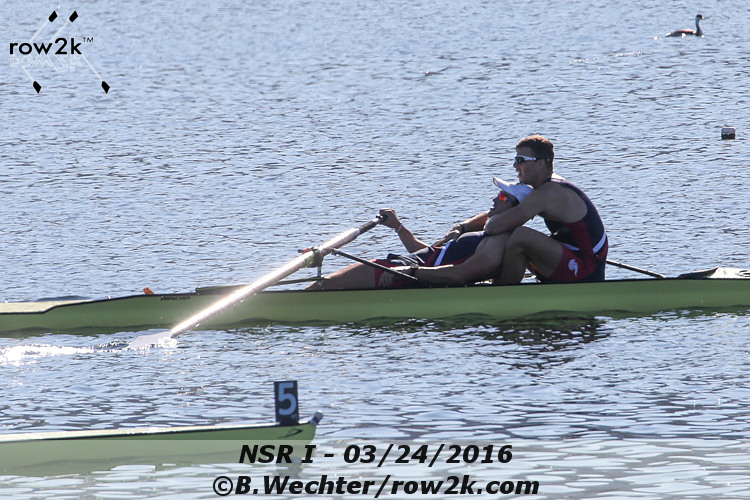 Rob Munn and Michael DiSanto, winners of the M2-

The athletes that raced this week in the only National Selection Regatta of the 2016 Olympic year carried months of work and emotion to the line with them for the finals Thursday morning.

When racing was over, that emotion spilled out. For Grace Luczak (Ann Arbor, Mich.) and Felice Mueller (Cleveland, Ohio), the winners of the women's pair event for the United States Training Center - Princeton, it was tears on the dock.

For Rob Munn (Redmond, Wash.) and Michael DiSanto (Boston, Mass.), the composite entry from USTC - Princeton and New York Athletic Club, it was a loud and happy celebration in their boat right at the finish line. The stakes at the 2016 USRowing National Selection Regatta I are high, and it was clear.

"As a team, we work so hard all the time, and definitely so over these past few days," said Mueller. "Grace and I, and hopefully the whole team, had so much fun getting to race and getting to execute. So to have this race go the way we had hoped it would go is just like icing on top of the cake."

Racing in perfect conditions on Otay Reservoir at the United States Training Center in Chula Vista, Calif., Mueller and Luczak took an early lead and held. USTC - Princeton's London gold medalist Meghan Musnicki (Naples, N.Y.) and two-time Olympic champion in the eight, Eleanor Logan (Boothbay Harbor, Maine) made moves throughout the course, but Mueller and Luczak did not relent. They crossed first in 7:02.14. Musnicki and Logan were second in 7:06.14, and USTC - Princeton's Amanda Elmore (West Lafayette, Ind.) and Tessa Gobbo were third in 7:09.20.

It was a different final for the men's pair. Munn and DiSanto, who typically have had good starts, fell behind in the opening meters. They had to zero in on the belief that they had put in the work in training and knew how they wanted to race.

"We knew what we were capable of doing. We had a plan, and we never deviated," said DiSanto. "We just wanted to go out and execute. We focused on the first three strokes of the start. Then we focused on our high strokes. Then we settled down into our base rhythm.

But they didn't. What they did do, was keep rowing with the belief that they could win. And in the last quarter of the course, they moved into first and held it across the line, winning in 6:33.16.

"Mike just told me to keep our heads and hearts in the boat and to stay locked in," said Munn. "The last 750 spoke for itself. We had our ups and downs this quad, but we've taken the downs and turned it into a positive result. We've been working really, really hard and to see it pay off is incredible."

"The race was tough," said Prendes. "We've been racing these guys all year. It's always been close, and we knew today was going to be the same. We're happy to have won. It's a great moment, especially in this Olympic year."

But for the winners in the men's and women's pair, the result was even more meaningful. The win carried the right to represent the United States in the event at World Rowing Cup II in Lucerne, Switzerland in May. A top-four finish at that regatta means an invitation to race in the pair in the 2016 Olympic Games.

What lies ahead for the two winning crews Thursday will be the decision to accept that bid if it is presented. For the women, it's a decision that can wait until May and the world cup. But the men have to make their choice sooner.

Because the men's eight did not qualify for Rio at the 2015 World Rowing Championships, that crew must be selected before world cup, in time to race at the Final Olympic Qualification Regatta in Lucerne, May 22-25. The world cup begins two days later on May 27.

"Right now we have a big decision to make," said Munn. "We have the chance to potentially represent the United States as the pair and go to the world cup and earn our spot. Or, we can go back to the eights group and earn our spot there.

"That's a big decision because this is one of my favorite boats to row with this guy, and we've got to take it all in."

In addition to earning the right to compete at the World Rowing Cup II, the winners of the men's and women's pair were awarded $3,500, which is being donated by the National Rowing Foundation (NRF) as part of the recently created Frank A. Shields awards.

The awards are given annually to one or more athletes whose performance leading up to the world championships or Olympic Games is deemed by the High Performance Director of USRowing to be exemplary.

Shields was an avid sportsman and oarsman who was the captain of the University of Pennsylvania rowing team. In 1980, he also founded the Power Ten of New York, an organization dedicated to the support of USRowing.

For the lightweight men's pair, the United States Lightweight Rowing Association donated a $3,500 award to the winners of that event.