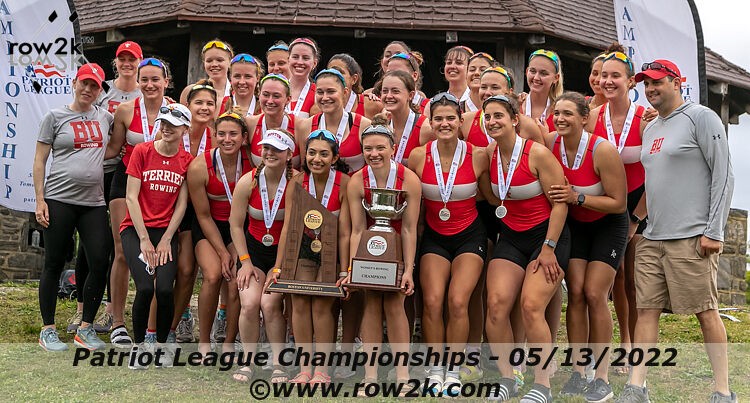 Conference Championships weekend is underway for NCAA D1 teams across the country and by Sunday, 11 of the 22 D1 team bids at the 2022 Championship will have been claimed via Automatic Qualifier—that is, earned by the teams that win their conferences outright.

It is a busy weekend for results following, live stream watching and points tallying: a bit of May Madness where a full year of work comes down to a day or two of racing—and then a few more days of waiting for the NCAA Selection Show for teams that miss winning on the weekend and have to wait to see if they can qualify via an At-Large bid. We will break it all down and report on each champion as the weekend unfolds.

Boston University claimed the first of these 11 AQ’s on the Cooper River Friday. The Patriot League wisely runs its whole championship on a day when it is the only show in NCAA D1 rowing—apart from the heats of the ACC Championship—giving its champion a day’s head start on the madness.

BU came in as the top seed, having largely run the table this year—to include a win against the six-time defending Patriot champ, Navy, at the Lake Wheeler Invite—and won the title on strength of two second place finishes and their first ever win in the 2V event.

Bucknell won the Varsity 8 final, despite being out of the points race and having only managed a third place finish in the morning heats against Georgetown and Lehigh, but they rallied in Lane 6 to provide some drama in the final race as BU and Navy—the only school in a position to catch the Terriers on points—battled for position.

With Bucknell taking that 1V gold, BU held Navy off to take the silver and clinch the championship on points, but as the races unfolded, it was the Terrier’s emphatic win in the 2V that proved a key to turning the day, and the points tally, in BU’s favor:

“The 2V really crushed it,” said Head Coach Madeline Davis Tully afterwards. “I think every boat did really really well. Every boat had a well executed race. But the 2V was really the keystone to the whole endeavor. They worked really hard. They've had a lot of movement in the boat recently and they've responded really well to that. Coming in here and just being able to show up and get it done—that was really fun to watch.”

BU had trailed in the points before that race, with Navy taking the Varsity Four final, but 2V put them ahead, on track to their first trip to NCAAs since Davis Tully took over the program in 2017-2018.

“It was a really exciting day and really a quite overwhelming day,” said Davis Tully, “because it has taken a lot of work to get to this point and concerted effort from from the whole program for a couple of years now. The whole squad has been really committed to this goal and to this vision.”

The timing of this championship, in this first full season back from pandemic rowing, was also significant:

“We've have a couple of fifth years that have chosen to stay around to do this. To be able to help them achieve this, what they chose to come here for and what they chose to stay around for? When a fifth year chooses to stay because they feel like they have unfinished business, as a coach, you definitely feel the pressure to help them pull through and be able to do that. So that part is particularly sweet.”

“All of this seniors have, have given so much to the program. And for them to be able to see this come to fruition is really, really fulfilling.”

Sarasota will be their next stop, after a few more weeks of training back on the Charles:

“We're excited to just get to spend two more weeks rowing together and get some more speed out of the group, because I think there's there's more speed to be had from these kids. They're fired up and I'm excited for all of them. It'll be their first trip to NCAA.”

For the BU program, this is their third AQ bid to the NCAA, and BU is one of the few, if not only, schools to have earned an AQ in two different conferences: BU first qualified as the CAA Champion in 2013 before making the switch in 2014, as a full athletic department, to the Patriot League in all sports. BU won the Patriot Championship in that first year, but this will be their first return trip since those back to back appearances.

BU which was not ranked in the most recent Pocock CRCA poll, but is receiving votes, will find out their seed for the NCAA Championship during the NCAA D1 Selection Show on Tuesday.

NCAA bids may be about the team tally, but this traditional sport loves a varsity eight winner, and Bucknell’s top crew delivered a classic “Lane 6 on the Cooper” charge to claim victory—complete with longtime Bucknell coach Steve Kish biking furiously alongside through the grass to catch the finish.

It was Bucknell’s first 1V win since 2012, and a one spot upgrade on the second place they put up against Navy last year. 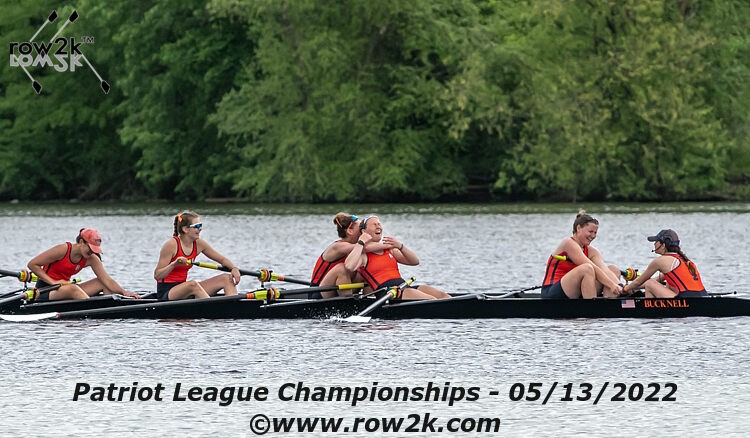 “A big focus for us this year is just being as internal as possible as a boat,” said bow seat Liz Berlinger. “Especially being in lane six and not having any idea where we were, and having to just rely on each other and the voice of our coxswain [Juliette Gaggini] to just guide us through the race, I think is what did it for us. Especially with the training that we put in from the beginning of the year until now, just knowing that we're going to trust what we're doing because we can't control what our competitors are doing. But if we know that we're going to turn over every stone possible in our training and every race experience leading up until this one, then obviously it's going to pay off, so we're so thrilled.”

Berlinger’s partner in the bow pair, Kate Meerscheidt, agreed: “I think it really was a culmination of just hard work over the past several years, even like the women before us. Just knowing that we could come out for the people that aren't here, the people that couldn't row in 2020, and just really represent and just have faith in our selves, our teammates, our boat mates and the race plan. Just really trust the process and trust that, you know, we had it down pat, if we just believed.”

Kona Glenn, the four seat, called the race a lot of fun: “I was pretty confident. I knew we could win, but obviously like we hadn't been getting first regularly, so it was it was definitely nice to pull ahead. I had no clue where we were the whole time, since we were all the way out in lane six, so that when our coxswain was telling us, ‘We have bowball on three seat of Boston,” I was so excited because just here we could like we could just sprint and go for it.”

Hayden Groves the three seat, added: “I think we just really worked together. Honestly I had some expectations but was trying to go to it with an open mind, knowing that anything could happen. I think, just these past few weeks, we've worked together really hard as a team. Everything has paid off and we've had really great sportsmanship among everyone, so I think everyone believing together really paid off.”

Perhaps fittingly, the 2022 Patriot Championships saw three different schools atop the event podium—Bucknell in the 1V, BU in the 2V, and Navy in the V4—as well as strong finals appearances by Georgetown, Lehigh, MT and Colgate, so the league has continued to get more competitive since the advent of the Automatic Qualification system.

Watch for our report tomorrow on the winners of the three conference championships in the blocks on Saturday: the ACC, the A-10, and the West Coast Conferences, and follow all the results on row2k.