Washington is the 2019 NCAA DI champs

If the NCAA DI field was close going into today's finals, the Washington Huskies absolutely blew it open today, finishing off a three-event sweep of the DI events, and capturing the team title in the process.

With the order of racing reversed, the hotly anticipated Varsity eight was the second race of the morning, and it did not disappoint. The race featured a hot start from Michigan, several lead changes as Texas charged to the front, and finally, a push from Washington that pushed them ahead for good and left only marginal doubt as to the final outcome, pushing their bowball in front of Texas with about 15 strokes to go, and hanging on to win by 7/10s of a second.

All crews in the 1V final overlapped for the entire 2000 meters of the race, and the race is well worth a rewatch if you can find the time. 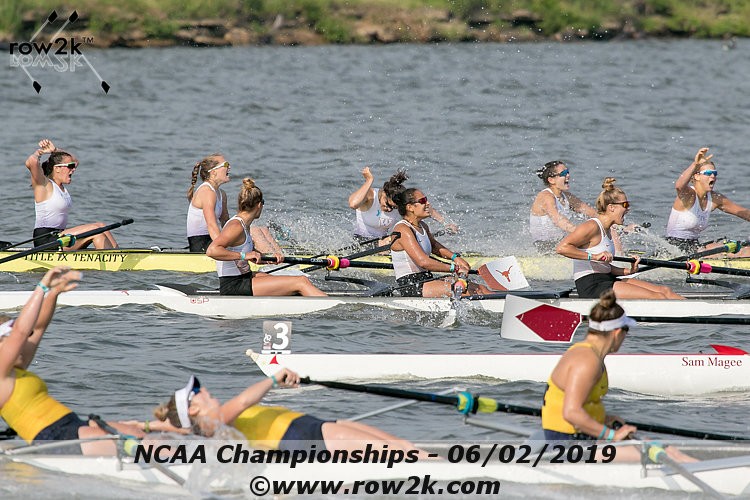 "I never seen a boat drive that hard to the finish line as in that race," said Washington coach Yaz Farooq. "I think I died about three times. That was just sheer human will, will to win."

"We went into that race feeling super free, there were no expectations, and there was nothing to lose," said Washington 5-seat Marlee Blue. "At the end of the day all of those boats are so fast, so competitive, so close, it wasn't about who was faster. It was about who was going to race that race."

Although there is a perennial expectation that Washington will be fast, given the UW's 3rd place showing in the 1V at the Pac12 championships a few weeks ago, and the competitive depth in the event overall, Washington was never a lock or a favorite for this title.

"We always thought of this as a three day regatta," said Blue. "We were not an undefeated boat coming into this regatta, and we weren't undefeated during the regatta either. We got 3rd at the Pac12s and we lost in our heat here to Texas. I think that through all of that we never lost faith in each other and the process, and it was always just about building. We believed in representing the work we put into the season. We just wanted to have a race that we thought represented everything we put into the season, and everything we've been through. I think we did that today." 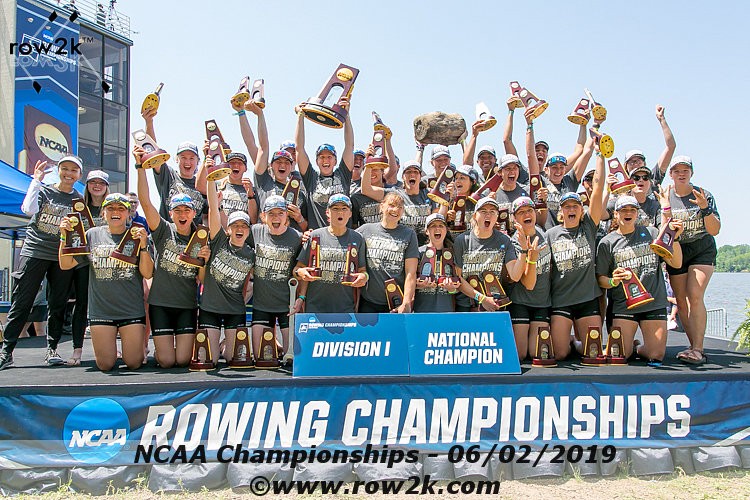 The Varsity and 2V events had matching Washington-Texas-Michigan finishes, while the Varsity Four went Washington-Stanford-Texas. And if the 2V and V4 races didn't have quite the same intrigue as the 1V held to open the day, at least by the time Washington took the win in the 2V, most folks were guessing that this might truly be Washington's day.

In the 2V, Texas staked the field to an early lead before the Washington 2V, who have been pretty dominant throughout the season, edged into the lead with 500 meters to go and reeled off a strong closing surge to take the win, while in the Varsity Four, the Huskies also came from behind to pass Stanford just past the halfway point, then ran away with the last half of the race to seal the win, and the team title.

Weather concerns prompted officials to reverse the order of events for the finals, so the Varsity eights raced first, followed by the 2V, then the four. For Washington, the reversed order meant that it would be the Varsity Four that would have the chance to clinch the team title, and the for Huskies, who live by their team depth, the significance of the lowest ranking boat sealing the deal was not lost.

"We talk about it all the time," said Washington's Farooq. "The strength of this team is its depth. Look at that varsity eight for example, nearly everybody in that boat has spent a significant amount of time in another boat on our team before they were in that boat. At the championship, we always talk about our strengths and our teamwork within each boat, and across all boats. We talked about it last night before the finals. Everybody went on the water, not only pulling for the people in their boat and the people that are here, but for all the incredible people back home who supported us this entire year." 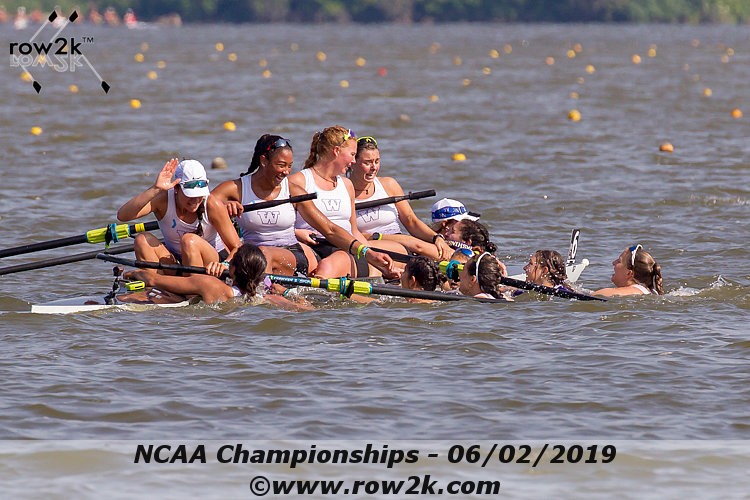 The Varsity Four clinched it for UW

"It's unreal," added Blue, who raced in the Varsity Eight. "It feels just like we were so excited to be part of such a competitive day across all the boats. I think having the racing order reversed and having the four be the one to end the championship for us and win it all, that is the most meaningful thing. I think that's representational of our team. For us, it was just about pulling for each other, and pulling for the girls back at home, all the girls that couldn't be there. It was about something so much greater than us. I can't imagine feeling this way about another group of girls again."

Overall second-place team Texas feels well and truly arrived in the top tier of rowing schools in the US at this point, and with each Texas crew in the finals not just in the mix, but challenging for the win in each event, is illustrative of the team's journey over the past four years. 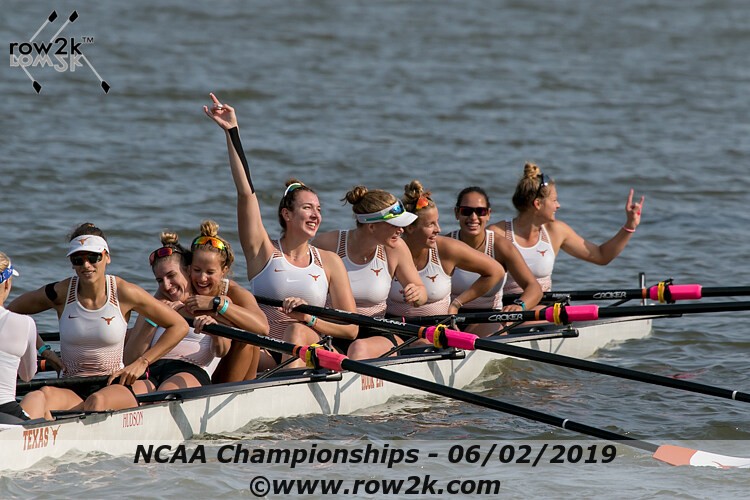 The Texas 1V was ecstatic with their result

"It's been a long journey," said Texas senior Kendall Chapman. "Following this team from the very beginning when we came in as freshmen, not really knowing how well we were going to do, but knowing we had a good crew behind us in our coaching staff as well as great teammates, and seeing how far we could push ourselves to get that goal. Reaching every year for the top held us accountable."

Chapman, who raced in the Texas Varsity Four at the NCAAs, had a front row seat as the depth of the team increased each season. "My freshman year I raced at NCAAs in the second eight and then the past two years, my sophomore and junior years, I didn't even race at NCAAs," she reflected. "The team just keeps getting tougher and tougher. We really are driving each other and there is a lot of competition within the team, amongst the boats. Knowing how hard it's going to be, knowing how competitive it is, using that whole force behind you and bringing each other up instead of bringing each other down helps us get to where we are."

Texas senior Fanny Bon, who raced in the Varsity eight, was part of the first class recruited by Dave O'Neill and his staff. "The senior class took a chance on Texas by coming here," she said. "We trusted the coaching staff in the sense that we believed in a program that would become a legacy instead of becoming a part of an already existing legacy. I think that because we knew that we had to start from zero in order to get there, we always have been able to push ourselves further and further because we've always known that we don't have anything to lose. You have to stay humble and hungry the whole way through. I think we've never gotten complacent as a team and that's why we've been able to push ourselves so hard." 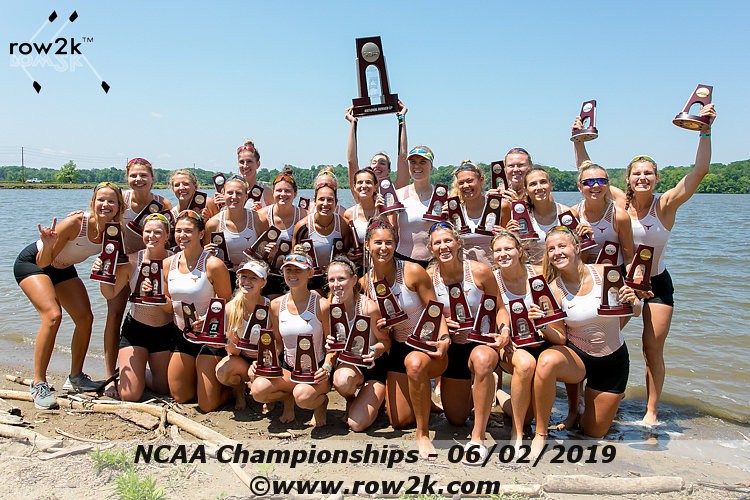 Head coach Dave O'Neill tried to sum up the historic day succinctly. "We kept the plan really simple for the day and focused on the basics," he said. "Tight and pressure-filled races like we had today required a ton of character, and that really showed in each boat. We have a lot of characters on our team, and they have a lot of character. That first eight race was probably the tightest I've seen at this championship, and I've been to quite a few now. Of course, we were looking for the win, but credit to Washington. They deserved the victory, but I'm super happy about the work we've done and where we are and where we're heading." 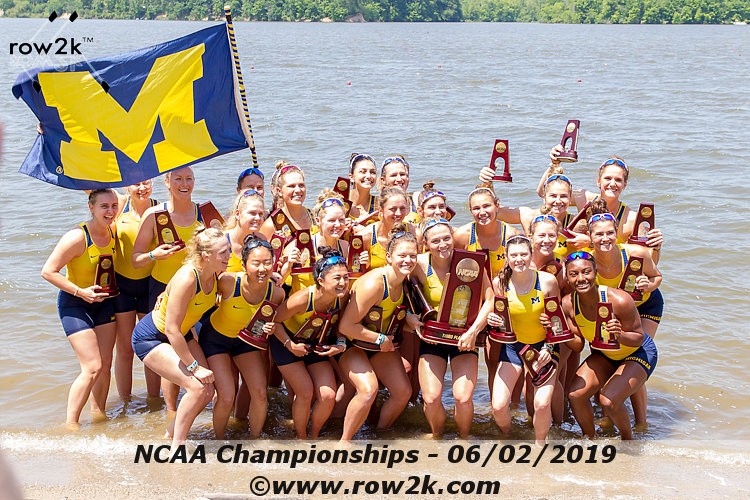 Michigan repeated their 3rd-place performance from 2017

Third place team Michigan had been solid but quiet during the Championship, but the Wolverines turned it on for the finals, reaching the podium in both eights with fierce, unintimidated racing. "We didn't really talk much about strategy," said Michigan head coach Mark Rothstein. "It's just really go out and row, row your best, row what you're capable of, and just stay in tune, make sure we hold on to the back end, and make sure we're looking after the boat on the recovery, keeping it light. I think we did a really good job of that. I was a little surprised that we got up that much; wasn't necessarily the plan." 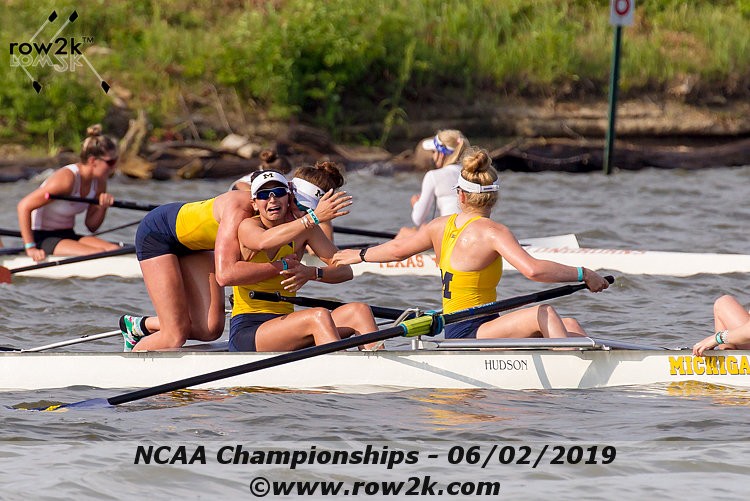 Michigan raced at their best on Sunday

In finishing third overall, the Wolverines set a program record for points at the NCAAs. "We just wanted to have our best race on Sunday, and we were able to do that, and we had a good result," said Rothstein. "It's right up there with our best years. I think this was a really fast year across the board, it looks like the sport is getting faster every year and we're just trying to keep up."

A few observers noted that a few of the favored teams and eights racing in Indy this weekend didn't necessarily have a stellar showing at NCAAs, despite racing outstanding conference championships in May. Some theorized that, as the NCAA field gets deeper and faster, teams no longer have the luxury of multiple peak performances throughout the season, it's NCAAs or bust.

A few folks remarked on how fast US women's collegiate rowing is nowadays, and they are definitely not wrong; a look back at the results of the first women's NCAA Championships, back in 1997 confirms this. In winning the NCAAs 22 years ago, the Washington 1V rowed to the win in 6:31; in 2019, that time would have been good for 6th place in today's C-Final, 18th place overall.

With each day of the competition necessitating some sort of a schedule delay, lane switch, or other adjustment, it would be understood if folks were somewhat frazzled. The officials contingent, however, kept things steady with characteristic midwestern understatement. "Sometimes you just have to retwizzle things to get everything to work," said one.

The final attendance tally for the three days of Women's NCAA Rowing Championships was 3,676 spectators.

Stormy weather along the eastern seaboard marooned a few teams in Indianapolis for longer than expected; anyone playing NCAA team bingo on Sunday night in Indy would have done pretty well. Here's hoping everyone got home in one piece! 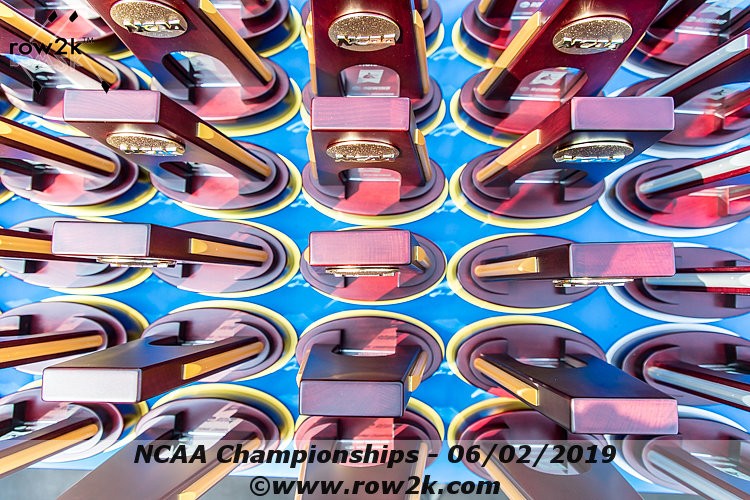