In sports, you'll often read about a team being "crowned champions," but at the 2019 NCAA DIII Championship, no one was going to crown Bates anything--they were going to do it themselves. For Bates head coach Peter Steenstra, this was part of the team's approach.

In a competition that took place in less than 24 hours from heats to awards ceremony, the Bates women left no doubts about their ambitions from the start, taking both the first and second eights event in pillar-to-post wins. Both races stayed close through 1500m, with WPI and Wellesley crews gamely overlapping the Bates shells to that point, before Bates pulled away to win both races by open water; a tribute to lots of erging during a longer-than-normal Maine winter perhaps?

"I don't know that we've ever had a typical year, but it was definitely a very late start," said Steenstra of a spring that saw them lose a rare regular-season race, to WPI in April. "That was our third regatta, and we still hadn't practiced on the water yet. So we knew that we were still in a good position even with that loss...it just motivated us anyway. But it didn't change anything we were going to do, we stayed very intent on what we were going to do. These women are great. I'm not that great of a coach, it's just the fact that they have such a desire to do well at anything that they do." 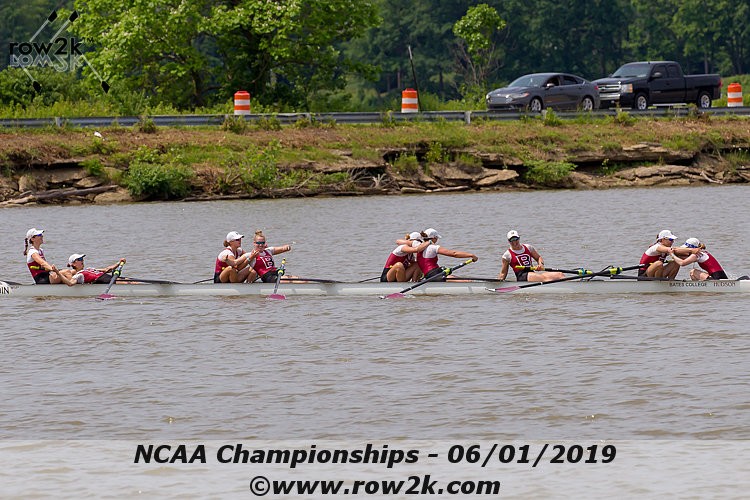 The Bates 1V crosses the line

Bates Senior captain Lena Rintell echoed Steenstra's sentiments. "It's not easy for us up in Maine. We hardly get on the water most of our season, it's cold, there's ice bergs, and the erg becomes our friend. It takes a lot of grit. I think leadership and all of that aside, it's being present and embracing that we are who we are, and we're going to have to fight through the entire season."

As someone who experienced the rise of Bates women's rowing over the past four year, Rintell pointed out that the team always remembered where they came from. "My first year at Bates was the last year we were in the old barn," she said. "My sophomore year we had a new boathouse built, and our success has earned that. What we had to do is remind the rest of the team that we used to sit outside in the rain and do our stretching out there. No matter what we have and resources we get, it's really all about taking in where we are - the scene, Maine - and embracing those hard parts and saying 'this is how we do it. This is how we get fast,' not the fancy things, not the advantages, it's the hard parts that are really how we do it."

Both Steenstra and Rintell were clear about putting the win into perspective.

"I think that grit, that energy, that mentality, that is what reminds that it's not easy, and we do work for it all season," said Rintell. "It's just the icing on the cake when we get here." 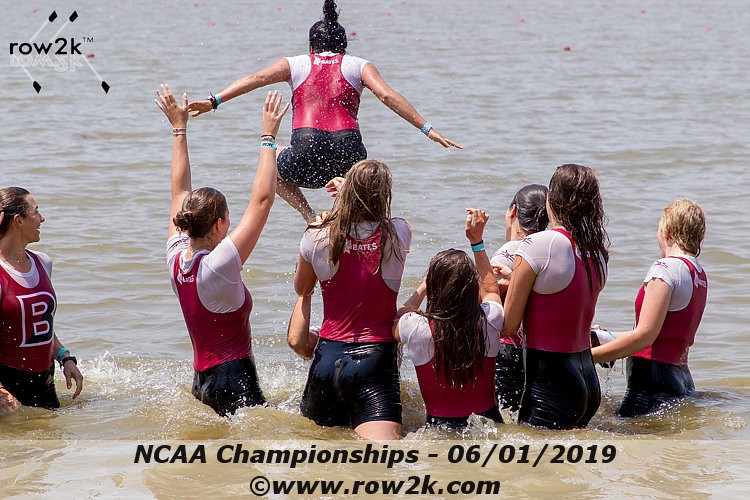 "Look, here we are splashing around in the river right now, because they should embrace every second of the fact that they became national champions," said Steenstra. "Tomorrow the trophy goes on the shelf, and that trophy just sits on a shelf in my office and collects dust, or it's in the lobby of the alumni gymnasium collecting dust. No one's going to give us a head start next year just because we won three in a row."

Coming in second behind Bates in both the 1V and 2V was WPI, who continued their steady march up the DIII ranks this year, upgrading last season's third place finish to second this year, or "Runners-Up" in NCAA parlance. WPI served notice that they were serious early in the year, knocking off Bates in April and carrying a #1 ranking for part of the year.

For head coach Jason Steele, WPI's evolution has been a testament to his student-athletes dedicating themselves to taking the program higher.

"We just started the process two and a half years ago," said WPI coach Jason Steele. "We very fortunately had an extraordinary group of sophomores then who are now seniors. I can actually pinpoint it. We did a trip to England in summer of 2017, we did the Women's Henley. We had a really nice meeting at the end of the regatta and said, 'what do you guys want to do?' They said, 'this is where we want to be: we want to be at the NCAAs, and we want to be winning the NCAAs. They were willing to work for that. They just really guided the team in terms of leadership, work ethic, and the types of things that we all know are necessary to compete at our level." 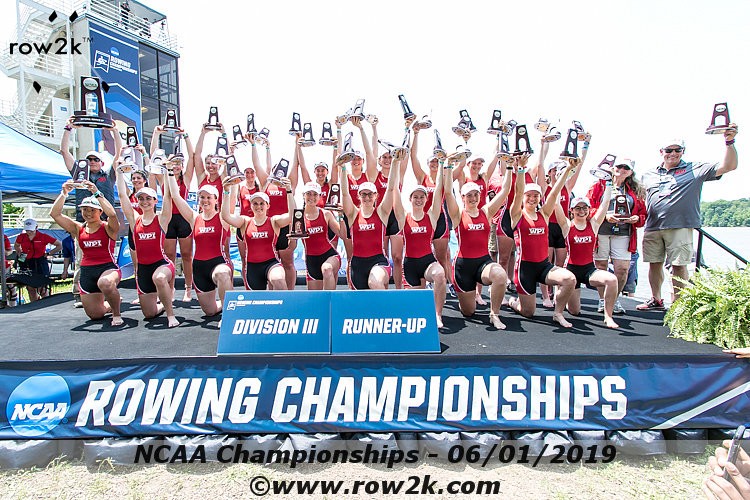 WPI moved up to 2nd

After coming in third in 2018, did the team consciously step it up? "Honestly, we didn't do anything differently this year, there was just a continuation," said Steele.

"We knew it was going to be big undertaking here. I think the 1V had the race that we expected, the 2V had the race we hoped for. Everybody wants to win, and everybody went for a win. Bates is a great program, there's no doubt about that. They're the defending national champions, and national champions again for a reason. We knew we probably caught them a little off guard when we beat them early in the season. I think everyone was really proud of what we accomplished in both boats. I'm totally fully satisfied. Hopefully we'll keep the process alive, third last year, second this year, and we'll see if the trend continues."

With only eight teams comprising the DIII championship field, it's no surprise that the competitors are a close-knit group. Indeed, when Bates started singing "Happy Birthday" to a teammate while waiting for the awards ceremony to start, it seemed only natural that WPI, Wellesley and Wesleyan would join in, and they did.

The teams who did not make the podium today--Ithaca, Hamilton, PLU and Washington College--nevertheless stuck around for the awards, whether it be to finish out their competition with "being there," or ambitions for the coming season. The size of the DIII championship makes the competition feel anticlimactic to the efforts put in throughout the season, and an observer might hope that, maybe down the road, this championship gets bigger. 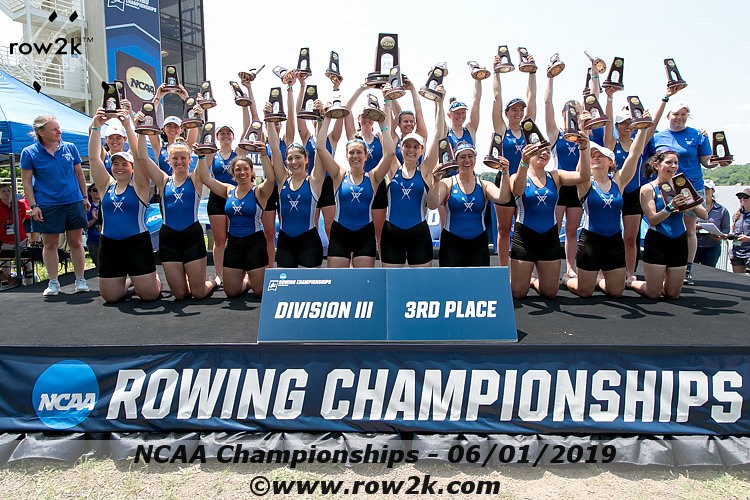 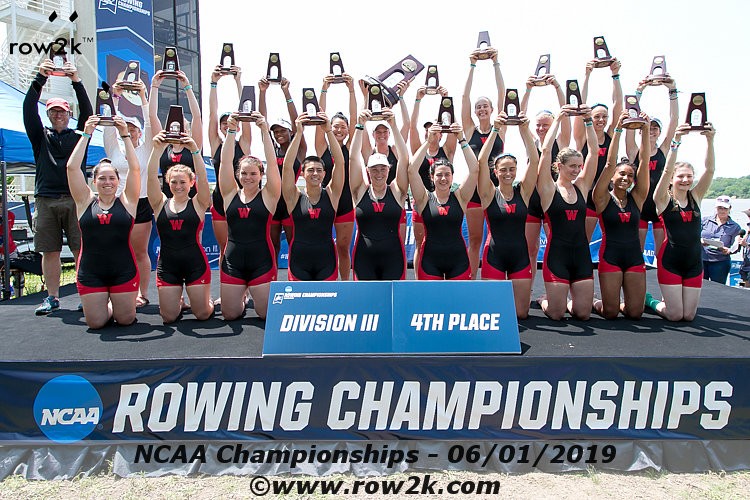