Six explosive semifinal races set up the NCAA DI finals for tomorrow, and five teams in women's collegiate rowing that will work out the team championship amongst themselves.Michigan, Ohio State, Stanford, Texas and Washington are the five teams that have qualified for every grand final. Cal's Varsity eight and Varsity four and Virginia's 2V are the only other crews in the A-Finals.

"Semis day is way harder," said one coach. "The thing that we always tell the athletes, you can't win the championship on semi's day, but you can lose it." 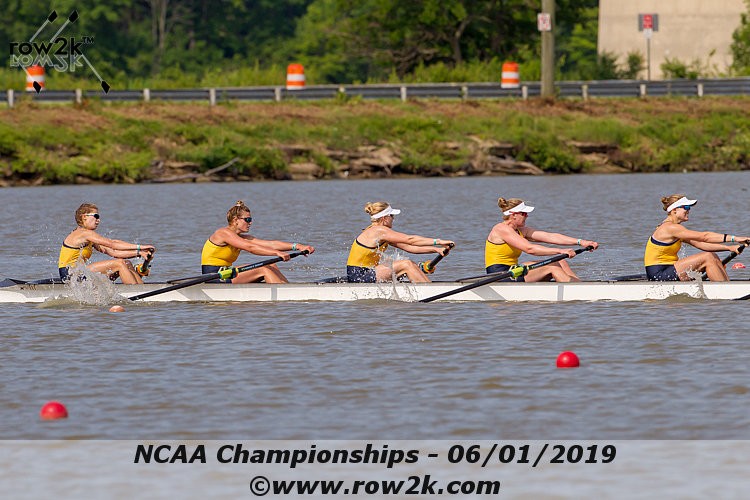 The California V8 set the standard in the semis

For the defending champs from California, the semis were the end of the road for their hopes of any kind of team repeat, as their 2V eight failed to qualify for the A-Final. On the flipside, the Cal 1V put up the overall fastest time today, and is clearly one of the favorites in tomorrow's final. Head coach Al Acosta acknowledged the bittersweetness of the day after the racing.

"In real simple terms, you just want every boat to have their best race every day, and then let the chips fall where they may," said Acosta. "Stuff is not in our control, and I just have to live with it. The 2V is pretty broken up about the race, but it was their best race of the year, and after a while, they'll come to terms with that, we'll all come to terms with that. I'm really proud of their effort in the same way that I'm proud of everyone else's effort."

Turning his focus to his 1V, still the favorites to win, Acosta was circumspect. "They weren't that good in the heats. They fixed it with the semifinals. So, I think they feel like they can go a little faster. It was really cool to see them do that today. Hopefully, it'll be a good race tomorrow. Ultimately they need to trust in one thing, whatever that is, and they do. They trust each other a lot, so that's the most important thing. There are so many variables out there that we barely control for ourselves, so we'll work just focus on us."

Washington coach Yaz Farooq admitted that she was surprised at how many teams qualified all three crews for tomorrow's finals. "I think this might be the most competitive NCAA finals and run for the podium that I can remember in my time coaching. We are just really glad to be in that." 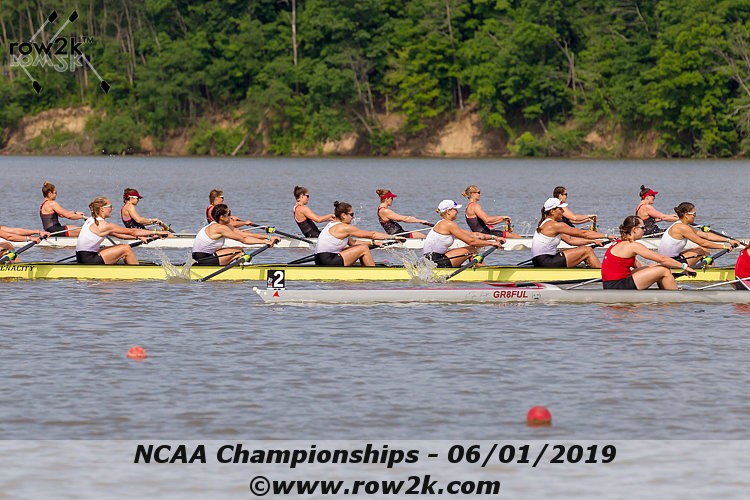 The Washington Huskies didn't put a step wrong in the semis today, winning each of their races (Stanford won two semis, and Cal the other). Farooq reflected on the work it takes to get a program to that level of consistency.

"You're only as strong as your youngest, and almost inexperienced person, so we really believe in building a team top to bottom," said Farooq. "Beyond that, you just have to take the best advanage of the resources that you have. I feel really fortunate that at Washington, we have year round water, and the boathouse is on campus. So we can be on the water a lot, and do a lot of small boat training. We can really hone on the skillset especially with the developing rowers."

As far as her team's chances went, Farooq wasn't willing to be called the favorite for the team title just yet. "It's not a lock for anybody, especially this year. I think that the racing these last two days has just been incredible, and I know that we're going to have to bring our best tomorrow. At the same time, we talk about this all year long, and I think one of the coolest things about the NCAA is just how competitive it is. Internationally, you're just seeing the level of women's rowing rising, because you have so many women who compete at the NCAAs. Outside of the Olympics, you will not see more photo finishes than you will see at this regatta."

Not necessarily on many observer's radars, but arriving at Indy in precisely the shape they needed to be in is Ohio State. The Buckeyes followed up strong racing in yesterday's heats with steely resolve in today's semis, and have gone from outsiders to contenders here in Indianapolis.

"It's been a difficult spring for us in a lot of regards - injury and illness. It's taken us, mostly me, a long time to figure out who belonged where," said Teitelbaum. "As happens a lot of times in coaching, we made a switch and we got a little bit fortunate and it showed us some more speed that we had been seeing. But it's an interesting thing, because when you're rowing around on your own body of water, even when all the technology, buoy lines and GPS's and everything, you can start to see things that look promising, but you never really know until you race, or you show up here. After the heat, we're like 'wow, we really are performing at a better level than we have been.' For me, I wasn't that surprised, I understood after what we were doing in practice that we might be a bracket buster in the varsity." 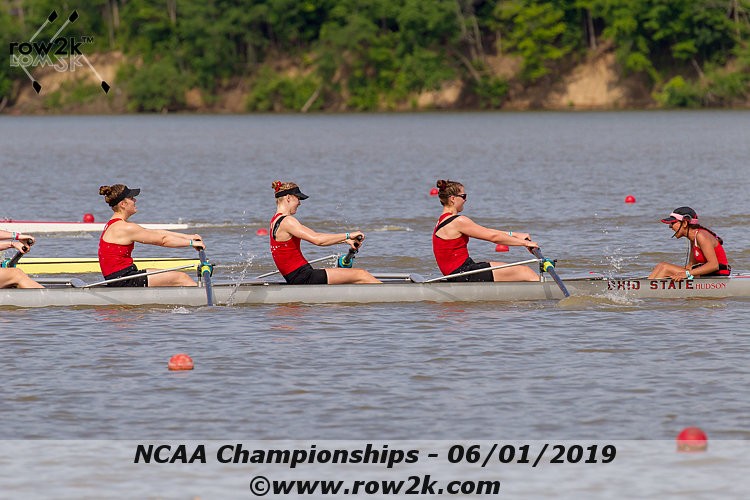 Ohio State set themselves up as the bracket buster

"Every time you row a boat race, it's a new race, and that's something we drill into our kids," said Teitelbaum. "They already have done an amazing job putting us in the position we are, because it's an incredibly, incredibly young group. We're only racing with two senior rowers right now. Over half the roster has never raced at the NCAA championships before. A lot of things need to fall into place in order to win a team championship, and a lot of them aren't within your control. So I couldn't be more proud and humble on how far they've come and how much of a great time it has been to get us here. Tomorrow is going to be a really, really exciting"

After having qualified all three boats for the A-Finals for the second year running, Texas is now well and truly arrived in the circle of elite programs. "From the outsider's perspective, seeing Texas move all boats to the grand finals seems new," said Texas coach Dave O'Neill. "But, from the inside, we just do our work. The seniors on our team are the first group that (the current Texas coaching staff) recruited. It is good that having all boats in the final feels normal for us. It's like, 'yeah, that's what we do.' We knew that semifinals were going to be tough racing, and we know that we're going to have to step it up even more for the finals." 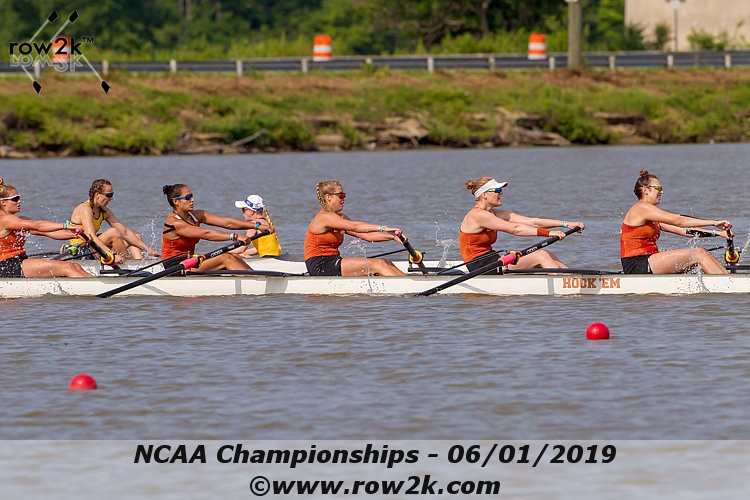 Texas is aiming at the podium

Another two hour delay to the racing had a few folks nervous for a repeat of the previous day, but once racing got underway, it stayed that way without a hitch.

Best post-race interview reference by a coach today was to Jeff Spicoli, of "Fast Times at Ridgemont High." 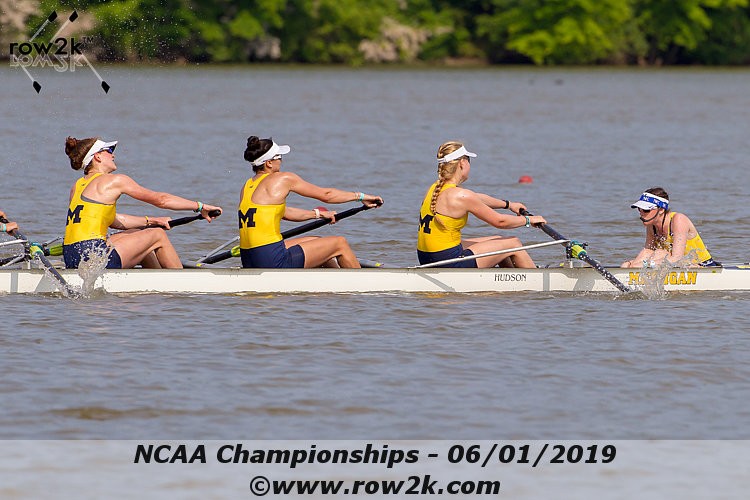 Michigan also has all three crews in the Grand Finals 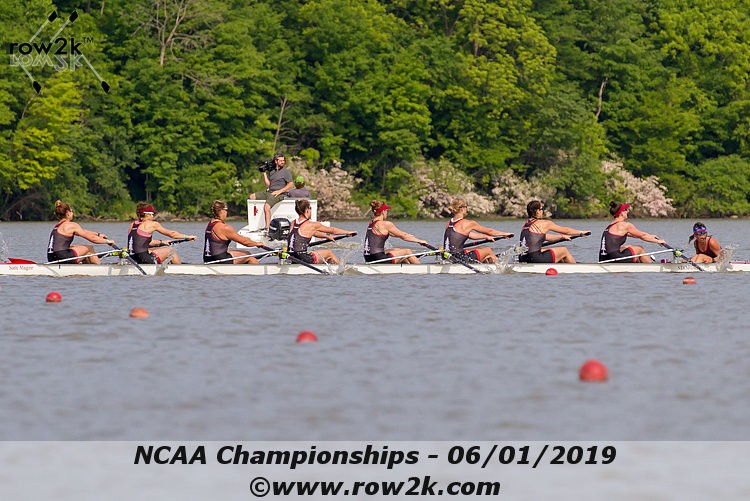