Yes, NCAA Saturday ended again with Williams winning it all, with plenty of purple on the podium, with Bates a happy but not fully content runner-up, and--on the course--with still some water to be made up between the Williams title machine and the rest of DIII.

That said, this title is not like any of Williams' other seven (!) titles, and not just because no two title runs are ever really the same: this year's Ephs squad had a new coach, a host of new faces (and, let's face it, even the Williams seniors were just starting high school when this streak started), a whole new event to win--the 2nd Varsity Eight--and, in maybe the most notable change, a pair of crews still overlapping the Williams stern at the finish line--even if only barely, this was the closest DIII podium in several go rounds at the NCAA.

First year Williams Head Coach Kate Maloney was quick to credit the hard work of the teams and coaches who proceeded her at Williams, and atop the DIII podium: "I'm just riding the wave," she pointed out, but that is also good coaching-knowing when the athletes can lead. "I listened to the kids," she told row2k, "listened to what they needed and what they wanted, and tried not be the stick in the spoke of this wheel. If you have an open ear--and as a coach, that is so important--the kids, right or wrong, will tell you what they need at that point in time."

Maloney's approach to the racing here with her squad was no nonsense and full tilt: "I'm not into games," she said about the big margins Williams put up in the prelims. "I believe these athletes are tough enough to go 'full tilt boogie' for two full races, so we went out and executed the races that we needed to execute in the heats to give us confidence."

Ahead of today's finals, which she knew would be tighter, she told her crews that they would need to be ready "to access that little bit of reserve that you have been saving all season long, to go out and want to dominate, and that is going to involve accessing an aspect of your athleticism that maybe you haven't called on yet."

Perhaps Maloney's deftest touch came a month or two ago, when she sat the team down and gave them permission not to be the favorite, the defending champion, the streak-holders: "I told them don't wear that mantle; don't do it, because all it going to do is weigh you down. Instead, she wanted them to know that, when it comes to winning the NCAAs once, or for an eighth time, "it's not about what happened before or what is going to happen after, it is about the situation that exists right now, and the competition that exists right now."

In the 1V8, the racing behind Williams for second was intense, and both Bates and William Smith pushed their bow into second over the other in the third 500 for a few strokes, if not much longer, as the other crew saw each move and responded in kind. Bates coach Peter Steenstra credited his coxswain afterwards for tweaking the race plan to counter William Smith's charge; in the end, she gave her crew just enough to snatch second for good in the sprint.

Last year's silver by Bates came nearly as tightly, of course, but the difference here was that Williams never really got away from the scrapping and fighting in the pack. While the outcome may not have really been in doubt, it is clear that DIII is tightening up, and row2k overheard one Williams rower admits as much when she said it was "more of a race than we are used to." High praise from a champion for the field.


"Division III is an exciting place to be" said William Smith Head Coach Sandra Chu, after the awards ceremony. Her Herons were up a spot, and onto the podium, this year, finishing fourth as a team on the strength of her V8's close third place. "You come [to NCAAs] and you watch Division III racing, and its good racing," she said. "On the one hand, you're excited that the crews are really competitive, but on the other hand, as a coach, you are always fighting off that ulcer--and that's the high quality of the racing."

The secret ingredient in Division III, noted Chu, is the athletes themselves: "We don't have a lot of weeks coaching, so most of it goes to the student-athletes because, in those weeks that we are off in November through February, they're training on their own, and doing it by themselves--and it speaks to their character and what they want out of the sport."


In the second varsity race--getting an "event of their own" for the first time in DIII - the outcome was less in doubt, as Williams stormed away to win by a few lengths of open, but that wasn't really the point: with their own category to race in, these 2V's were not being overshadowed by the first varsities, and the spots they won against their fellow second boaters came were their own, instead of just being factored in with the rest of their team's points. Another first: spots on the podium and medals for these 2V's, a nice reward for the hard racing.

As in the 1V's, that racing was very tight even if Williams was cruising well ahead: Bates had to fight off Wellesley for second, who in turn pressed away from Trinity to put themselves in a good spot for third overall as a team. Even though his crew was just out of the medals, Trinity coach Wesley Ng, was excited to see the inclusion of this 2V8 event, which he called a "logical and appropriate" addition to the proceedings. "It was just some great racing," he said, and thought it was great to see that "the top three finishers will now get awards."

In the end though, one story is the same in DIII: seven of these teams are headed home with both Williams and 'next year' on their mind, and the eighth, the Ephs themselves, get another year's worth of setting the pace in Division III. 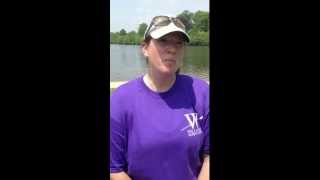 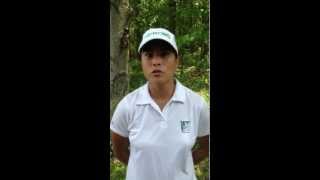 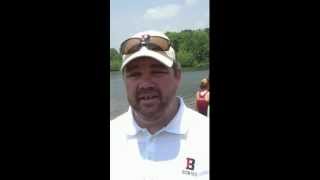