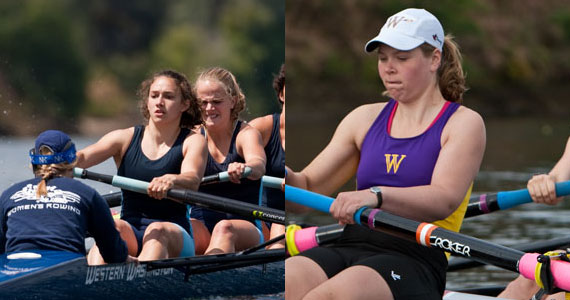 WWU and Williams are the DII/DIII frontrunners

Despite the nominal emphasis on the DI racing at the NCAA championships, the DII and DIII fields offer a wealth of athleticism and competitive racing.

In the smaller DII field, streaks loom larger; Western Washington is going for its “one for the second index finger” (i.e. 7th) consecutive team championship. That said, other teams are beginning to make some noise, best evidenced by Mercyhurst’s win in the DII V8 over WWU last year.

These two teams, Western Washington and Mercyhurst are the only schools still competing in DII to have won the team championship (UC Davis won first two, then went DI, then sadly went kaputt when they were defunded by the university).Of the two, Western Washington seems more on form going into the regatta; the WWU V8 was undefeated in DII competition on the west coast, losing only to DI Gonzaga and the UW 2V at Opening Day.

Mercyhurst's season has been a bit more up and down; they beat fellow DII entrant Nova Southeastern twice (at SIRAs and Dad Vails) and won the Vails, but lost (on a day when they were minus two V8 rowers) at the DII East Regionals to Philadelphia U. and Franklin & Marshall in mid April.

Mercyhurst and Seattle Pacific have the lone cross-country result; Mercyhurst beat SPU by 2.5 seconds to win Dad Vails. SPU's closest margin with WWU was 8 seconds, in early April, and the Loggers were 9 seconds back at WIRAs.

Despite a coaching change, and all the potential upheaval this could entail, the 2011 NCAAs see Williams headed back to the show seemingly as the team to beat. Williams is undefeated in DIII competition and was 5.48 sec clear at the ECAC Championships, and a full 7.5 seconds ahead at New Englands, traditionally a good bellwether for the DIII field.

Bates, which has been on the rise in the DIII ranks for some time, has been the closest to Williams in 1V and 2V, second to the Ephs at both at ECAC and New Englands. If Bates can find that extra bit of speed, they are likely the one team that can spoil the Williams show.

All six teams contending for the DIII title are from New York and New England, and all 9 NCAA champions in DIII have been from that region. Only once, in 2003, was there a runner up from outside NY/NE: Puget Sound, who will be competing at large in 2011.

The DIII format of a Varsity and a 2V eight offers some of the best team racing of the championships; with all the eights competing on equal footing, the perpetual challenge for teams is to get their 2V into the Grand Final, which virtually guarantees a team the overall title. Williams has been the best at this game historically, but watching the sheer gut-busting effort of a lower boat slamming strokes in to beat another team’s 1V is among the highlights of racing at the NCAAs.