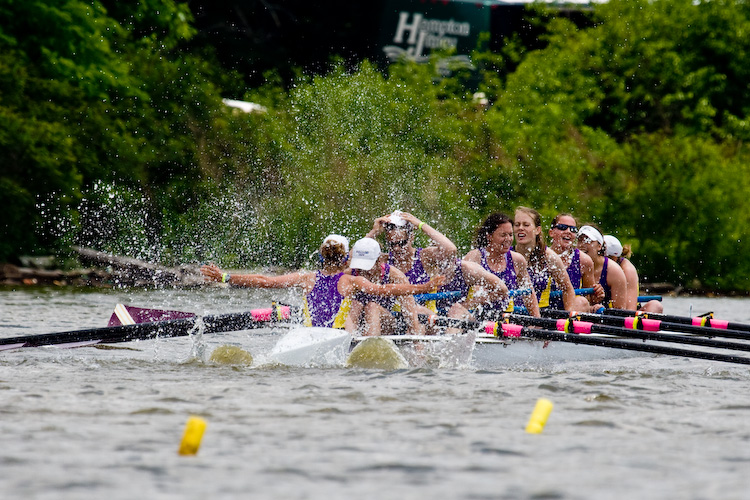 The Williams V8 celebrates their win

Cool temps and a tailwind greeted crews headed out onto the course at Camden this morning; in a tailwind, where crews stick around a little longer and the race happens a little faster, it takes just a little extra in the "keep your cool" department.

Williams hit the DIII double today, winning the V8 title and the DIII team title, in part on the strength of their 2V's 5th place in the Grand Final. Williams is no stranger to the team title, having won it the past three years, but this marks the first time since 2005 that coach Justin Moore has seen his V8 at the top of the podium as well (in 2007, the last Williams V8 win, Moore was on sabbatical and interim coach Pat Tynan hoisted the trophy).

Though the Williams V8 ran the race from the front, it was never comfortable with Trinity and Bates pushing Williams hard all the way. "What a boatrace to be a part of," said an elated Moore after the final. "A lot of people have us worried, we felt the field was going to be really strong this year, we knew we would have to be healthy and primed, and it turned out that was the case."

The Williams V8 is a true mix of young and old, featuring four seniors and three freshmen. "The new kids just jumped right in, and they've been so positive and energetic, and we were fortunate to have that bookended with some upperclass maturity."

Moore on the role of his fifth-place 2V in the team title chase: "The pressure was off them Saturday. We knew that if we could get them through the Grand qualifier, they would have done everything we could possibly have asked of them. We told them, if you guys can make it into the grand final, you are free to be just completely audacious, worst case you row your brains out, you finish sixth, it's still a great position for the team."

And does winning a lot increase the pressure on his team? "It depends on how the group handles it. No team wants to be the one that loses it, nobody wants to be the team that doesn't meet the standard, but if the standard is winning everything, that's a ridiculous standard. We prefer to focus our standards on the way we conduct ourselves, the way we approach our training, the way we interact with our teammates and coaches, and if winning accompanies that, great!"

Taking second behind Williams in both the V8 race and the team standings was Bates, who have had a little recent success at NCAAs, but nothing like today. The old rowing adage about silver medallists looking the happiest could have been about the Bates team; those kids looked really happy on the awards platform today.

"The theme of this year was 'Recess'," said Bates coach Peter Steenstra. "Just like 'playground.' Going to practice was something they were to look forward to every single day. That was our theme this fall, and the kids themselves carried it through to the spring. It worked out well, the kids stayed positive, and it was just training and enjoying the training that got us here. With our Head of the Charles results, we knew that we'd at least have some of the parts we'd need to challenge Williams this spring. I can't really say that the goal of the year was to beat Williams, but we certainly wanted to be in this Grand Final and we wanted to be challenging Williams."

Understatement of the day from the reporting boat at the start: "There's a lot of tension here." Tension wasn't even a word to describe the V8 semis today, with an crab/lost oar and full bailout in the Clemson crew that forced the rescheduling of semi #1, then a false start in a delayed semi #2, whew.

Maybe it takes just the right amount of pressure to achieve certain results, but the Cal V8 seemed unfazed by the various calamities unfolding around them and spun out the fastest time ever recorded at the women's NCAA Champs, winning their semi in a blistering 6:12.87. Open water behind them, Princeton and Yale engaged in an old-fashioned EAWRC beatdown, with Princeton, who are having themselves a nice regatta in the V8, finishing second to Cal, about 3 seats up on Yale.

The next semi, which would have been the first semi, regrouped after the Clemson rower was rejoined with her crewmates, and went off a good 30 minutes late. UVa, who also seem primed for a top finish at this point, rowed a classic pursuers race, shadowing top seed Stanford for about 1700 meters before cranking it up and taking the win by just 6/100s.

Rowing behind these crews was Brown, about a length of open back, taking the last spot in the V8 Grand. Several observers have remarked on Brown's racing style at this regatta, perhaps most aptly described as "Yippeeeeee!" The Brown crews blaze off the start and settle into a high, light cadence around 38-39 strokes per minute, easily 2-3 beats above the crews around them, and then when you wonder if they have room to crank it up, they do.

These semis are definitely not for the timid, as race announcers were calling several crews in the low 40s inside the last 300 meters or so, although it also worked the other way: the announcers called Cal at "a long 34" at one point deep in their record-setting row, whew.

The 2Vs were a little more cut and dried; the first semi saw a great race between Yale and Ohio State for the final qualifying spot behind Brown and UVA before OSU caught a heart-breaking (and fully boatstopping) crab with just under 500 to go; Brown was ahead of UVa slightly, and Yale was able to ease off slightly after Ohio State's mishap; these three crews advance

The second semi saw Pac-10 rivals Stanford, Washington and Cal all finish within 6 seats of each other, with Cal in third only 2 seats ahead of a pressing Princeton crew.

The fours semis, run last in the morning, held the intrigue of determining which teams would remain in the running for the team titles. You also saw fours from teams who'd had a run of bad luck in the eights rowing furiously to perhaps snatch back some pride for their teams; Clemson and Wisconsin won their respective semis and in so doing clinched their programs only Grand Final slots. Finishing behind those crews were Yale and Virginia (behind Clemson) and Cal and Stanford (behind Wisconsin); those four teams have all three crews in the finals.

Brown's V4 failed to qualify for the Grand after struggles with an injury and substitution here in Camden over the heats and reps, virtually ending Brown's two-year streak as NCAA team champs.

The final morning races before the DIII medal races were the DII reps; Philadelphia University, practically enjoying a home race, won the V8 rep just ahead of long distance travellers Seattle Pacific; these two crews will join Mercyhurst and Western Washington in the D2 Grand. The Western Washington and Mercyhurst V4s went 1-2 in their rep to claim spots in the Final tomorrow.

The final racing entertainment in the early afternoon was a wave of spare pairs racing in lumpy tailwind condition; folks took this seriously, with the grandstand full, cheering, and a few coaches dutifully picking up their results printouts at the finish line trailer, good stuff.

As the area quieted down, the grandstands emptied out save for a few stalwarts who stuck around to watch crews practice; where all the cheering earlier had been for teams ("Go Williams!"), individuals in crews headed out to practice were getting the shoutouts now ("Go Julie!").

On to the Finals! 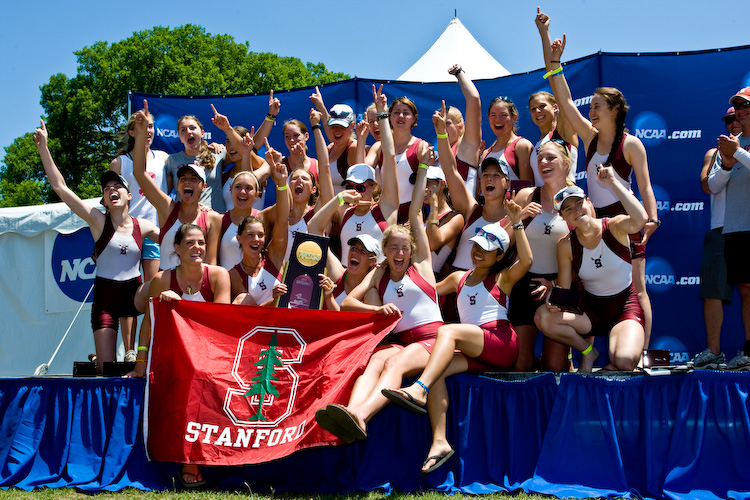 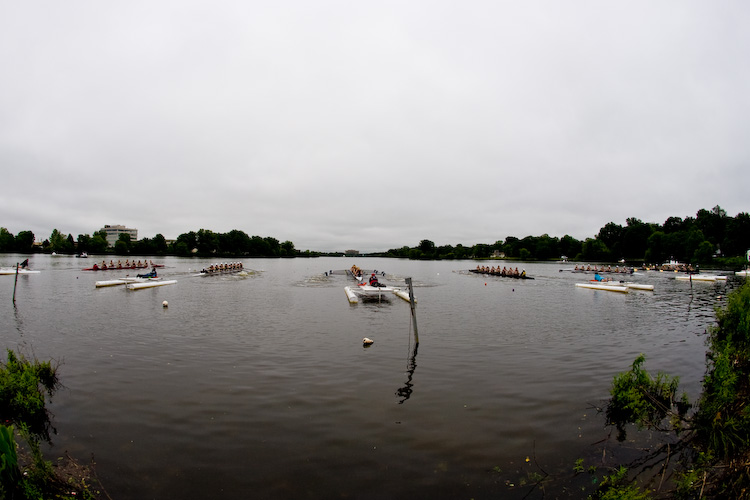 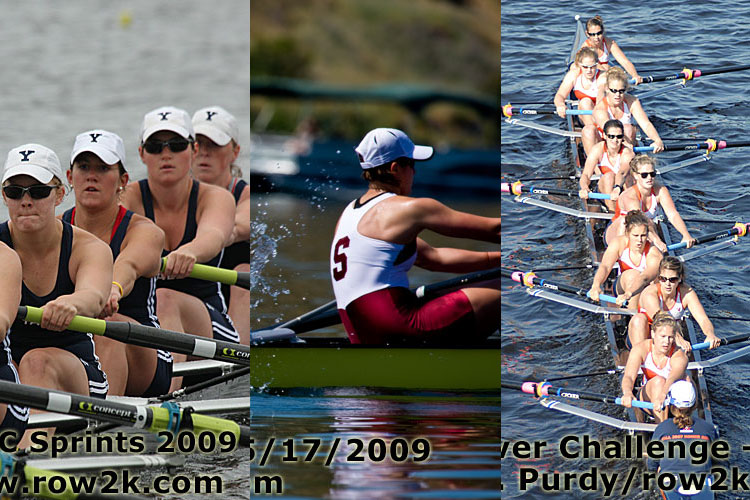 Too Close to Call 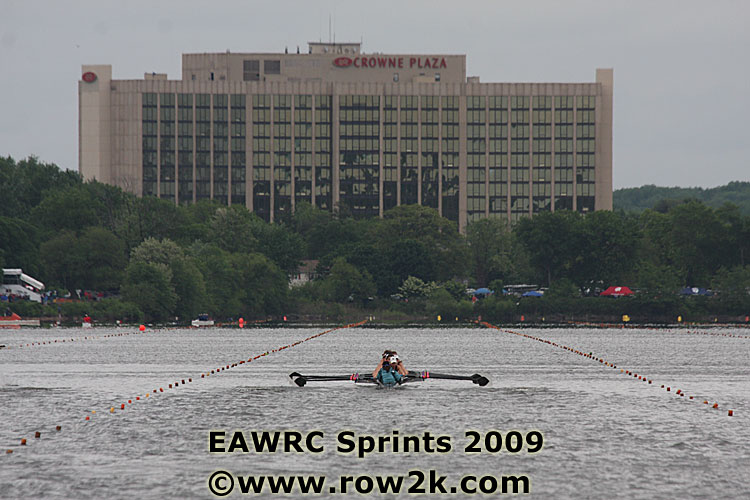