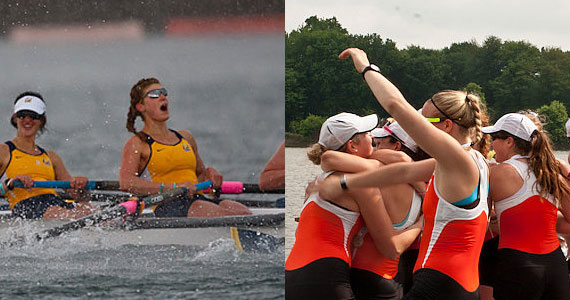 Heading into the 2011 NCAA Championships, the lack of a single, definitive favorite in the DI Varsity Eight adds a healthy dose of intrigue to the proceedings. The Princeton V8 is the only undefeated team remaining in the mix; the Tigers have been dominant on the east coast and rightfully snared the bulk of first place votes in the final polls just ahead of the Bears of Cal.

Arguably, the power rankings on the east coast have been more transparent than those on the west coast; Princeton won the Eastern Sprints by a touch of open water, while Cal has had to claw their way to the top of the western pile by beating crews they’d lost to earlier in the year. At the San Diego Crew Classic on April 2nd, the Bears still trailed surprise winners USC and Stanford, but by the PAC-10 Championships on May 15th, Cal had found enough speed to win it, with both Cal and 2nd place Stanford leaving 3rd place USC, who looked to be in world-beating form early in the season, well back.

Princeton and Cal are a great match at the top; confident Princeton vs. a fully battle-tested Cal looks to be the tale of the regatta heading into the racing.

Behind these two crews it’s really wide open, and it’s probably safe to say that Cal and Princeton have seen enough during their seasons up to this point to not take any of these teams lightly. Reading down the last CRCA Collegiate poll, Virginia is in the (perhaps a somewhat surprising) #3 spot; the Cavs have raced the toughest regular season schedule of any team in the top 10, and have seen all of the teams comprising the top 5, racing Cal and Stanford on a west coast swing early in the year (both losses), racing USC at home mid-season (loss) and finishing out their regular season with a 12-second defeat at the hands of Princeton before taking top honors at the Oak Ridge Invitational, the newly-formed southern championship regatta that has taken the place of the now-defunct South-Central Sprints.

Stanford at #4 is the enigma in the field; boasting what is probably the most physically talented outfit at the championships the Cardinal seems to have yet to fully break through. Solid regular season wins over Virginia and Cal contrast with losses to USC (at Crew Classic) and Cal (at PAC-10s), the latter by less than one second. The NCAA at Natoma may yet see an awakening: in 2009, during their V8/team championship season, Stanford got the NCAA regatta just right, winning when it counted, and may be poised to do so again this year.

USC at #5 seemed to have all of the pieces of the puzzle early in the year, mowing down a crop of PAC-10 opponents including Stanford and Cal on Mission Bay to win the Crew Classic, as well as a solid win over Virginia on their east coast swing later in the season. At the PAC-10 championships the Trojans looked surprisingly mortal, finishing a half length of open water adrift of the winners from Cal. To be fair, the PAC-10 WV8 final was more than a test of rowing ability; wind, rain, lightning and biblical conditions all around made the going tougher than it would have been, even under the normal intense racing circumstances.

Other crews to look out for in the DI field are Brown, always very strong as a team, Dartmouth, earning a return to the NCAAs with a very strong showing at the EAWRC sprints, defending V8 champs Yale (albeit defending their 2010 crown with a new and much younger team), Big-10 champs and Midwestern banner carriers Michigan State and Ohio State.