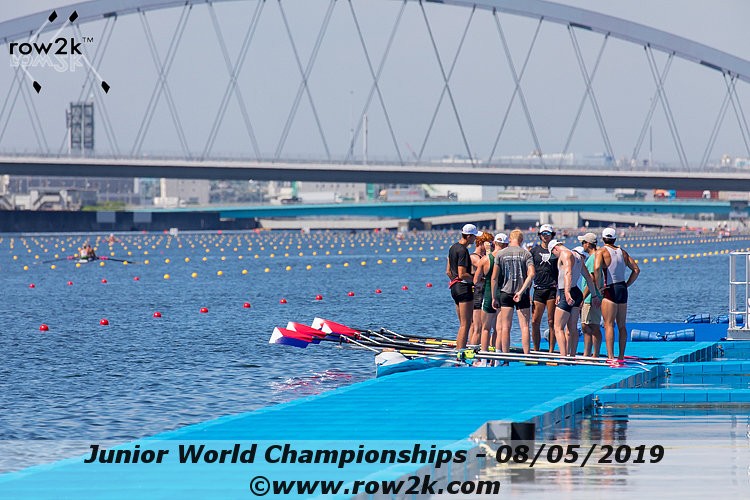 USRowing is pleased to announce the 2021 Under 19 National Team coaching staff, which will lead the team that will represent the United States at the 2021 World Rowing Junior Championships this August in Plovdiv, Bulgaria.

Under the overall direction of USRowing Junior National Team System Head Coach Casey Galvanek, Eric Gehrke will take over as men's lead coach for the under 19 program, while Caitlin McClain will serve as the women's lead coach. Supporting Gehrke on the men's side will be boat coaches Bill Manning, Steve McCarthy and Andrew Hess, while Gordon Getsinger, Mike Wallin and Asiya Mahmud will work with McClain as the women's boat coaches.

"We are very excited to welcome this new staff and get to work," said Chris Chase, USRowing's Director of Youth Rowing. "Each of these great individuals brings a unique skill-set and personality to the coaching staff. As we implement some significant changes to our Junior National Team System, we are confident that each of these coaches will positively impact the experiences of our athletes."

The rest of the USRowing Junior National Team System coaches, including the High Performance, CanAmMex, and Olympic Development Program (ODP) staffs, will be announced over the next few weeks. Eric Gehrke takes over as men's lead coach after working within the junior national team system for more than a decade. He brings a wide array of experience as a development, high performance, worlds' development team, Olympic Development Program (ODP), Youth Regional Challenge and CanAmMex coach across both genders.

Caitlin McClain, Women's Lead Coach
Caitlin McClain takes on the role of women's lead coach, having previously worked with the high performance, CanAmMex and world championships' squads. She has vast experience coaching both sweep and sculling boats as part of the USRowing system, as well as at Holy Names Academy in Seattle. From 2008-2020, McClain led Holy Names to unprecedented success – earning 10 medals at the USRowing Youth National Championshipss including two gold medals in the pair and the lightweight four with coxswain, as well as two bronze medals in the eight. She coached three rowers and two coxswains who went on to make World Rowing Junior Championships squads. This past August, McClain was named head women's coach at Seattle Pacific University.

McClain recognizes the value of a formative and rewarding competitive experience and will strive to create that for each of her athletes. She is a champion of collaborative leadership and is excited to work with the entire staff in the pursuit of coaching the U19 boats to the best finish in USRowing history. Gordon Getsinger, Women's Boat Coach
Gordon Getsinger began rowing in 2001 for The Salisbury School in Connecticut. He went on to row for four years at the University of California, Berkeley, from 2004-2008. In 2010, Getsinger began coaching as Saugatuck Rowing Club's boy's novice coach. He now serves as the Saugatuck girls' varsity head coach and director of rowing. Getsinger became the Saugatuck girls' first assistant coach in 2014 and took over as the head coach in the summer of 2015. Since he joined Saugatuck's staff, the girls' team has won five Head of the Charles titles and five USRowing Youth National Championships titles in the eight.

Prior to coaching in New York, Hess spent years coaching with the Cincinnati Juniors and at Community Rowing Inc., where his crews achieved multiple medals at the Youth National Championships including a gold medal in the men's lightweight four with coxswain. During his career, Hess has assisted in coaching boats that have gone on to the under 23 and senior world championships, most recently working with 2019 World Rowing Under 23 Championships lightweight single sculls gold medalist Sam Melvin. Asiya Mahmud, Women's Boat Coach
Asiya Mahmud is the associate head rowing coach at Drexel University and a USRowing Level 3 High Performance certified coach. Mahmud has been coaching for the last nine years, seven at the Division I collegiate level, with the goal of bringing access and opportunity to young women who aspire to row at the highest of levels.

During her tenure at Drexel, Mahmud coached the Dragon's women's varsity eight to the program's first-ever victory at the CAA Conference Championship and led the women's team to the overall point trophy at the Dad Vail Championship Regatta. Mahmud recently graduated from the Thomas R. Kline School of Law, with a master's oflegal studies and a concentration in NCAA compliance and sports law.

Bill Manning, Men's Boat Coach
Bill Manning has been a long-time, successful international coach for USRowing at all levels. In 2019, he coached the U23 lightweight men's quadruple sculls to a fourth-place finish at the World Rowing Under 23 Championships, and in 2018, he served as head coach for the U.S. at the Youth Olympic Games, with responsibility for the men's single sculls and the women's pair. He also coached with the Under 19 women's team, winning two bronze medals at the world championships. At the senior level, Manning served as an assistant coach at the 2004 Olympic Games, has coached boats at multiple world championships, and coached multiple medal-winning boats at the 2015 Pan American Games.

During the academic year, Manning serves as the women's assistant coach and recruiting coordinator at Princeton University. Prior to assuming that role, he coached the Princeton lightweight men for six seasons. Before joining Princeton, Manning served as associate head coach at Harvard University under legendary coach Harry Parker. Mike Wallin, Women's Boat Coach
Mike Wallin comes to the Under 19 National Team staff by way of Chicago, where he serves as the head coach of the Chicago Rowing Foundation. As a junior rower, Wallin attended St. Joseph's Prep in Philadelphia, where he was a member of back-to-back varsity eight national championship crews and made the 1998 Under 19 National Team. Wallin went on to win four consecutive IRA national titles under Steve Gladstone at the University of California, Berkeley. During his 15-year tenure as head coach, Chicago Rowing Foundation has won 40 Midwest Regional Championships in the eights, fours, and pairs. His varsity women's eight has reached the final at six consecutive USRowing Youth Regional Championships, earning a bronze medal in 2018 and a virtual gold in 2020. Wallin also has coached the Midwest Junior Men's Olympic Development Camp in the summers of 2018 and 2019. In 2019, his first and second men's eights brought home dominant victories at the inaugural America's Youth Cup in Sarasota, Fla.