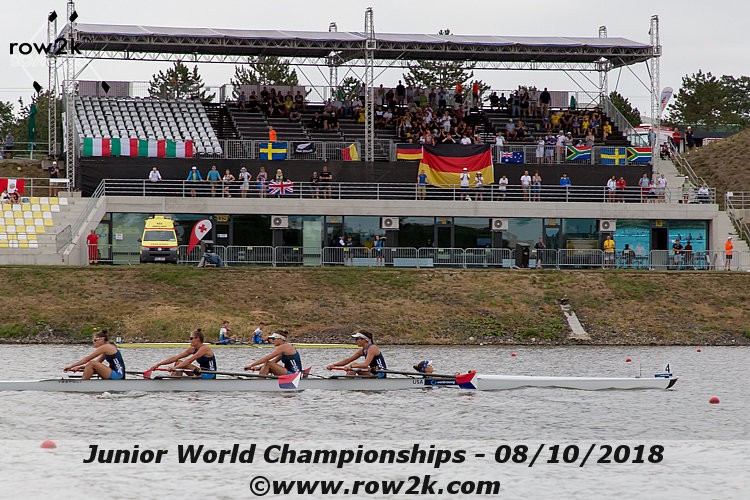 USA W4+ rowing to win in rep (and record time)

After watching the heats, if anyone thought that any events were locked up, the subsequent racing in the quarterfinals and even reps today put that notion to lie. Consider, for example, the new world record in the men's single set by Moritz Wolff of Germany today, which broke Clark Dean's one-day old world record by two seconds – Dean having broken the 14-year-old previous record by five seconds. To see a decade and a half old WR fall twice in two days, and by pretty big patches of water, just proves the notion that anything can happen at a junior world championships.

Or ponder that another record was set by the United States in the women's coxed four rep, and it was an impressive row, but knowing that the brand new event itself is only two days old does offer some perspective on that one. Nonetheless, having the fastest time of the week so far come out of the reps doesn't hurt the theory that everything is still up for grabs.

Finally, a third world record was set by the host nation, the Czech Republic, in the women's eight in a preliminary "race for lanes," of all things. The Czech crew came in seven seconds under the old world record, and the US crew that placed second beat the old record by five seconds.

Just for good measure, in the men's pair, the defending world champ Croatian twins who are rowing together again this year in the men's pair went through the reps. So yeah, the weekend could be interesting.

Of Dean's row today, coach Casey Galvanek said "Clark has a tough row ahead of himself in the semi-finals. His execution of today's quarterfinal was one of his best, and he will need to up his game if he wants to have a voice in the A final."

Dean may also be rowing through illness at the moment, according to the USRowing report. 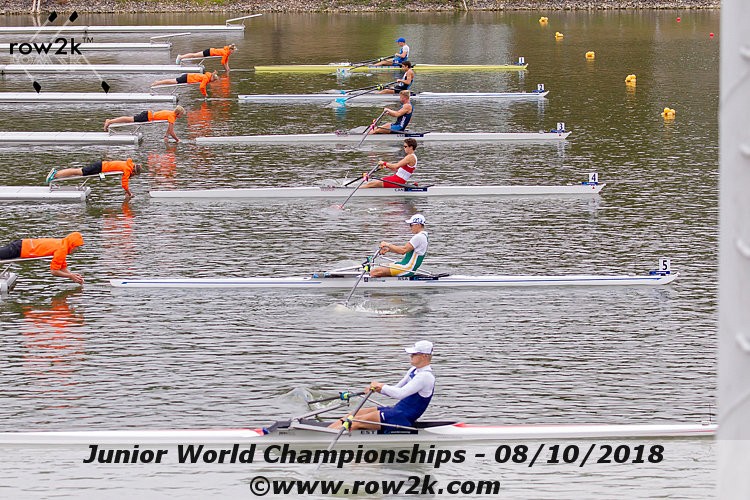 US women's coxed four coach Bill Manning noted that the four has focused on constant improvement this summer, and that they "felt their first race would expose some initial shortcomings, and it did," he said. "The test was going to be whether the crew could improve upon their first performance in today’s race, which they did do. The challenge now is to continue improving over the next two days so as to have our best race, not necessarily a perfect race, on Sunday in the A Final. Our best race will yield a good outcome."

In the US women's eight, coach Brian Ebke felt that the crew did a good job attacking their race in the prelim, which always has unclear stakes and hazy tactics.

"Overall we felt it was a solid race," Ebke said. "It took us a bit to get into a rhythm, but they did a good job of staying together as a crew and working well within the boat.

"As far as the unclear stakes go, we really focused on using this as an opportunity to learn and find areas for small improvements," he said. "It's helpful to get a full 2k in and look at strengths and weaknesses and where we can make positive changes. Most people don't get many chances to go to the starting line at the international level, so we thought it was important to make the most of the opportunity and take advantage of the chance to race against the best in the world. It's also always fun to go out and race your best no matter the stakes!" 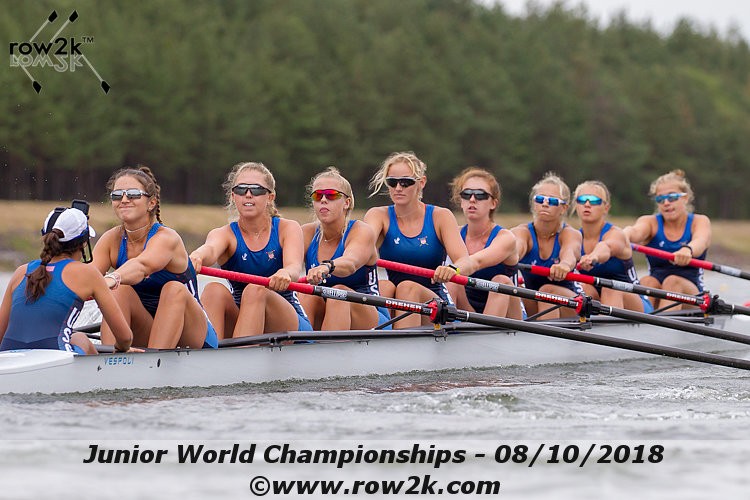 After falling to the 2017 gold and silver medalists in the heats, the US junior men's four uncorked a solid race, placing clear water ahead of a tight field behind them while posting the fastest time in the reps. They head to a semi tomorrow; coach Nick D'Antoni did seem to welcome the opportunity to get another race in.

"I'm really proud of the boys' effort today and the adjustments they were able to make in the last 24 hours," he said. "It's been quite a long time since any of our guys have raced and it may sound trite, but the learning curve at the world championships is particularly steep, so there isn't a lot of time to adapt. Fortunately the rep does provide an opportunity to put into practice the lessons learned in the first round of racing, which they did successfully today, and I think they can build on that experience tomorrow. All the competition is tough but I'm pleased with our draw for the semi and look forward to seeing the boys race for a place in the A-final." 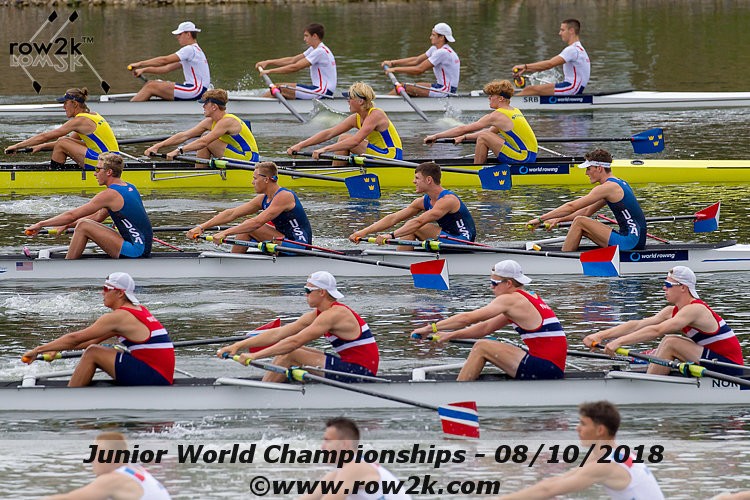 After leading for over 1000 meters yesterday and then struggling late to fall in to third and out of direct advancement from the heats, the US men's eight took the win today by holding off a late charge by Hungary.

"The athletes took a very mature approach to what was a disappointing performance in the heat and executed a much more complete race today," coach Jesse Foglia said. "We have our work cut out for us in the final, and look forward to seeing if they can be as relaxed and confident in prime time."

The US men's quad had a similar experience with a row through the rep perhaps offering a useful or even necessary chance to tighten up their racing approach.

"These guys learned a lot from the heats the other day," Casey Galvanek said. "We tried to actually execute what was needed to qualify; with the pressure of only two boats moving on yet again, they needed to manage the competition better, and they did. Hopefully, we can carry what we learned, today, into the semi-finals tomorrow." 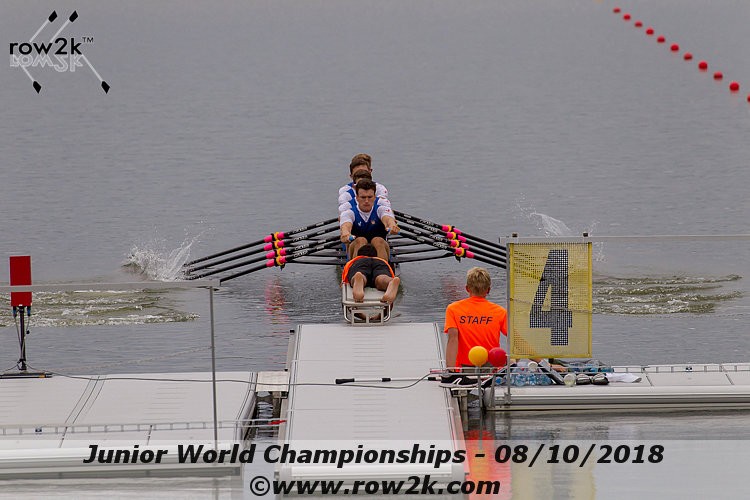 The women's quad also heads to the A/B semis after placing second in their rep today.

"It was a solid rep," coach Jamie Whalen said. "The crew rowed with much more confidence today; they were loose but focused before the race, had a good warm up and start, and early on went with Canada to separate themselves from the rest of the field to secure one of the three qualifying spots for the A/B semifinals." 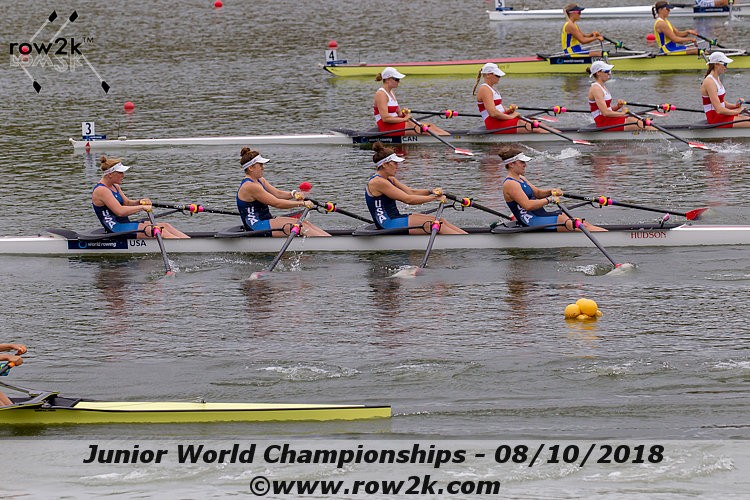 Notes from the Course
-When the Czech women's 4+ qualified today, the somewhat slight morning audience still managed something approaching a roar – which was nearly matched by the cheers from the US contingent when the WR was announced; we know it is a new event, but we say go with it.

-The weather maps showed considerable rain all around the area, and it was apparently pouring in Prague all day, but the course was subject only to one or two five-minute drizzles. That didn't stop folks in the cheap seats from running to the top of the grandstands for cover, though.

-And by cheap seats, we mean free; the covered grandstand (with the gargantuan German flag) was sold out some time ago, entry everywhere else is free, including the only semi-covered grandstand that is right at the finish line. Not bad.

-The starting line is watching you. 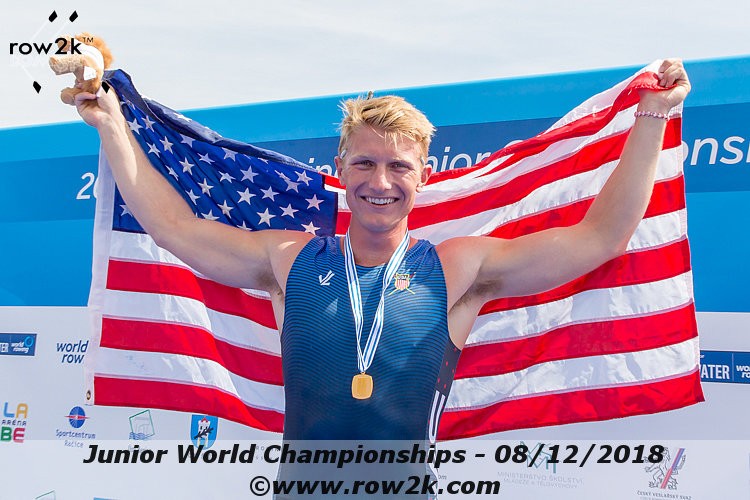 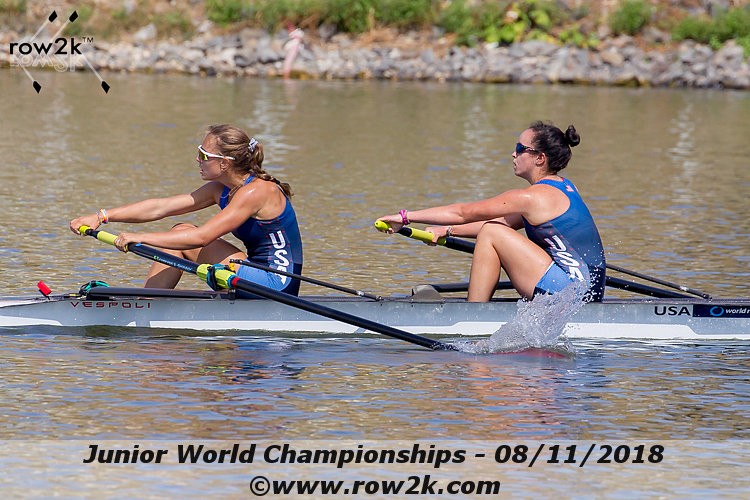 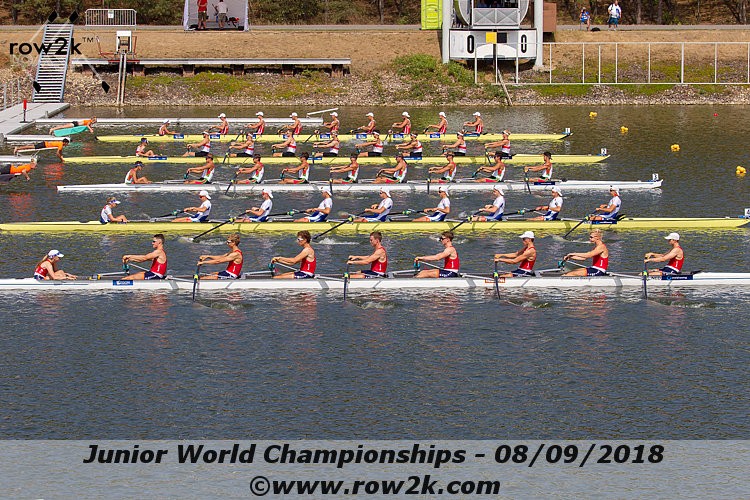 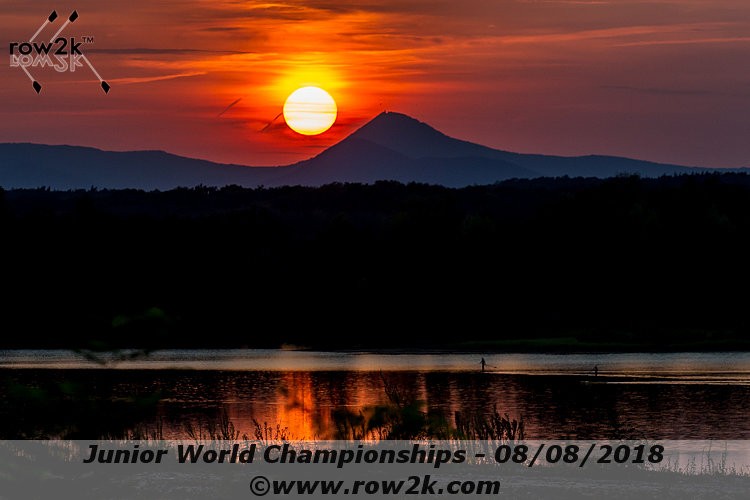