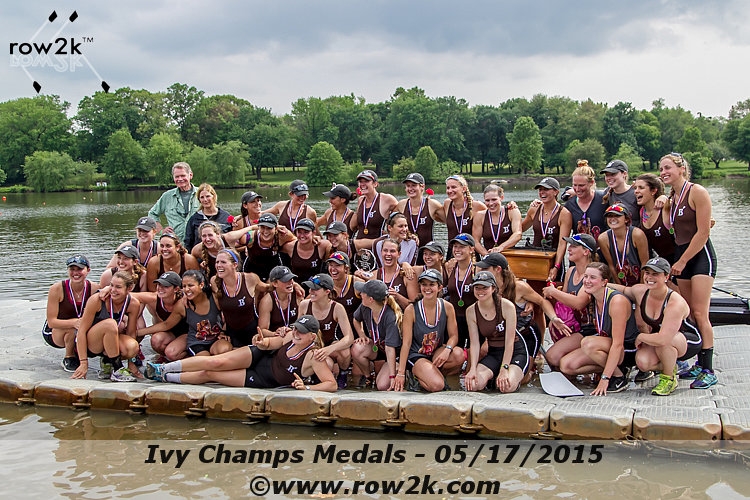 2015 at the Ivy League Championship was Brown's year, definitively. Not only did the Bruno Bears sweep the NCAA events (Varsity 4, 2V8, V8) at the regatta, they added the Varsity Four B final to show their depth going into next year. That makes four wins in a six-event regatta, which if nothing else, makes interviewing for the race report less about chasing down coaches and more about getting information from a coach (John Murphy) that has a fairly simple and no-nonsense approach to rowing.

That approach is making fast crews though for sure when you consider the fact that both the 1v and 2V won their grand finals by open water.

"I feel very fortunate," says Brown head coach Murphy, who coaches with his wife Phoebe in Providence. "I do all the basic things that other coaches do… it's not very unique. It's just hard work - like anyone who has been on this dock over the years, it's just hard work."

About what motivates his athletes to be better, and how they come up with race plans, Murphy explains, "I think it is always a little different with each group of athlete—they are all motivated differently, and we have such great competition here. Every week we race, the competition brings out the best in the athletes."

Sunday afternoon at Cooper River Park was warm and overcast to start the day, and despite a truly torrential 5-minute downpour, the conditions were excellent for racing, with flat and calm water. The first race of finals was the 3V Eight.

In many cases, this race is really about the future of the respective programs. For Yale, it was that desire to strengthen a program that put the Bulldogs ahead of other crews Sunday.

"They embraced their role as the foundation of Yale Women's Crew and their responsibility to push the speed from under all the way to the top," said Yale assistant coach Sarah Trowbridge. "As a very fast starting crew I think they were able to push the rest of the team and really engage in fun competition during practice back on our home course."

"The boat is a very light, athletic crew who rowed very long and aggressive all the way down the course—definitely one of the most coachable crews," she adds. Not only were they coachable, they set a course record in the 3V at 6:29.23—a full 4.5 seconds ahead of Brown.

"The 3V8 was one of the 'most-fun' boats to coach because no matter how the line-up was shuffled they kept an internal fire alive," concluded Trowbridge.

Next race down the still water was the Varsity C Four. This is another one of those boats where you really don't know who could be occupying the seats. Rowers from different stages of their academic and athletic careers are in these fours, and some were in fourth varsity eights just a couple weeks ago, and the result of the race really an indicator of how the coaches of the program move athletes to where they can be most effective and prepare. For Princeton on Sunday, this boat found a way to be effective, earning the Tigers their only gold, doing so in a convincing manner, winning over Radcliff by 10 seconds in a time of 7.31.83.

"With the 3V and the C and D fours we had mostly freshman and sophomores in the boat, so the main goal of the season is to get them prepared for roles vacated by some pretty impressive seniors," says Steve Coppola of Princeton. "I think the freshman showed the fortitude to stick to their race plan and come from behind to get into the medals in the 3V was great. And with the fours, it was just important to go through the experience of the Ivy League Champs to see how they go about business in a championship environment. I think the take-home was that they saw how they worked and what it got them. The whole league is getting faster, so being comfortable in those tight race situations will be important."

For there out, the remaining races were Brown's. The Varsity B Four was on the water when the downpour—the only of the day—soaked athletes, coaches and spectators. Their win over Princeton by three seconds may have surprised top-seeded Yale (who finished fourth behind Radcliffe) the most.

The first NCAA Boat on the water , the Varsity A Four was similarly won by Brown Bears in a sprint that pushed their bow past Yale Bulldogs in the final meters to win by 1.3 seconds. The rowers really emptied their tanks on this one. The temperature had cooled a bit from the rain, dropping from 82 to mid-70's, but the exertion and close margin brought the pain—you could see it at the finish line.

The 2V Eights was, perhaps more than any other race on the dya, a demonstration of the Bear's dominance of Ivies. Their win by about five seconds over Radcliffe and nearly seven seconds over Yale showed clearly the depth of the current program, and the drive and determination in that boathouse in Providence on the Seekonk River. BY 1000 meters the Bears had separated by at least half a boat length, opening it up to a full length by 1500 and never backing off through the 2000 meters. They may not be able to expect that kind of margin when they get to NCAA's (well, maybe they can), but the kind of confidence a win like that produces can carry a crew into the next contest.

Four of the Varsity Eights were together at the 500 meters: Brown, Princeton, Yale and Harvard. As the crews rolled into the 1000 meters, Brown and Princeton had separated from Yale and Harvard. Brown stayed consistently in the front, but at 1500 meters, Yale and Princeton switched places when Yale turned on the body of the race piece. In the final 500 meters, the crews, charging in at a high rating of 38-39 and building, stayed in that order: Brown, Yale, Princeton, Harvard. Brown finished 6:15.421, just .009 seconds behind Princeton's scorching record from the 2014 event. This fourth Ivy League Championship was in the books, with Brown winning the team trophy as well, with 87 points, followed by Yale with 72, then Princeton with 69.

The athletes at the Ivy Leagues, most of whom have just finished their semester, now have a couple weeks before heading out to California for NCAA championships.

"We are going to analyze what we need to do," Murphy said looking ahead. "It is going to be brutal out there, they have just finished exams and we have to balance rest and work."

Racing fans will see some of these crews again at the NCAAs May 29-31st in Sacramento, CA; the official selections come out at 5pm on May 19. See the breakdown on automatic qualifiers on row2k from the weekend here. 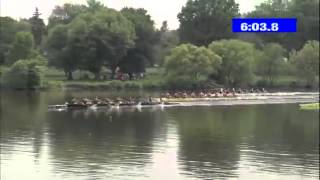