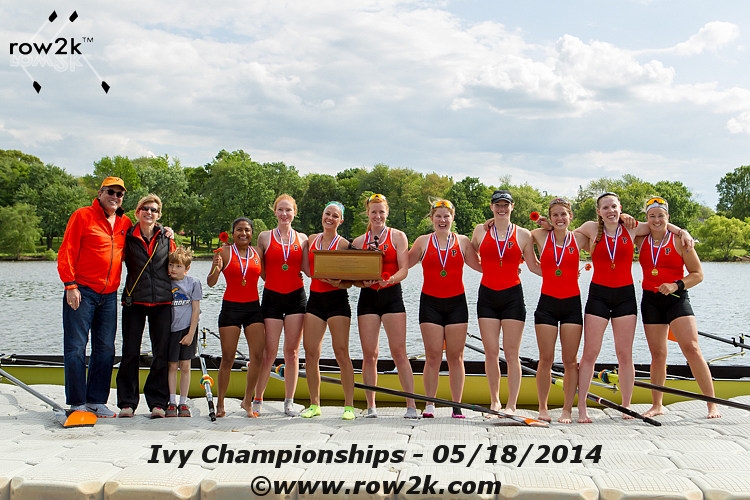 It took a record-setting effort to do it, but the Princeton varsity eight seized the Varsity 8 championship along with the Ivy NCAA bid with an open water win in the last race of the day on the Cooper River on Sunday. Throughout the day, the top of the medal stands were mostly dominated by Princeton and Brown, with an Ivy record row in the Varsity eight leading the way for the Tigers, and dominant wins in the 2V8 and V4s combining with a silver in the V8 to earn the Bears the crown for both the overall regatta and the "NCAA events only" points categories.

Varsity Eight
The Princeton crew, which had come into the weekend ranked second to a Brown crew that had lost only one race all year (to Cal on a cross-country trip back in April), set the pace early and did not seem to falter on the way to an Ivy record 6:15.4 (including the past EAWRC championships that included the Ivy championship). After giving up a bit of water early, the Brown eight tagged onto the Princeton crew through the middle of the course, establishing themselves solidly in silver medal position, while Radcliffe blitzed up the course in the tailwind in the outside lane, defying their sixth seed for a bronze medal. Dartmouth followed in fourth, with Cornell in fifth and Yale in sixth.

Princeton's road to the Ivy Championship wasn't a clean one, however, starting with a loss to Brown on the first weekend of the season, and a loss to Virginia the following weekend. Princeton coach Lori Dauphiny said that some of the early lumps had helped the crew find their footing.

"I think it helped this year to have losses along the way, to figure out what needed to be done," Dauphiny said after the racing. "They had a really nice start this race; we had not been up at the start for most of the year, and we were ready for it to be a very tight pack out there. We also had some concerns with the winds, and they handled it well."

On the regatta record, Dauphiny noted that "this is their second record this year, one at home and this one today. I believed in them, I believed they could do something special, but I didn't know that they could pull off a record today."

Ivy rules say that the winner of the Varsity 8 gets the league's automatic bid for the NCAA Championship, so everyone else will have to wait for the Monday afternoon selection meeting, but Ivy fans would expect Brown iced themselves a spot, that Radcliffe's varsity bronze puts them in the running, and that Yale's two silver medals in the 2V and V4 may do the same; will have to wait and see.

Brown Team Trophy
The consistent and formidable depth of the Brown women's team is pretty much legendary at this point, but that doesn't mean it is easy to pull off, or any less impressive to witness. In fact, Brown coach Jon Murphy noted that it has been a few years since they have taken the team trophy at EAWRC/Ivy Championship – but with commanding open-water wins in the 2V8, V4, and V4B, Brown did it again this year in fine style.

"We were down a few years, but we have some people who are just incredible, I think, and they want to make things happen, and they got out there and went for it," Murphy said.

Brown has been ranked on top of the weekly collegiate women's poll for most of the year, and although the team showed it is no fluke today, Murphy downplayed the importance of the poll.

"It's funny, I didn't pay much attention to the ranking, but it was nice, it was fun to have it," he said. "But I don't think anyone really pays any attention to it in the end, and we all know how quickly it can change! There was great competition for us in all the events, and I think this league is a really incredible league."

Second Varsity Eight
Of his second varsity's blast down the course, which reversed their second place ranking against Princeton, Murphy noted "that JV has really good spirit, they're just tough, and you know they hung in there when Princeton got out in front a little bit."

Egged on by a clamorous bicycle peloton Yale staged a fantastic sprint in the outside lane to win the silver, and Princeton hung in for bronze, followed by Radcliffe, Penn, and Dartmouth.

Varsity Fours
Brown had formidable success in the fours on the day, winning the A four by a generous patch of open water over Yale and Princeton in silver and bronze position, and the B four by a tiny patch of open over Princeton and Yale in silver and bronze position. Catherine Starr, who coaches the C four at Brown, credits the boathouse work ethic as the key to the success in the fours.

"This was a year of looking at it as a big picture, with everyone going as fast as they could in whatever lineup they were in, and that was their goal," Starr said. "The kids are really competitive, and when they practice together, it is just fierce; fierce and fun."

In the Varsity C four, Penn ran away from the field for a big open water victory over Dartmouth in silver and Harvard-Radcliffe in bronze positions.

"For the Penn women's development, this has been really positive," said Penn assistant coach Cass Cunningham after the race. "There are 16-20 women who are very young and all about the same level, just a good development group. We have one senior in the boat who walked on four years ago, and a coxswain who was a rower who changed to coxing. The rest are all freshmen, including the bow seat who was a walk-on. This is a platform for them to develop into next year; it is a really good way to start."

Third Varsity Eight
Princeton's 3V8 came into the championship undefeated and somewhat unchallenged in regular season Ivy competition, which can be hard to do, as really there is only one satisfying result for an undefeated crew. In the end, they proved to be as commanding at championships as during the season, posting an eight-second win over Brown in second, with Harvard-Radcliffe winning bronze.

"Throughout the year they have been racing with a kind of chip on their shoulders, and so have always pushed themselves," Princeton assistant coach Steve Coppola said. "We knew coming into the championship everyone had a bit of a layoff after their last races, and had time to find some speed, so they weren't assuming anything. We had no idea what might get thrown at us, so tried to be prepared for anything. It helps to race other crews in our boathouse; racing our lightweights, racing our 2V, racing the 4V, and it was great to see them go."

Fourth Varsity Eight
Princeton won the two-boat race in which only Princeton and Penn were entered; the event does hark back a bit to the early days of the EAWRC, and women's rowing in general, where as a young sport every effort was made to find a race for anyone who wanted to participate. Princeton took the gold in the event with a solid row.

"We only just were able to put that boat together," Coppola said. "Most of the season they raced as a second entry in the B four race, so it was pretty tough on them. When we finally put the eight together, we were really excited that Penn wanted to race it as well, and we felt that it was great for the development of our team. We have four seniors in there who really set a good example, and we had four novices rounding it out with a novice coxswain."

Penn was the only crew of the eight Ivies to enter a crew in every event; their 4V had six oarswomen who started rowing in September, and one more that started last year. The elimination of Novice events at most women's championships has left a dearth of options for newcomers to the sport, and it is great to see students can still walk on to rowing and get good coaching and racing, even seven events deep.