Northeastern meeting after advancing to the Grand Final

In the moments after Northeastern qualified their varsity eight to row in the IRA Championship Grand final Saturday, the crew and coaches huddled together in the boatyard, next to their still wet shell, arms around each other, talking with their heads down.

Outside the circle, others stayed a respectable distance. One or two people not in the group, but clearly somehow connected to the team, stood a comfortable distance away, either videoing the scene, or snapping a cell phone picture.

What the athletes and coaches were saying to each other appeared to be something they all deeply believed. When it ended, and the athletes headed to their ergs and stationary bikes for a cool down, head coach John Pojednic shared some of what was going on.

It was a bit of a David and Goliath message, was the way he explained it.

"We know that nobody except our team believed that we were going to go out and make the grand final today," Pojednic said. "Nobody in the world. Not our alumni. Not the other teams. Nobody. But we don't think about what other people think," he said.

There was more to what Pojednic was saying. He was talking about culture, the way a team conducts itself as a matter of course, what makes a team competitive, having a belief in committing to a plan, being willing to make sacrifices - just doing what is necessary to prepare to compete and then executing, that was what the team was talking about.

It was a moment that they had been building towards, and one they were reveling in. Making the grand final at the 2019 IRA Championship was a big deal, that was the message. This is a league of Goliaths, and Pojednic and his team had advanced in the final because they were willing to believe that they could not just row among them, but compete and advance to another day, and another chance to race.

Northeastern was one of the six teams of the field of 24 varsity eights that had made it to the top final. They were not one of the top seeded teams, but they prevailed, finished third in their semifinal Saturday behind Yale and California, and ahead of Brown - a team they had lost to two prior in Eastern Sprints.

They will race in the final Sunday against two-time defending IRA champion Yale, along with California, Washington, Harvard and Princeton.

How they got there Pojednic said, was by getting his team to tune out the nay-sayers and the expectations that most of the collegiate men's varsity scene believed they could not do.

There are continued expectations that Yale, Washington, Harvard, and Cal will finish somewhere in the medals Sunday morning, and that Yale is the favorite to win. 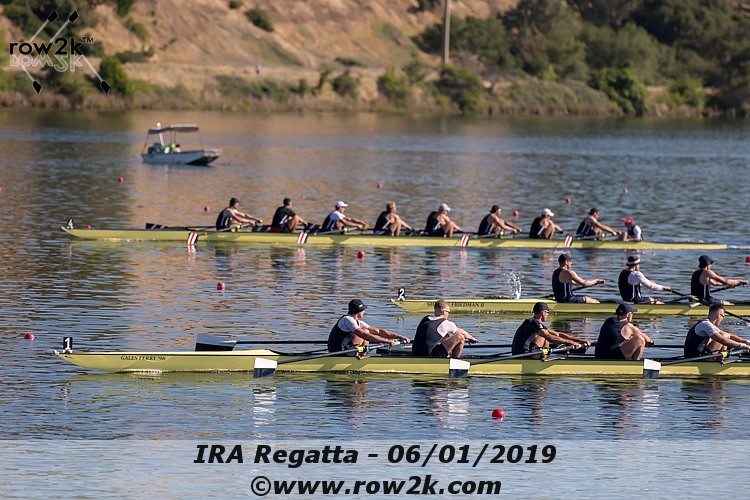 It has been four years since Northeastern rowed in the Grand Final. That came in 2015. They finished sixth. They have finished seventh the last three successive years. The last time Northeastern won the whole thing was 1991. The only other time they won in the 123-year history of the regatta was in 1988.

In the last 20 years, the names of the teams that have won were mostly Washington, California, Harvard, and the last two years, Yale. Wisconsin and Princeton were also among them, but only once each.

Goliaths among the Davids.

The reality of Sunday morning is that Northeastern will not likely add their name to the list again. They would need more than a sling and a stone, and a well-placed shot to the head to knock Yale, Washington or California off the podium.

That's not saying that cannot happen. That is just the reality of the situation. What Pojednic's squad did Saturday to beat Brown, and get into the final, was a big deal, and one that he and his athletes hope can help continue to build the culture he was talking about.

"In heavyweight men's racing, there is not a lot of mobility among the top," said freshman coxswain George Doty. "You see a lot of teams stuck in the same tiers. We've gotten seventh three years in a row, and I think for the team culture, just moving up and showing we can do better, showing that we can go out and compete with the likes of Harvard, Brown, Yale, and like that.

"After seeing the semi, and seeing we had Brown, we knew it was going to be really hard, we knew they were going to be a super-fast crew. But going out there and really controlling the race and doing exactly what we were talking about, was really meaningful, and it is a great stepping stone," he said.

"Being a freshman, I really wanted to change the culture here," Doty said. "We had three other freshmen in the boat, and we all came in and had a mission to put Northeastern back in the grand final, back where we belong."

Sunday morning, Northeastern and Princeton will race the four top seeds coming into the regatta - Yale, Washington, Harvard and California. And it will be a race well worth watching. Yale has not been defeated since the 2018 San Diego Crew Classic. Washington has dominated the Pac-12. Harvard has only a single loss this season, to Yale in the Eastern Sprints final, and California was second in the Pac-12 only to Washington. 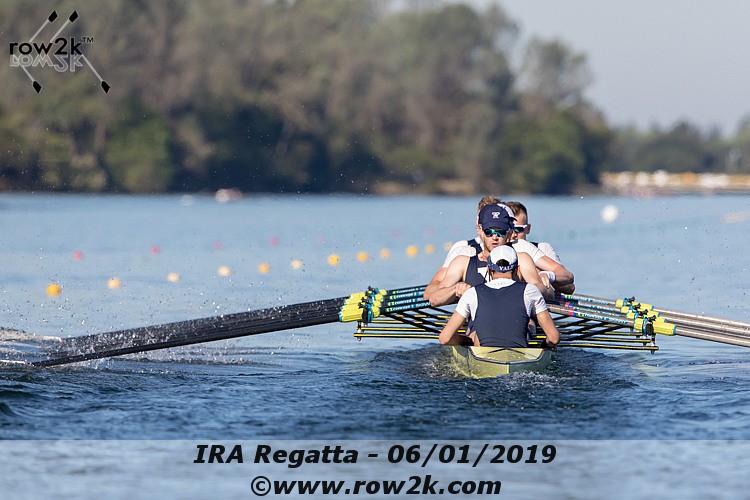 Yale will be the top seed in the Sunday final

Of those top teams, Yale is the consensus favorite and they are showing no signs of giving that away. They won their heat easily, and beat California in the semifinal. Washington is primed to challenge, and beat Harvard to the line ahead of Princeton on Saturday.

The Harvard loss to Yale in the Sprints final, is a race that has stayed with the team the past two weeks, and one they hope to erase.

Harvard coxswain George Cozens said Saturday that Harvard has been enjoying the racing. "It's exciting. It's a cool course and a nice place to row. We're having fun going fast. The racing has been intense, I'll tell you that much."

Asked what Harvard has been working on since the loss to Yale at Sprints he said, "We know where we got beat, so we've just focused on those areas so we don't get beaten there again. No point in doing the same thing twice, is there?"

Harvard freshman stroke Clark Dean said his crew is feeling good about the past two weeks, and the way they have raced here. "We're doing what we wanted to do, get in the final with not too much effort. That was the goal.

"So, I think we're all happy with where we are right now," he said. "After Sprints, we worked on a lot of our race plan to be more competitive with Yale. We have the same lineup in the same order, so as far as that goes, it's the same. But we're approaching the race differently, and I think we are going to be on the same page as all these other crews." 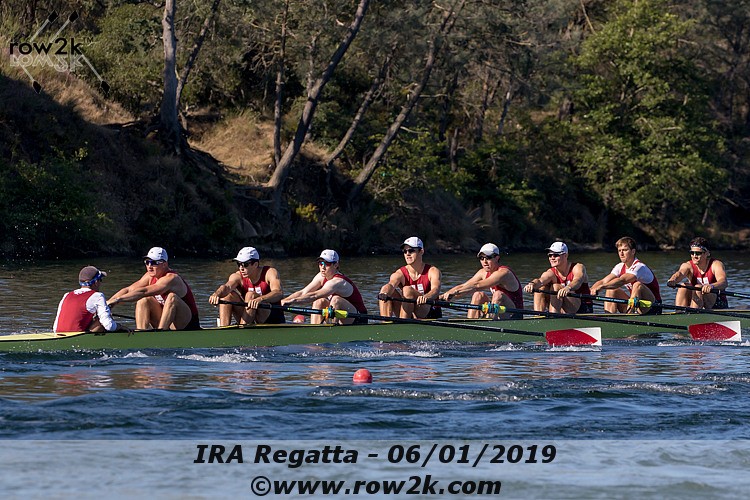 Harvard looks to challenge for a championship

After spending the first two days of the championship waiting for a chance to race, the lightweight women held their preliminary race for lanes Saturday and sorted out which teams would take the favored lanes.

Stanford and Princeton were the top seeds before the racing started Saturday morning, and when the varsity eights finished their row, they stayed in those positions. Stanford won the race for lanes and Princeton was second.

"I think it's a good start," said Stanford head coach Kate Bertko. "It looks like all the events are going to be pretty fast and we're excited to race tomorrow." This is the fifth year that Stanford will go to the line as the defending champions, but she is taking nothing for granted.

"Every year is a new adventure," she said. "Every year is a brand-new project, we have new folks and new problems to solve and it's very exciting. I think we will just keep doing the same stuff, blades in, legs down, ready to go." 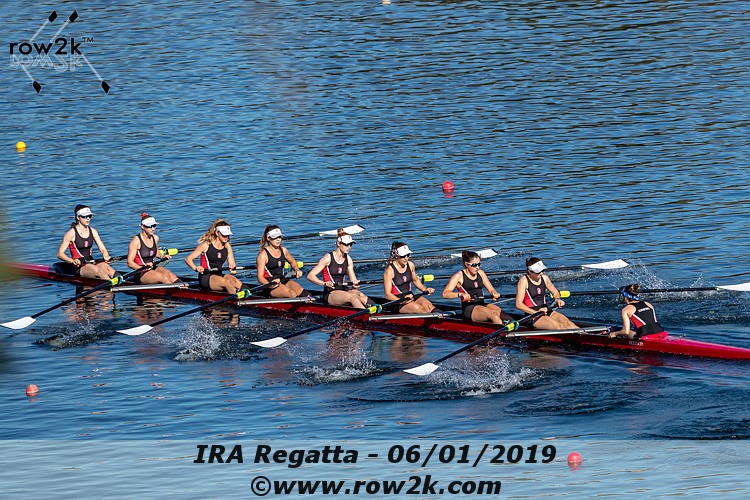 People who live out West are said to be generally friendlier than those who live in the East. It appears that the same applies to the ducks that live on Lake Natoma. One group of the water fowl have had no problem mixing with the rowers and are eager to be held. Rumor on the course is they were pets that had been released into the wild.

Speaking of birds, a vintage World War II B-17 that made a record 140 combat mission during the war while in service, including 18 bombing raids over Germany, dropping 562,000 pounds of bombs, made a few passes over the start line this morning.

Going for a swim. Being a stake boat holder can be hazardous. One volunteer fell in the water today, causing his life vest to inflate. He appeared to be uninjured.

Quiet Down. Several of the crews preparing to race on the line had to be reprimanded by the start referee. One particular Cal crew member has made a habit of yelling "FLAGS UP" when the crews were aligned. The tendency to become vocal apparently spread among the other crews during the first two days. That stopped Saturday when the call came down from the start tower, to knock it off.