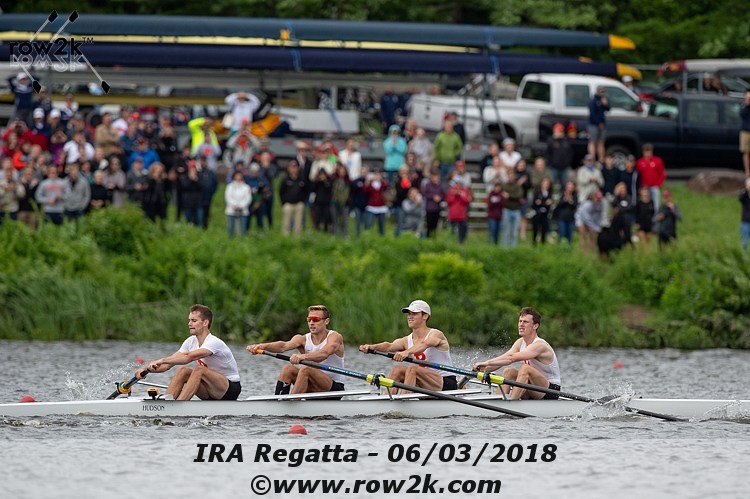 Princeton lightweight coach Marty Crotty was standing with Columbia coach Nich Lee Parker at the finish area on Mercer Lake just as the 2018 IRA Regatta was being blown dead.

A race schedule that had already been flipped to accommodate the top five grand finals for the men's and women's eights events in the championship regatta had run out of room for delay as the winds began whipping the already rain swollen lake into a frenzy, and a committee of race officials and referees made the call that it was not safe to continue

So, the remaining races were officially canceled at 10 AM.

Crotty and Parker were quick to move into a 'this can't be allowed to happen' mode, and they began cooking up a plan to move the remaining races over to Lake Carnegie and the Princeton University boathouse.

Within just under two-hours, a caravan of boat trailers, team busses, tents, food, parents, classmates, and two USRowing officials were over in Princeton and ready to go, and Crotty switched from concerned coach to regatta director.

The Princeton boathouse area was cleared of the tables that had been set up for an after-regatta party, and were replaced by boat slings, shells and oars while an army of volunteers were getting launches ready.

Meanwhile, a crowd estimated to be between 600 and 700 people began assembling at the finish line at the end of the lake. 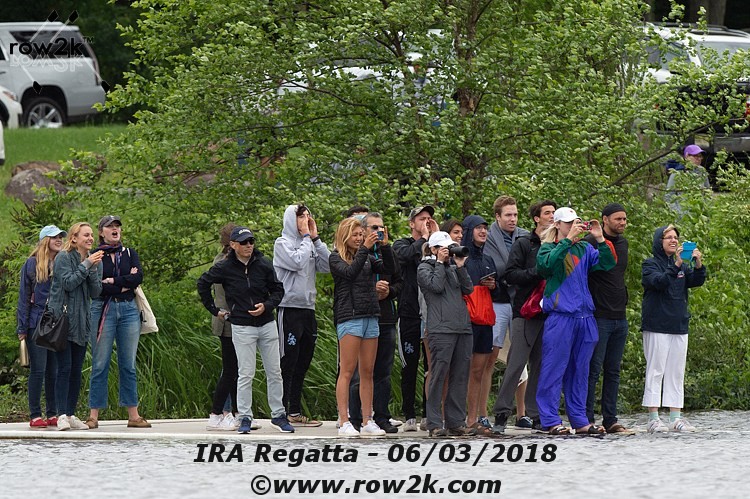 And the remaining lightweight events were saved.

According to Crotty, it didn't take long for the rest of the coaches and teams to jump in on the planning. The men's heavyweight fours were also canceled, but that event was not moved to Princeton because one team could not make it. 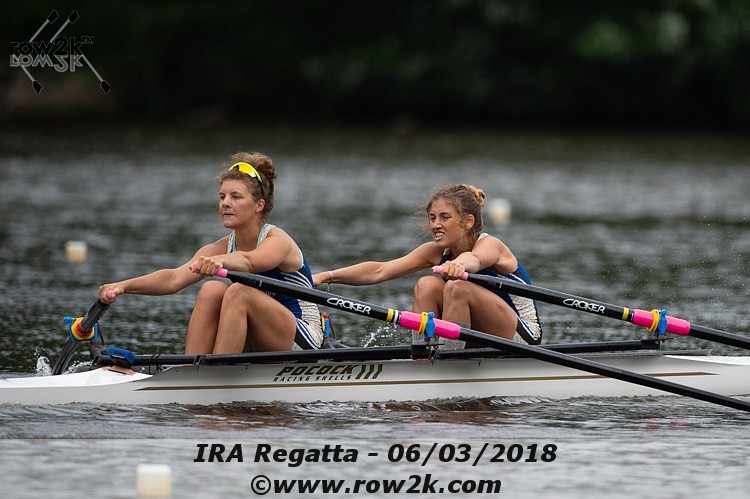 "After we got the word, we just put the wheels in motion and set a really aggressive schedule," Crotty said. "It's 10:15 now, can we all be over there by noon and rigged, and we'll have the races at 12:45?"

Everyone agreed, he said, and then the lightweight women's teams joined in. They had only one grand final completed in the morning, and had both the double and four grand final left.

"To their credit, they were doing the same thing in parallel, which really made this work," Crotty said. "They said they would be ready to go at 12:15 and 12:30. I said good for you, you can go right in front of us." 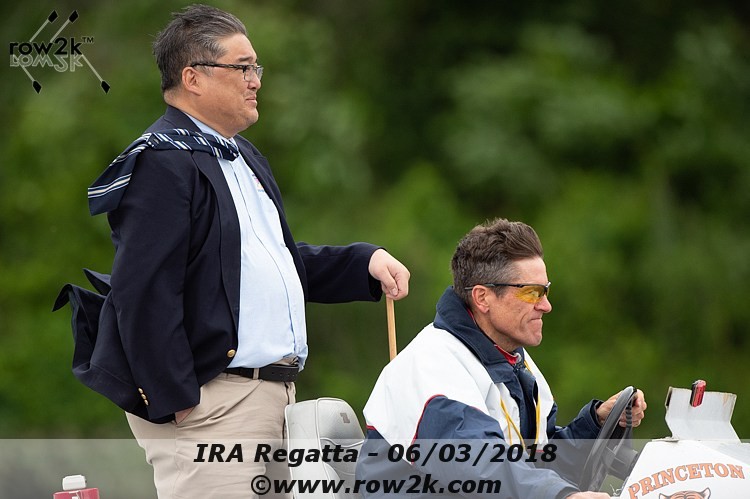 USRowing Referee Ron Chen, who was joined by Sam Chang to referee the racing

For rowing coaches and athletes, having weather end a regatta is not a new occurrence. And having an event canceled would not usually cause that kind of response.

Except when it is the IRA, Crotty said.

"The reason that the coaches were so cooperative is, we're very athlete-centric. It's all about these guys, especially with the IRA. Ninety-percent of those guys have been out of school for three weeks or more. You have to choose to participate in IRA training, especially because on the lightweight side of things, it's a different discipline," Crotty said.

"These guys have worked really hard rowing these fours, getting selected for these fours. I don't know how other guys do their IRA groups, but our guys had to make these fours. We had six seniors in those two fours, and they chose to be here for the last three weeks. I'm proud of them and I wanted to give them that one last race."

It was a sight to see, and above all, the athletes appreciated it.

"I was really excited to race this morning, and when I heard that racing was suspended at Mercer, I was really hoping that it would be resumed quickly," said Cornell junior Luke Sendelbach.

"I was a bit disappointed when it was cancelled, but ecstatic to be able throw down on Carnegie. Every rower is a racer, and that's what we came to do. Everyone here is thankful for the opportunity to line up, even on such short notice." 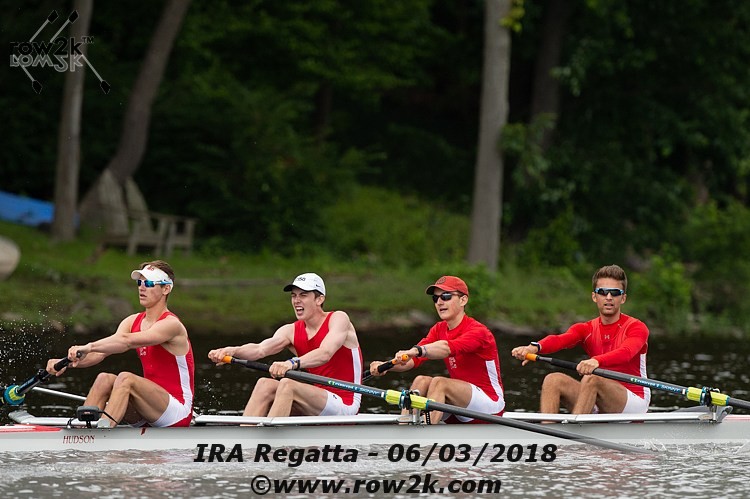 No medals, trophies, or points were awarded from the racing, as the event was not recognized or sanctioned by the IRA administration. 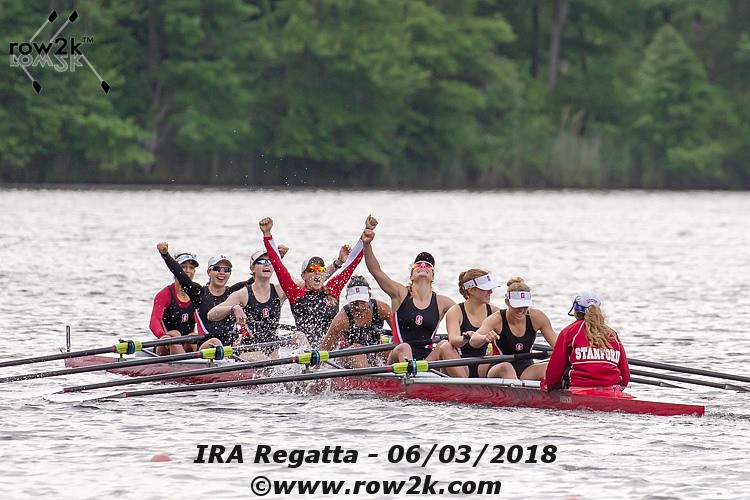 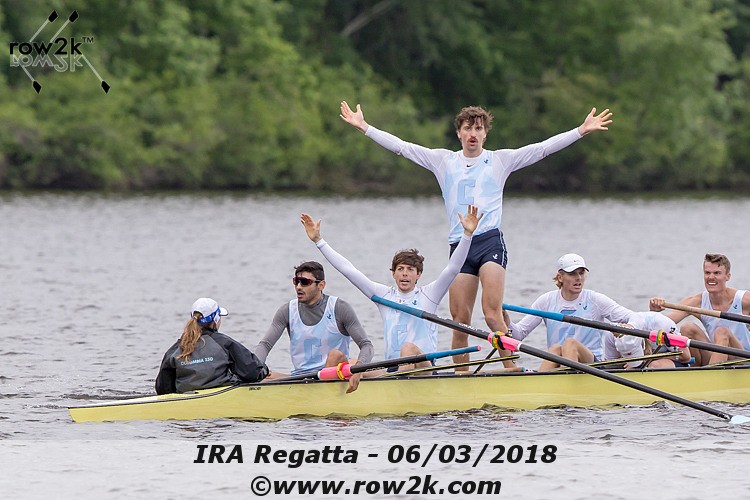 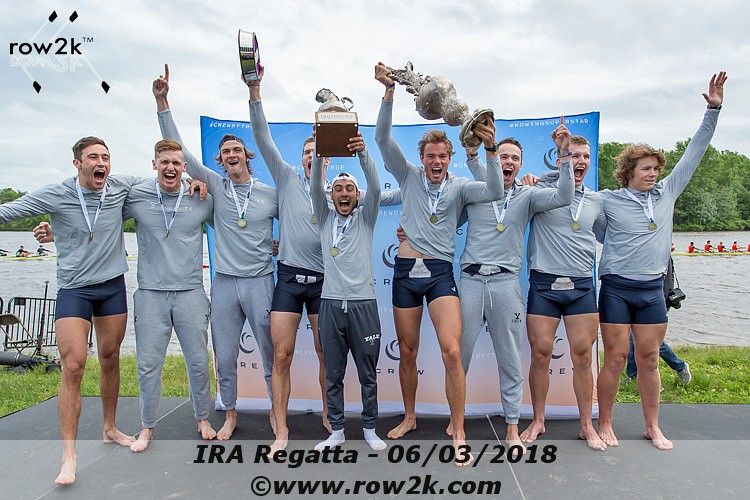 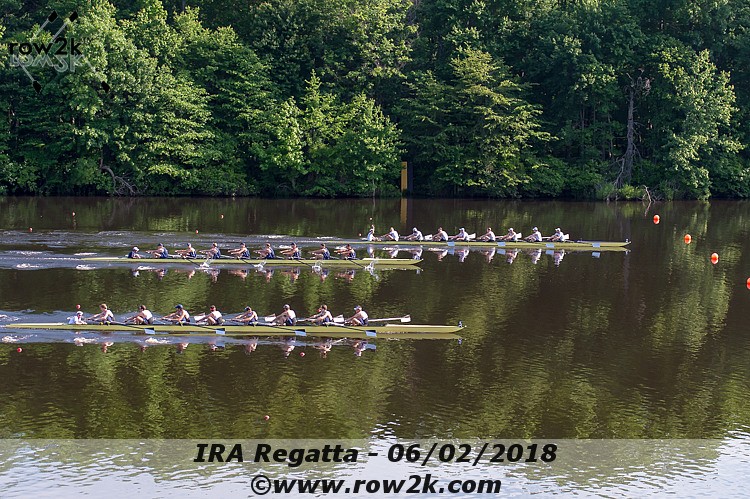