Following Sprints and a disappointing fifth place finish, Princeton lightweight men's coach Marty Crotty was thinking change. Then, when the crew got back to practice and started doing pieces in IRA preparation, he was thinking drastic change.

"The lineup from Sprints, going into practice, was really plateauing and that became evident in some of the training, some of the scrimmaging we were doing with the third varsity heavyweight eight," Crotty said.

"We were about to get on a plane to come to this pre-IRA camp out here in Berkley and we needed a spark, so I made some changes which were pretty drastic. I got the response I wanted." In the heats Friday morning on Lake Natoma, Princeton advanced to the Sunday final in the lightweight men's eight.

"Our goal was to qualify," Crotty said. "We didn't know what to expect. We made some lineup changes from Sprints. So, without getting too specific about our expectations, we're happy to be in the final. It's going to be a great final."

Heats day is the first hurdle for any crew hoping to reach the Sunday medal podium. And there were no huge surprises yesterday morning. Most of the crews that were expected to advance did. A few in the 1V event with potential to make the finals, like BU, Dartmouth had to go through the afternoon reps to reach tomorrow's semifinals.

Leading those crews are the coaches and staffs that have to decide about how much coaching is too much coaching, when it is appropriate to just launch and watch, and when it is time to turn the crews upside down and shake out the dust.

Thursday and Friday row2k visited a few of those teams to get a sense of which coaches were "coaching," and which were letting go. Most of the answers reflected the results the crews were having in the racing before the IRA. In other words, if it ain't broke . . .

But no matter what the situation, there are always occasions that will force a change in direction. It could be an injury, an unexpected illness, or in the case of Princeton, a crew that has gone flat at the wrong time.

"It's hard to explain," Crotty said. "But when a crew is plateauing at a certain point in the season, it isn’t good."

Here are a few answers from coaches who have made critical coaching decisions throughout their careers.

Charlie Butt - Harvard: The approach we take in general is athlete driven. We advise, we coach, we teach technique. But in this sport, there are no timeouts. There is no two-minute warning, you can’t make adjustments. When you send them out, they are definitely on their own, you can't help them.

As the season goes on, it becomes more and more athlete driven. They have to get it right. That's the natural outcome of what we face. So, you're in touch, you're watching and you advise accordingly. But, this is an athlete driven sport. It's definitely about these guys.

Mike Teti - Cal: I have stopped coaching. I feel like our job is done and now it's up to them to execute and it's time to give them some ownership so they are not so dependent on the coach. We've had these kids all year.

There is nothing we are going to do with them in the next 48 hours that's going to make them better. The way they row is the way they row. They're fit. They just have to execute. How to do you prepare for this?

What can Steve Kerr say to the Warriors when LeBron is coming to town? That's the way we feel. He's coached them all year, they're in the finals and now they have to play well.

Steve Gladstone - Yale: We stopped coaching a while ago. With an experienced group, you’re always touching things up. But coaches, as they approach competition become even more aware of the minor flaws in your boat and you have to be very careful that you don't succumb to just being annoying.

So, basically you back off, you allow the crew to develop its own sort of internal leadership. You’re there to just keep an eye on things, to make sure that you’re within the boundaries of what's going to be productive.

Can you adjust to opponents? A rowing coach doesn’t adjust to an opponent, truly. We have our own race plan and we're aware of what the other crews do, where they make their moves on the race course, but basically what we’re looking for is our best race.

So, here's an example. The scuttlebutt is Washington rowed 41 in the last thousand meters in their race against Cal. Do you think that I'm going to start telling guys at Yale, let's scrap our base speed guys?

We’re now going to row 41 for the last thousand meters. I don’t think so. It just takes them away from what you've been doing all year. I think our sport is different in the sense that we have to do what you know you do best. 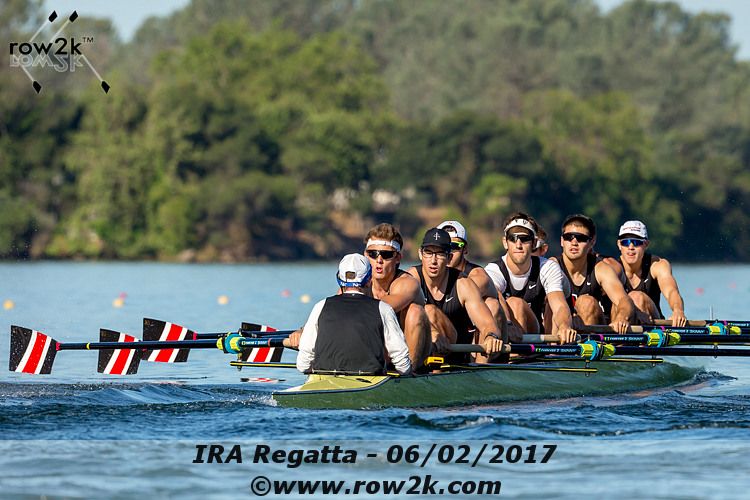 Northeastern advanced despite a runin with a goose

Northeastern had crab trouble in the heats at Sprints and came back to row a fast time in the third level final, finishing a length ahead and with a time that would have placed them fifth in the Grand.

Friday, the Huskies had another bump in the heats, but this time it was a goose in their lane. While fighting for a qualifying position with Brown, and Washington in the lead, Northeastern hit a goose that forced the crew to stop. Northeastern got back on their oars and finished third, which would have placed them in the afternoon reps.

Following the race, they filed an official protest. It was upheld and they were placed directly into the A/B semifinal and they row in a seven-boat semi in the morning.

"They hit a goose at 900 meters and they filed a protest at the end of the race saying their chance to advance was impeded by an outside influence. And we found that there was one," said IRA Commissioner Gary Caldwell.

Caldwell said the protest was supported by video evidence that "their cadence was broken when they hit the goose. And they showed us the cox box recording that showed that they were running at 128 (per 500 meters) before they hit the goose and that it went up to 131 for about 60 meters," he said.

Caldwell said the video showed Northeastern dropped from being in fighting position against Brown to "seven to eight seats down. It was clear their rhythm was broken."

Northeastern coach John Pojednic was glad his crew was allowed to advance. "While it's impossible to know how the race would have unfolded, The crew strongly believed this event meaningfully impacted its ability to challenge for a top two positions and protested the outcome, putting it in the race committee's hands.

"The committee concluded that this event unfairly affected the crew's ability to compete and moved them directly to a seventh lane in one of tomorrow's semifinals. We'll move humbly into tomorrow's semifinal and hope to perform well over a full 2000-meter piece in a very strong field of crews."

The fate of the goose is not known, Caldwell said. 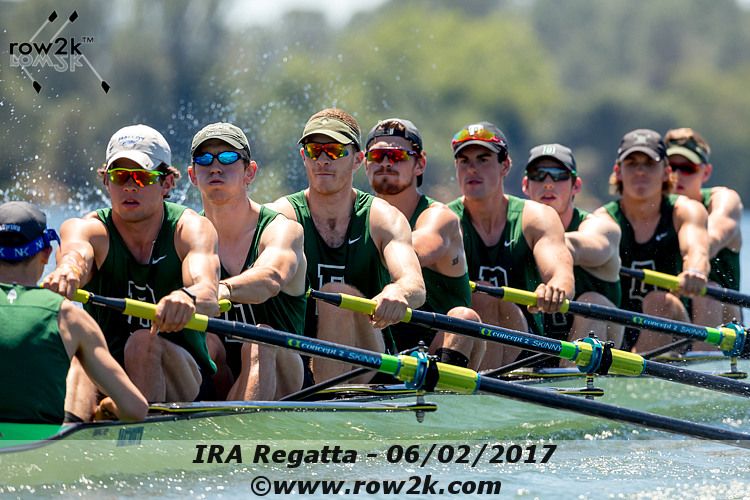 Dartmouth rowed the best time of the reps

And we start with the truly odd at the Columbia heavyweight tent. Surrounded by steady and sturdy tents, Columbia is housed under a blue tarp, attached to the limbs of a tree and anchored by ropes. From the tarps hang improvised - somethings - talismans, crosses, markers, figures - all made of wood and other found materials. See for yourself. 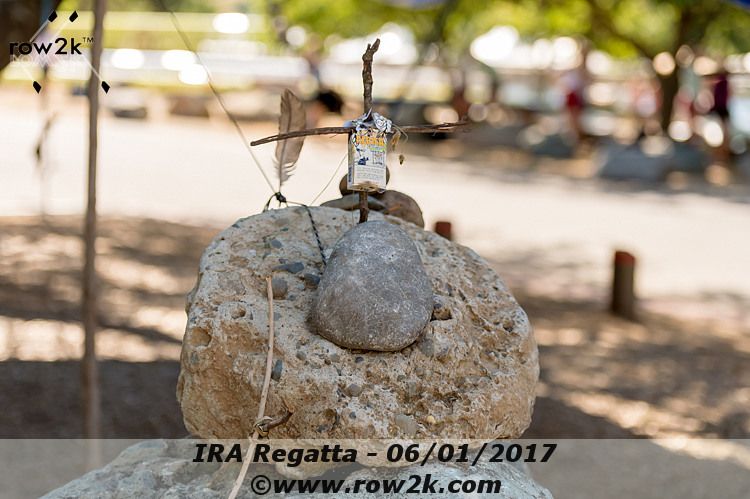 But the real oddity is the stone - I'm not even sure what to call this - an altar? A training garden decoration? Have a look and make your own guess on what it is. The best part comes when you look for an answer. "It's the 3V. Ask them," said one of the Lions.

Having an Exceptional Year

It would be remiss of row2k to have a pre-race conversation with Washington's Mike Callahan and not bring up what the UW women just accomplished at the NCAA Championship in sweeping all three events and going undefeated throughout the regatta under first year coach Yaz Farooq.

"It's been a great atmosphere this year in the shell house and I'm excited to see it. If anything, it's just really inspiring and we’ve gotten stronger and closer to the women and it's just a really great place to be right now."

An expected mid-day opening of the dam at the end of the race course tomorrow will impact the speed of the water flow and in order to ensure fair racing, the morning race schedule was flipped to allow that the men's semifinals are run first.

Here is the revised schedule.

After sitting out the day, the lightweight women get their first crack at the regatta tomorrow morning. To keep busy Friday, most of the women's crew stayed back in their hotels after morning rows and then came back in the afternoon to practice. 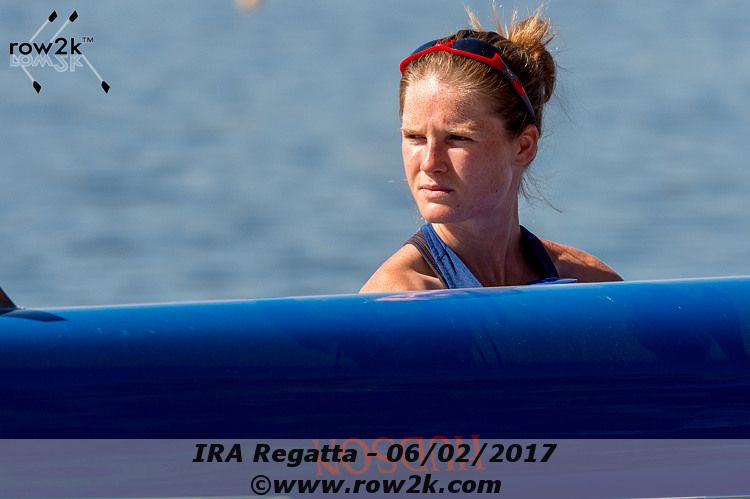 "It's not bad. It's been a nice day. A lot of us are in summer school so we were studying," said Tulsa senior Jennifer Casson. "We're excited for tomorrow. The butterflies are turning a little bit. This is my first time rowing at IRA. It will be good.

"It's nice seeing the competition and sizing up them up and thinking we've got this. We're in it for the podium. So here we go."