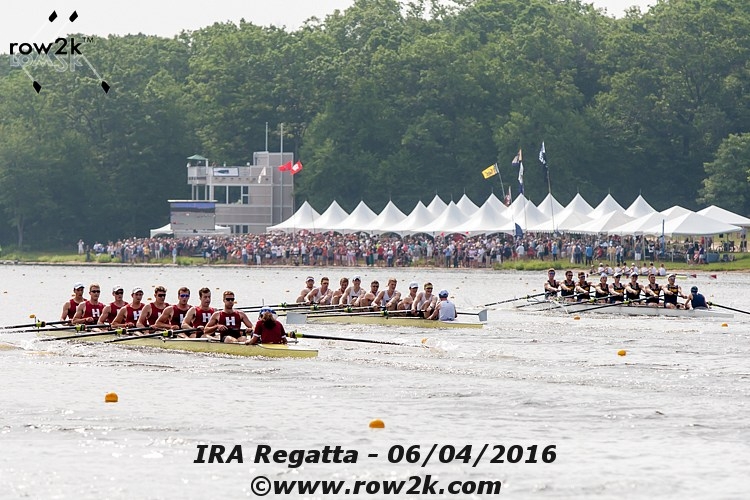 Saturday at the IRA often includes the most fierce, nearly desperate racing of the regatta, but it can also just as easily separate real, reliable speed from hopeful or occasional speed, and the latter seems to have been the case today. Although there were at least a couple photo finishes in the fours, there was only one in all three men's eight events, between Syracuse and Drexel for a spot in the C final. There is a lot of parity at the top of the league, and each final should be extremely compelling, but there does seem to be some separation in packs up and down the overall ranks.

That is, at least on semis day, which can be extremely challenging tactically and mentally, as making a courageous bid for a final that seems just a little out of your reach may cost you the next day, and it is hard not to flash on the extent of the risk involved as each race develops. So let's wait 'til tomorrow morning to see how the overall field shakes out - on the last (early and short) morning of the big collegiate season.

It certainly helped that conditions were exceptional, with a puff of a tailwind building mid-morning that even folks on the water had to stop a minute to notice – which could well have helped the best crews to come up with very representative performances, eliminating some of the vagaries that creep in when conditions are more of a factor. That a V8 crew went sub-5:30 (Cal) and a 2V crew 5:35 (Princeton) in those conditions does seem to support the idea, and certainly proves there is some real speed at the top of the league this year. 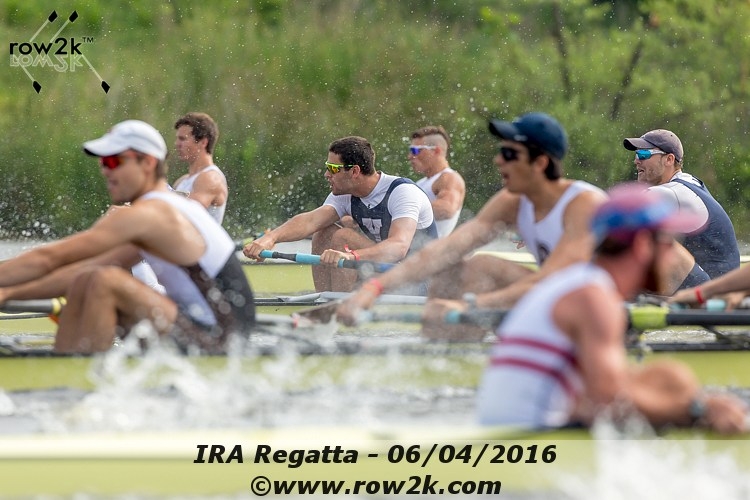 The first semi of the V8

The light women's racing got underway today with both heats and reps, while the light men were idle in their new Friday-and-Sunday format (save for the 3pm weigh-in).

Men's Eights
Last year Yale came into the IRA undefeated, had a terrible semi, and ended up in the petite finals; no such chink in the armor appeared today as the crew bored out to a solid lead early in the first semi, and stayed there, followed by Princeton and Brown getting them clear of any other contenders through the middle 1000, and those three crews crossed the line fairly well clear of the rest of the field of Penn, BU, and Columbia.

The spot in the Grand Final keeps Yale coach Steve Gladstone in the mix to pursue his 12th IRA win as a coach, second only to Charles "Pop" Courtney, who won 14 as the Cornell coach through 1920 (three of Courtney's victories occurred before the current Varsity Challenge Cup trophy existed, so both Pop's and Steve's crews have taken the trophy 11 times).

In the other semi, Cal slipped out to a lead in the early going, with Washington shadowing for a long time as the rest of the field swapped spots a bit. Of yesterday's Cinderella heats crews, Navy made the best shot at a spot in the Grand Final, being called in third a few times by the announcers until Harvard solidified their claim to the third advancing position in the third 500, followed by Northeastern, Navy, and Stanford.

Three teams managed to put their 1, 2, and 3Vs into the grand finals: Cal, Harvard, Princeton, and Washington.

Cal Coach Mike Teti on the Approach to the Semis
The semifinals may be the most dicey race of this or any regatta. As an athlete, going into the race you know it is going to be tough, but you also know you probably will need an even better race the next day – so the inclination to try to hold back a little bit to save something for the final is natural, but also dangerous. We talked to Cal coach Mike Teti today about how to approach the semis, if the crews are thinking about holding back a little

"You might want to hold back a bit, but it is hard to do," he said. "Growing up from Little League all the way through any sport we ever played is to win, and to try to give your best, and give 100%. And then as a coach who grew up that way, telling your kids, well, go 85%, that is hard.

"And what is that, 85%? You've never rehearsed 85%," he continued. "So probably first you have to look at who you're racing against in your semi. But you're racing three days. So if you go 85% all the time, you're probably not going to make it through.

"If you go 100% you might be tired, but you've got to hope that everyone else went 100% and they're all tired. So I find it really hard to tell kids to hold back, because you don't know how it's going to develop. You have your own race plan, but everyone else has their race plan as well. I just think it's dangerous to say, okay, we're going to just cruise through these heats and semis."

What happens then if you feel the crew went too hard for too long in the semi, and you are worried they left a little too much on the water on Saturday?

"I look at the Eastern Sprints as a good example," he said. "They row in the morning, and they've got to come back and go again in the evening. And a lot of them go pretty hard in the heat.

"It's an endurance sport, and we train for these situations," he concluded. "I don't think one race will put them away. I think they're too fit for that."

Lightweight Women
The lightweight women's racing got underway today with heats and reps in the eight, four, and double.

That's right, the light women race the double at the IRA, in recognition of the presence of the event on the Olympic docket; this is also why the light men race the straight four.

In the eight, Stanford comes in ranked first, and their row in the heat showed why; they got clear of the three boat field pretty early on, and even with really no pressure on them posted the fastest time of the day, followed by Wisconsin.

Radcliffe and BU raced a little more closely in the second heat, with a bit slower time, but the times have to be taken a bit lightly, as it was top two to advance, and the gaps from second to third were pretty comfortable. In the afternoon reps, MIT and Princeton earned the last two spots in the Grand Final.

In the fours, the same top four crews made the grand final, joined by UMass and Tulsa, the former of whom went straight to the finals from the heat, while Tulsa made it through the reps.

The double might be one of the more spread out events of the regatta, as some of the athletes have sculled before, while others are "3V" athletes who might have been in a double only in the past month. There does seem to be a bit of speed at the front of the field, though; BU's heat-winning time of 7:42 would have put them third or fourth in either of the fours heats! 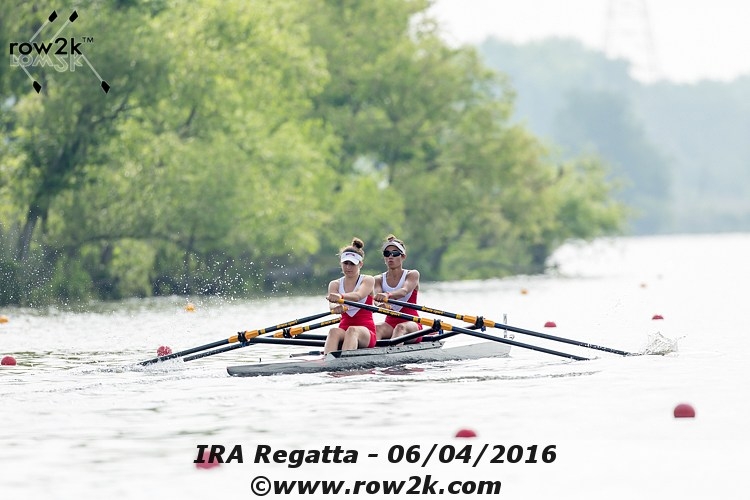 Stanford LW Women's Coach Derek Byrnes on Training Alone Out West
The ranks of lightweight women's crews are mostly concentrated in the mid-Atlantic and northeastern states, with Tulsa (OK), Wisconsin (right, WI), and Stanford (CA) the only teams not set up along the Acela corridor.

For the crews nowhere near an Acela station, getting a sense of how you stack up against your competition can be tricky. Many of the eastern crews race one another several times during the year, and in the past few years have often swapped races as each crew adjusts, improves, gets ahead – and then everyone does rinse, repeat.

This can be an unnerving experience, which gets only worse when you show up at the season-ending championship and have to face off against a huge group of unknowns. Admittedly, in the past couple years the more distant crews have traveled more – but it's not like BU, MIT, and Radcliffe seeing each other go by every day on the Charles. After the morning heats, I spoke to Stanford coach Derek Byrnes on how the distance affects the team, and how they deal with it.

"Yep, that's our life!" he said. "It is a lot different because you rarely get to see your competition, but the individuals that we have on our team are so academically focused that from a day to day standpoint, they just show up and grind, and that is a benefit. 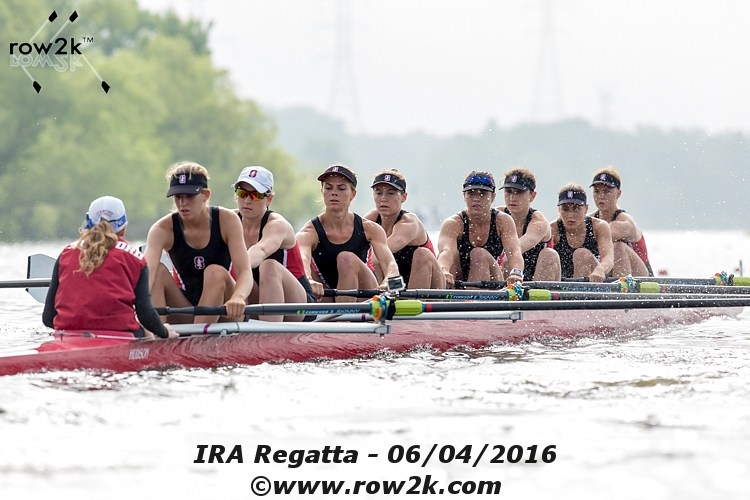 "And we do have people to line up against, mostly open weight programs who are willing to race us, and we know what kind of speed we have to be against them. Out west, almost everything we enter is an open race, which helps us, especially when we come here.

"And finally recently we changed our schedule and flew back east twice this year, and we're going to do it again next year, because the athletes do want to mix it up and to see their competition."

When Stanford comes east, they try to race as much as possible, treating it both as a racing and training opportunity.

"We'll race the lightweight event, but then we'll throw them in as many races as possible," he said. "Every kid will race twice. Some might be a four, and our freshmen race in the novice eight with our walk-ons. We came out here to Mercer once already this year, and I think every kid went down the course I think six times. So, the course isn't foreign to us, and the competition really isn't foreign to us, but after that we can go back home, and when we have six weeks where we just train, they have an idea of what they need to do to prepare and get better."

And what happens when that time and distance evaporates completely when the crews get to the line here at the IRA?

"I do think that we have found both years that the heat here at the IRA is different, because all of a sudden they're polling all the crews, and it's people that, in theory, you've been thinking about the whole year, and all of a sudden you're right next to them."

And how does that play out down the racecourse?

"Last year in our eights heat, it wasn't nearly what we thought they could do," he said. "It was kind of wobbly, but in the end it was just nerves and getting that out. We find that on Sunday, we tend to perform better because now they're now just used to it. So for us, we use the heats to sort of measure what we've done in the last six weeks. I think it's pretty solid so far." 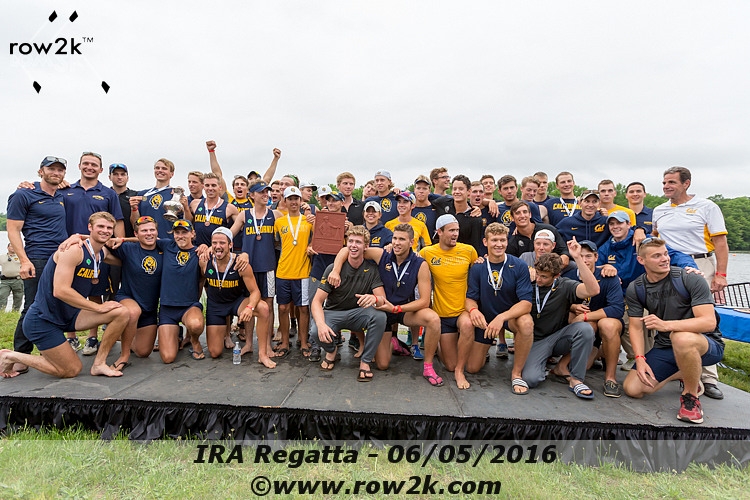 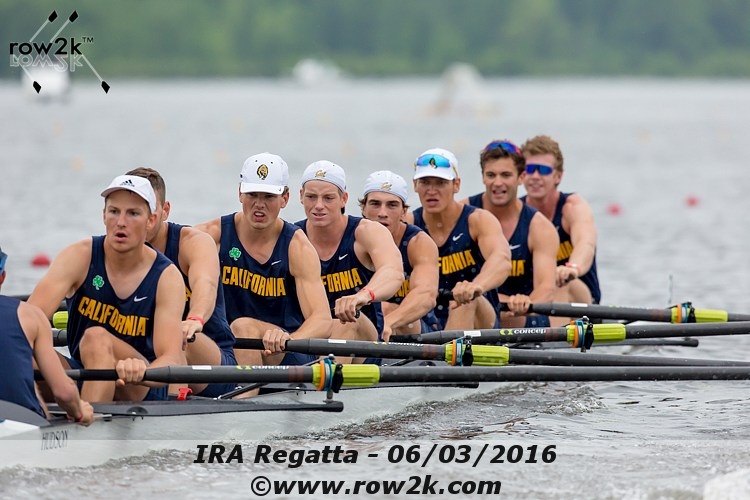 How To Handle the (IRA) Heats: Show Your Hand, or Shut Down?