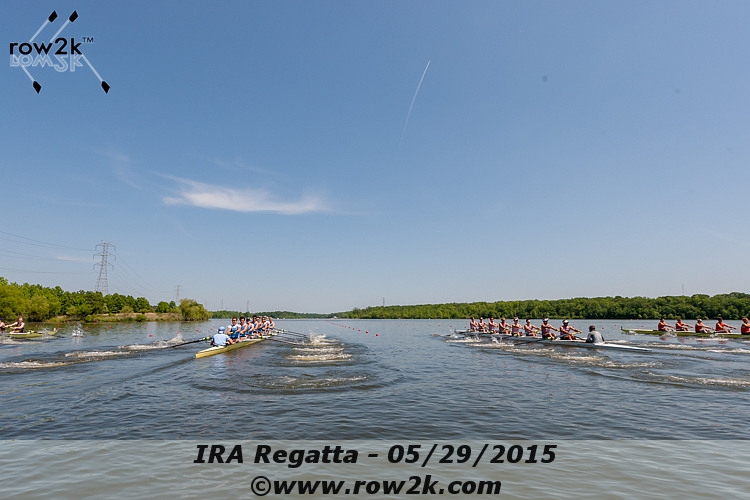 Racing kicked off at 8am Friday morning with beautiful conditions, with temps around 70 degrees at the start of the day that increased to the mid-80’s by the afternoon. There was a flawless blue sky and hardly a ripple on the water as crews launched for the 113th IRA Championship. Seat racing was over, the gossip has trickled down to a simmer, and final lineups have been set. It was time to race!

V8
Racing began with the primetime event, the heavyweight men’s 8. Per usual on day one of the IRA, many of the teams were feeling out the competition. Crews were racing the first half of their race plan then focused on maintaining their position for the second thousand. It was difficult to discern many conclusions today as the top crews definitely shut things down once they were in a comfortable lead.

During heat one of the V8, Washington flew out of the start then settled into a very relaxed pace in the first 1k of their heat. Early on it appeared as though Boston University was going to be in a battle with Navy for the second qualifier spot, but BU took control by the 1000 to finished with about a length over Navy, who by then had FIT (Florida Institute of Technology) close on their heels.

For heat two, Cal flew off the line per usual with Harvard a few seats behind. Both crews had complete control of this race from start to finish. During the second thousand Harvard looked content to finish in second and move on to semis. Cal took a few moves down the course testing things out, but Harvard looked almost bored at times as they came through the last 500.

Harvard’s new lineup looked very controlled today. Following a disappointing performance at Sprints, Harvard made a few alterations to their 1V8 line-up, pulling 3 rowers out of their freshman 8 as well as its coxswain to speed up their V8. While they came in second in their heat, Harvard has obviously picked up a lot of speed over the past two weeks.

Row2k spoke with Harvard’s head coach Charley Butt about the line-up changes to his 8. “When we looked at the season results, teams we had swept suddenly swept us," he said. "Part of that was the integration of their freshman into their varsity boats and we knew we had to integrate as well. Despite being committed to the concept of a freshman 8 the last three years since the rule change, it's gotten to the point where the students should have the opportunity to find themselves in the most competitive landscape possible.” It’s going to be very interesting to see how fast this 8 will be once they implement a more complete race plan in the semis.

For the third heat of the morning, Yale, Brown, and Penn had a strong first 500, but Yale soon established control of the race. Penn was in contention with Brown for a while however Brown slowly inched away after the 1000. Penn seemed to realize their base speed wasn't quite as fast as Brown and faded out of the picture. 500 to go everyone seemed content with their position and the heat finished with Yale in 1st and Brown in 2nd.

The final V8 heat of the morning may have been the most surprising of the heats. Princeton had a very good start and established a boat length lead over Northeastern by the 1000 meter mark. Per the seeding, this was a bit of a surprise since Northeastern was the top seed in this heat after coming in second to Yale at Sprints.

However with only around a .5 second difference between Princeton and Northeastern at Sprints two weeks earlier, these results weren’t outside of the realm of possibilities. What was compelling was the battle between Cornell and Northeastern for the final qualifier spot. While the battle was fairly close for most of the course, Northeastern was operating at a much lower rating than Cornell. By time both crews reached the finish line Northeastern had just a little more left in the tanks and was able to pull ahead for a 3 second margin over Cornell. Northeastern appeared to expel a lot more energy during this heat than one might have expected for the 4th seeded V8. This could lead to some very interesting results in tomorrow’s semi-final. Per the pre-race seeding for this regatta, all of the top 8 crews advanced straight to semis tomorrow.

2V8
Washington's team depth was on full display at the start of the 2V heats as they quickly gained control of the race early on. Cornell, who won the petite final at Sprints, rowed a very controlled race for the first thousand as they sat comfortably in third behind Harvard. With how racing had progressed up to this point one would assume this is how the top three would finish.

Cornell however had other plans as they kicked it into another gear and came flying through Harvard in the middle thousand. At the finish line Cornell finished a boat behind Washington and a boat ahead of Harvard sending Harvard to the reps later in the afternoon. There was roughly 100 meters of open water back to the next two crews in this heat.

For the second heat of the 2V8 there was a bit of a rough start for Yale who found themselves trailing early. Cal on the other hand jumped out to an early lead and maintained control of the race throughout the entire course. Yale however collected themselves and slowly worked their way back into the race. Wisconsin looked to be very strong early, but once Yale got it together they worked right through Wisconsin to control second place. The race finished in parade fashion with Cal in first and Yale in second.

The third heat of the 2V8 had the appearance of a dual between Princeton and Brown early on. Unlike most of the heats we had seen up to this point, both crews were racing at a much higher rating. Princeton remained high going into the second 500, but once they relaxed their rate, they pushed out to a lead by the 1000. With 500 to go, Brown made a slight push to keep their Ivy League rivals on their toes, but Princeton held them off by bumping it up themselves. Princeton finished with a 3 second lead over Brown who had open water back to Penn.

The final heat of the 2V8 was probably the least dramatic and most controlled of the day. Boston University looked very efficient and controlled race from start to finish. By time they hit the 1000 BU had established a length lead over their hometown rivals Northeastern. Another parade continued through the finish. Boston University finished second at sprints just behind Princeton and looked just as strong today.

3V8
There was a very clear distinction between the advancing crews and those sent to the reps today in the 3V8. This event has grown significantly in size over the last few years however the results today highlight the depth of the top teams in the country. With the exception of heat 2 in which Boston University, Harvard, and Cal battled it out for the two semi-final spots with only two seconds separating first and third (Cal and Harvard finished 1st and 2nd), there was an average of 13 seconds of open water back to the next set of crews in the other heats.

Freshman 8
The freshman 8 has changed significantly following the rule change three years ago that allowed freshman to row in events other than the freshman race. This year in particular with coaches doing everything possible to speed up their varsity boats, many of the fastest freshman have been pulled out of this event to add speed to their other boats. Cal and Washington have been the able to sustain these crews the last few years because their program depth, which is why Cal and Washington were heavy favorites to advance directly to the finals.

Heat one progressed as expected with Washington earning the automatic bid to the final however the biggest surprise of the day came during the second heat. Cal has had one of the better freshman boats in the country this year and one might expect them to walk away with this heat yet again. Wisconsin had other ideas. Wisco was even with Cal early in the race and slowly pulled into a lead during the middle thousand. Cal closed a bit in the last 500, but Wisconsin held on for the upset by 3 seconds over Cal.

“It’s been the same guys in that boat all year including 3 novices who are just doing a great job” said Wisconsin coach Simon Carcagno after the race. “I am just really happy with how they are racing right now. We have kept them together because it’s a group we think has a lot of promise.”

V4
Unlike last year, the varsity 4 heats appeared to have the fastest crews in different heats (last year the 1st, 2nd, and 3rd place crews were in the same heat) however once again the depth of Washington and Cal was quite apparent as they moved onto semis from the heats along with Stanford and Cornell. Wisconsin finished second in their heat to Cal and had to race in the reps this afternoon, but keep an eye out for that 4 on Sunday. They have the potential to medal if they make it to finals.

Reps
After a short break from the morning heats, teams were given a shot at redemption with the afternoon reps. For the V8 Navy, Columbia, Penn, and Cornell were able to advance out of reps to the semis. From this group, Penn may be the most disruptive for the semis, but it will be a very uphill battle against a very strong field in the varsity 8. For the 2V8 Harvard was able to advance out of reps after the upset by Cornell in the heats along with Wisconsin, Penn, and Dartmouth.

Tomorrow
As lightweight rowers turn into mid-weight rowers after enjoying water and actual meals for the first time in a while (weigh-ins are over!) we prepare for the intensity of this regatta to kick-up significantly tomorrow. This year, there will be two new events added to the lightweight schedule, a straight lightweight men’s 4 and a lightweight women’s double will make their debut.

While everyone other crew at this regatta will be able to see their opponents at least once, these two events are finals only. Make one mistake and you are out of the medals. Without a chance to scope out the competition ahead of time, the winners of these races are anyone’s guess. A coxed lightweight men’s 4 will also race tomorrow with heats in the morning and finals in the afternoon. No need to wait until Sunday for hardware, teams will be ready to collect tomorrow!

As for the heavies, one will witness the anxiety levels rising significantly for every coach in the boat yard tomorrow. While there was a sense of calm today, everyone will be prepared for battle stations tomorrow as a chance for a national title can be dashed with one mistake in the semis.

The semis for the 1V8 tomorrow will be absolutely brutal with races pitting the fastest from the east against the fastest in the west. While there will still be some gamesmanship at play during the semis, we should have a much better idea of what will transpire Sunday as teams implement a full race plan as they battle for a spot in their respective finals. 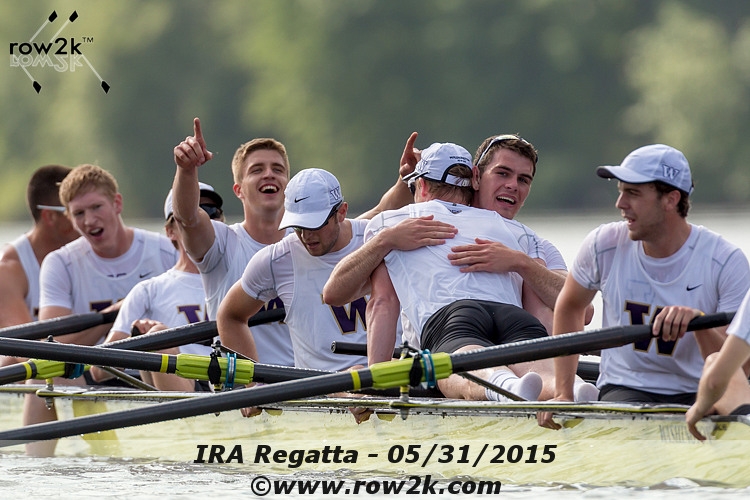 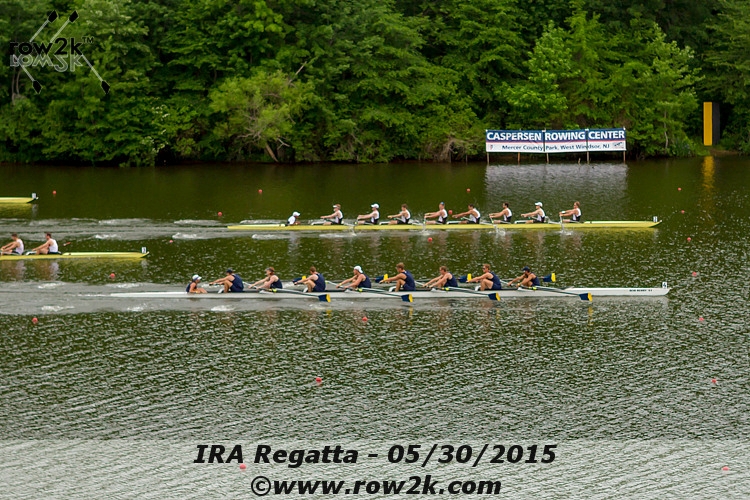 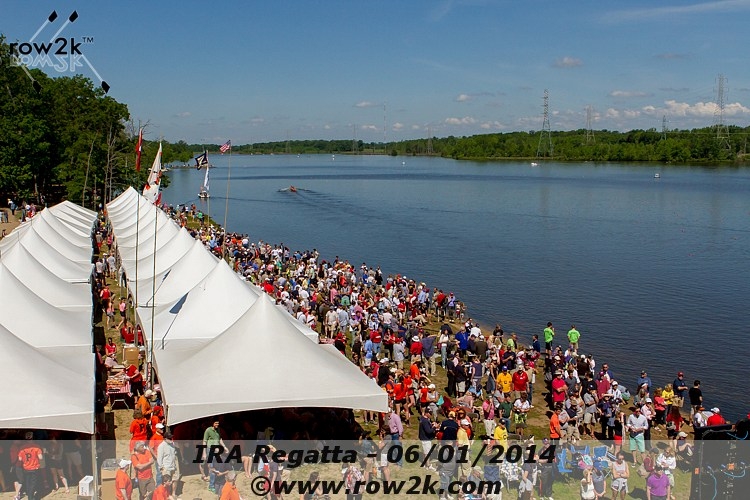 2015 IRA Preview: Kick The Tires And Light The Fires
Get our Newsletter!
Enter your email address to receive our updates!