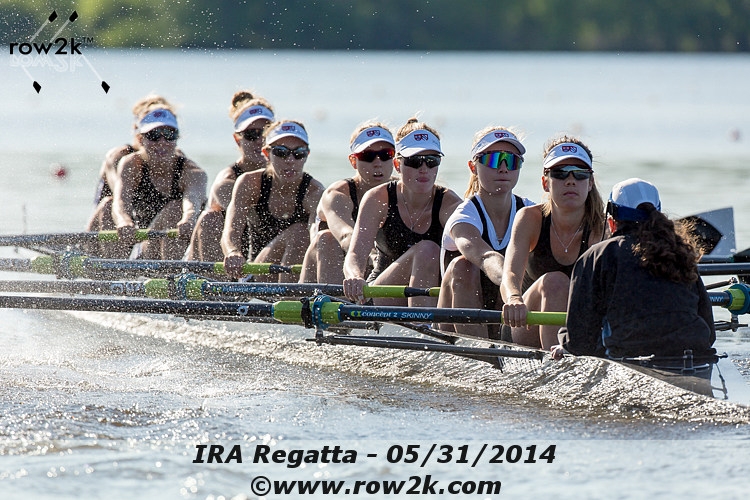 The 112th IRA regatta kicked off day two with progressively deteriorating conditions. While the conditions were ideal yesterday, a strong crosswind made for a less than pleasant row today, particularly for those in lanes 3 through 6. Early on the start and finish lines were very protected, however even those areas deteriorated by midday. Despite the conditions, today was the day for those hoping to earn a spot in the grand finals to make a statement, and the competitors today did not disappoint.

Lightweight Women
The lightweight women’s eights had their first race of the regatta to start the day today, but faced a bit of a hiccup early on. During the start of the first heat, Princeton’s 4-seat jumped her tracks and stopped the race. It appeared for a moment as though the referees were going to let the race continue, however the rowers were called back to the start and the race was re-run (Princeton’s rowers looked panicked for a moment). On the next go, Boston University and Princeton jump out to an early lead, but undefeated Radcliffe slowly took control during the second thousand and cruised home for the victory.

Meanwhile, BU and Princeton remained in a battle for the second qualifying spot. BU maintained a lead over Princeton, but was Princeton slowly began to chip away at that lead. Unfortunately for Princeton it was a little too late, and they were sent to reps.

row2k caught up with Radcliffe head coach Lou Berl after the race. “We went out there very confidently this morning," she said. "They executed their race plan while really concentrating on various aspects of the race… BU had a great start, but the guys said they just knew as soon as they lengthened they were going to figure it out and find their pace.”

The second heat of the women’s lightweight 8 was slightly less exciting, with Stanford’s 8 clearly taking control from start to finish. In somewhat of a surprise, Bucknell remained within striking range of Stanford to claim the second qualifying spot. The rest of the field was open water back to these two leading crews. By time the lightweight women’s 4s crossed the finish line later in the morning, the wind had picked up enough for the fairness committee to begin the process of swapping lanes around for the upcoming men’s event’s. It’s always a bad sign when random cutlery from the team tents starts to fly around the boatyard.

Varsity 4
Washington left little doubt in the minds of observers who was in control of the first varsity 4 semifinal as they really separated from the field during the later half of the race, as the wind seemed to be having an effect on the other crews, but not Washington. The race more or less finished like a parade across the finish line with Washington in first, BU second, and Wisco third.

For the second semifinal of the varsity 4, Cal had an aggressive start and held their lead through the finish, as Georgetown was the surprise competitor who finished just behind Brown for the final grand final spot. Georgetown is coached by Tony Johnson, who is in his final year of coaching at Georgetown after 18 years as their director. Georgetown’s varsity 4 was the only boat he brought to the regatta.

“The guys are please because they haven’t been to the IRA final, but for me it’s one more step and in part expected," he said. "It’s a group of good guys and now the challenge is really out there for them.” While Tony wanted to focus on his guys, when asked if he felt a little surreal coaching his last regatta, he said “I have been planning and thinking about this for a long time… now there is the aspect of oooh there won’t be any more of this, it’s a little unusual.” Good luck with retirement Tony!

3V8
This is the first time in IRA history that there has been a 3v event; in the points tally, the higher of a team's finishes for the 3v or Frosh 8 will add to a program’s point total. This allows more teams to get into the fold for the points trophy, as some programs have a strong 3v while others have a good group of freshman.

At this point, it was starting to sound a little redundant, but yet again it was Cal and Washington taking home victories in their individual heats for the 3V. Both Pac12 schools have very deep programs, and it should be a good showdown tomorrow when these two heavyweights finally face off in June. One shouldn’t discount Brown however, since they could very easily be right in the middle of the fight going into the last 500.

2V8
The best part about the IRA is the deeper the regatta gets into the weekend, the closer the field becomes. The first semifinal of the varsity men’s 8 made it 1500m down the course without a single boat losing contact with the boat next to them. Cal seemed to be the only crew in control at the 1500, with about a boat length lead over Brown and Princeton. Brown and Princeton were in the qualifying position for the final, but would not let the other crew gain an advantage over the other, racing bow ball to bow ball all the way to the finish. As they crossed the line Brown was inched out by Princeton by .24 seconds at the line.

The quality of the racing remained high as the second semi of the 2v8 came down the course. Washington maintained and established a boat length lead for almost the entirety of the race, while an epic battle for second and third took place behind them. BU, Navy, and Northeastern were virtually even as they entered the last 500 of the race. With only three advancing crews and Washington out of reach, only two from this pack would advance to the final. As the crews approached the finish line, Northeastern gained the largest advantage of about a canvas, but Navy and BU were still in a fight for that final qualifying spot. At the last moment Navy snuck ahead of BU for the final qualifying spot by .5 seconds.

Varsity 8
Finally, the semi that everyone had been waiting on was on deck, the varsity 8s - or as the spectator next to me put it, “Here come the big boys.” The varsity men faced the worst wind conditions up to that point, as whitecaps were visible at the 1500 meter mark. The battle between Cal, Washington, and Brown was very aggressive off of the start. Cal pulled out to an early lead, which seems to be their MO this season. The strangest part about the start of this race wasn’t Cal’s lead, but Washington trailing Brown. Brown kept a lead over the Washington Huskies, but was eventually tracked down during the later half of the race.

Then with 500 to go, Washington finally started to separate from Brown, and began to gain ground on Cal. The last time Cal and Washington raced each other, Cal pushed out to an early lead similar to today, but Washington methodically reeled them in and passed Cal to take the victory. As both crews entered the sprint, Washington looked as though they were ready to wind it up to catch Cal yet again, but Cal said “not this time” and bumped their rating up to hold off Washington by open water through the finish.

This is the first time Washington’s varsity 8 has seen the bowball of another crew ahead of them at the IRA in 3 years. The last team to beat Washington at the IRA was Harvard in 2011 during the semifinals, but Washington went on to win the final. Will Washington have a similar response for the grand final tomorrow? One could tell Mike Teti's Cal Bears put a lot into today race, which was visible by Teti’s excitement at the finish line. The real question for the finals is… Does Washington have a little more to give? We will find out tomorrow!

The second semifinal of the varsity men’s 8 began with the appearance of another upset in the making. Princeton shot out with the early lead over the Ivy League champ Harvard. Not to be outdone by their rivals, Harvard reeled Princeton back in by the 750 meter mark. As soon as Harvard pulled even, Princeton responded to Harvard’s push and pushed the lead back out to a few seats. Unfortunately for Princeton, the Tigers could only hold the lead until the 1500 meter mark. Wind conditions at 1500 were pretty stiff, but Harvard and Princeton were slightly more protected over the rest of the field because of their placement in lanes one and two.

With Harvard and Princeton in control, the battle for the 3rd qualifying spot heated up. Yale, who hasn’t made it to the grand final of the varsity 8 since 2006, cranked it up around 40 stokes per minute for the last 500 meters of the race in order to hold off BU by 4 seconds. After the race, row2k caught up with Harvard’s head coach Charlie Butt. “It’s like last year’s IRA and this year’s Sprints, there were a lot of lead changes and an awful lot of good races going on to get into the finals… The winds made the race very difficult to manage.”

Tomorrow, the winds are supposed to die down, the lightweight men will finally make an appearance, and champions will be crowned. After all of the training and planning, one race will separate these crews from being history or becoming history. Races begin at 8am tomorrow morning, be sure to set your alarms because this is the one race of the year you don’t want to miss. 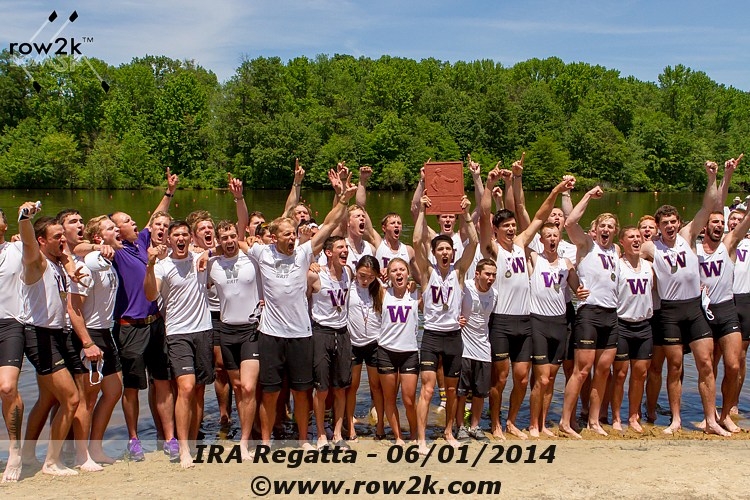 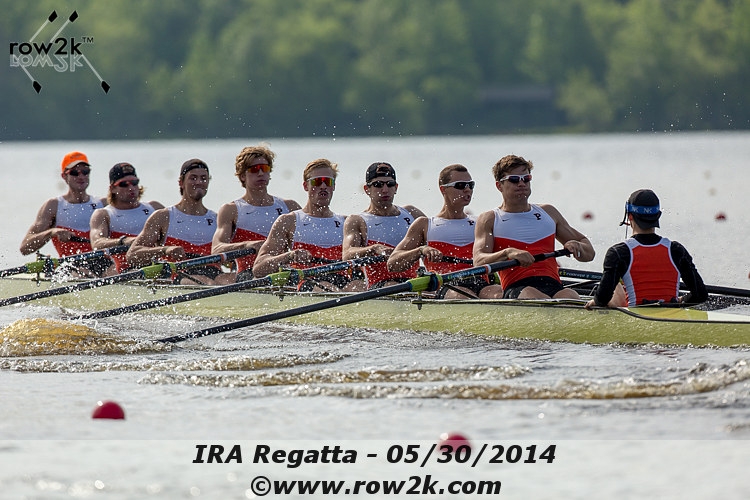 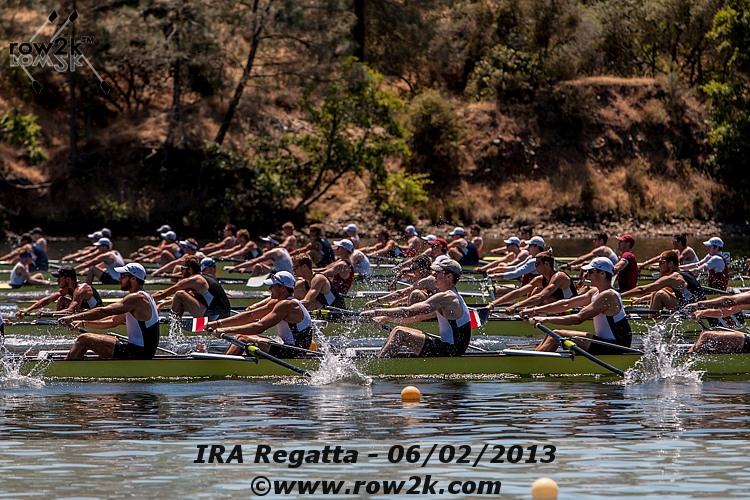