One could argue that semis day--with twice the number of epic races--might even trump the IRA Saturday as one of the best days in college boat racing each year, and today, once the crews actually got down to racing, was no exception. Getting to that point required a bit of patience though: between a passing storm that cleared the course and left a 75-minute delay in its wake, not one but two lane-change concessions to the building headwind, and then some last-minute equipment problems in the final V8 semi, it seemed to take forever to get to the racing that race fans had waited all spring to see.

For all the wrangling about lanes--the central issue being that the wind direction today favored the Lane 6 side of the course, but Lane 6 itself, being notoriously shallow, is itself undesirable--most of the seeded crews in the men's eights advanced, so the lane switches did just what they are supposed to do: protect the three crews in each semis which had advanced through the heats. But the particular direction of today's wind gave Lane six appreciably better water in the final 600 meters, and so, for all its feared shallowness, Lane Six was opening the door for some exceptional sprints to the crews left over there as the seeded crews were moved around in the middle of the course--towards, but not into, Lane Six. The final solution, for the last two races on the men's program, was to avoid lane six altogether, and the whole field was shifted over a lane, to race in Lanes 0-5.


That shift worked for the top two seeds in each V8 semi--Brown and Harvard in semi 1 and Washington and BU in semi 2--but the wind in the middle of the course left lanes 1-3 equally exposed, and the 3-seed in each semi--Princeton and Wisconsin--found themselves battling unseeded crews through the body of the race and came up short: Princeton, by maybe one heartbreaking seat, to Syracuse; and Wisconsin, by a touch of open water, to Cal.

Tomorrow's final could be wide open, and will likely be run in a polar-opposite tailwind - but there were a few "hoo boy" results today, such as Syracuse sprinting into their second Grand Final in as many years, and Cal capitalizing on a much improved row in the reps to find some finals-worth speed. Then there was with Brown: better lane or no, Bruno took it to Harvard, stretching what had been fractions of a second in Worcester to a full five second win, and that into the stiff headwind. If an eastern crew has the speed to stick with the Washington and play spoiler, that speed would have to look an awful lot like what Bruno showed today.

For Washington's part, the semi a year ago was maybe the only stumble by the Huskies in nearly 24 months, and there was no replay of that here--they won the semi and did it convincingly--but right on their stern were the BU Terriers. Truth be told, BU never really let go of the Huskies, playing the fiesty Terrier role to the hilt against the bigger "Dawgs" of UW. Watching them race, one would have a hard time arguing that BU, who bested Cal and narrowly missed beating Harvard yesterday, are not very much in the hunt for medals tomorrow.


The 2V8 semis, racing before the Lane Six embargo plan was hatched and enacted, did serve up the biggest upset of the day, when Stanford's 2V, in Lane Six, edged the Navy crew on the far side of the course by just over a second. Princeton was the seeded crew that lost out, but the Tigers opened the door early in the race by struggling a bit in the headwind. Lane Six nearly carried the Penn 2V and Wisco 1F into the Grand as well, and may have even kept the Dartmouth 1F in the mix longer than expected--and those were likely the four results that prompted a harder look at the lane assignments ahead of the V8 Semis.

The results from the 2V would seem to be setting up Washington for another win, with Cal and Wisconsin in it for medals with Harvard. On the Frosh side, both Washington and Cal feasted on the headwind: the Huskies put better than a length into the Northeastern crew--who finally got in front of Harvard today, perhaps for good--and the Golden Bears got a full ten seconds out on the Brown Bears. Cornell's Sprint medaling frosh will round out this one, and no doubt be lurking in an outside lane, ready to take a medal if one is in the offing.


The Light women got their two-day portion of the regatta going today, and the headwind put a real premium on the strongest of the equally weighted crews: Wisconsin and Stanford walked away with the morning heats in both the eight and the four. Radcliffe and Bucknell also went straight to the final, but were both open water behind the leaders and open water ahead of the crews headed to the reps. Stanford had maybe a bit more headwind in the second heat of the eight, but they also had the bigger margin--Wisco was chased a bit harder in the first heat, by Radcliffe--so it is hard to say how the final will go, especially if the wind does turn tail, but it looks like the championship may come down, again, to the Badgers and the Cardinal.

From the reps in the afternoon, which ran in some really brutal conditions for any weight crew--white-capping headwinds are no fun for anyone--Georgetown and Princeton advanced in the eight, eliminating MIT. Then, the "four-to-go-one-to-derig" rep in the fours saw Buffalo--who is only racing in the four--take the win, followed by Radcliffe, Georgetown, and Princeton. MIT was, again, the lone crew not moving on to a final tomorrow.

Men's Fours
With all the talk about lanes and seeds, there is something a bit more carefree about the unseeded, undrawn, free-for-all that you get with these fours races at the IRA--but these fixtures are no less intense for all that. Washington, to no one's surprise, cruised to a win in their semi of the V4, and why not: the team depth of the Huskies put an '08 fourth-place Olympian in the fours group, which is an impressive pedigree for any collegiate small boat in the States. Behind the Huskies though, it really could be anyone's race: Cal looked impressive in the heats; Georgetown led almost all the way to the line today, from lane 1, no less; Brown looked very patient and strong in the headwind, rowing down those Hoyas; Navy held on to deny heat winner Wisco a spot in the Grand; and Northeastern took every punch that Temple could throw at them and then closed on Cal in their semi. May just come down to who really, really wants the medals in this one.

The Open Four racing was "just" reps today, so heat winners Washington and Cal got the day off. Wisconsin nearly got the win in the heat over UW, and got out ahead today to qualify, chased hard by some scrappy Midshipmen from Navy. Harvard and Brown grabbed the last two spots in the Grand, over Cornell, in the other rep, and all four of these crews really could have a shot at any medals that UW and Cal don't safeguard.

To Saturday, then, and a wind that will blow tail instead, pushing this spring season to a speedy end with--hopfully--some great national championship-worthy racing. 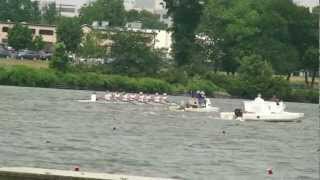