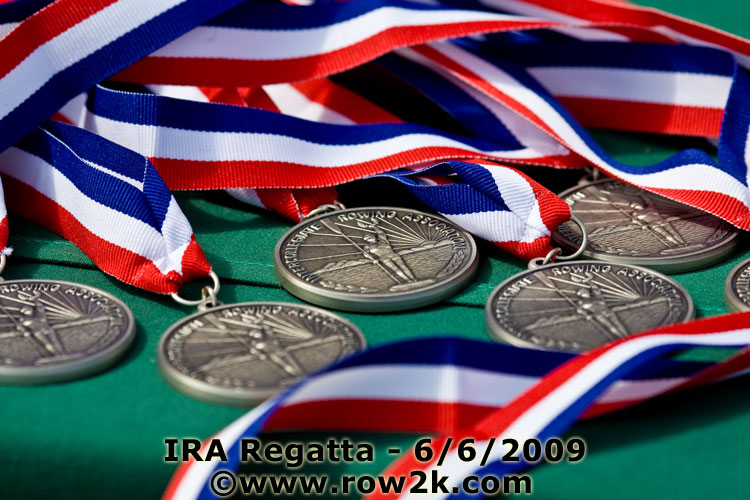 On Tuesday,  the Board of Stewards of the Intercollegiate Rowing Association (IRA) announced  the final list of crews qualified and accepted for the 2012 regatta. The size of the regatta (18 entries) and format of the bid/qualification process did not change substantially this year (and you can read more about how that process works, and how it played out in 2011, here), though there was one change--and that one change did have an impact on how many At Large bids were left on hand in the end.

When discussing the IRA it is important to remember two things: just like schools competing in the Women's NCAA Championship, IRA teams must have varsity status within their respective Athletic Departments, and--in addition--Varsity Eights must qualify by rowing a lineup compliant with the IRAs “no freshmen” rule. The EARC schools follow this rule at all their events, but at races that do not enforce this IRA stipulation per se, crews still need to comply with the rule in order to actually be eligible to earn a qualifying position.

The idea of the qualification process the IRA now uses is to promote growth in the sport by drawing at least part of the field from regattas other than the EARC Sprints and the PAC-12 Regattas where the vast majority of nationally-ranked varsities compete. So, the IRA Stewards look to the SIRA Championship for southern and eastern crews, the WIRA Championship for west coast, non-PAC-12 programs, and to the Dad-Vail Regatta, which is of course the destination on Championship weekend for crews not racing in Worcester or Sacramento.

For 2012, the qualification rules used at SIRA, WIRA, and Dad Vails were amended to permit the top IRA-eligible finisher to win the available IRA bid, regardless of whether or not they won. In 2010 and 2011, the one spot available (or two spots, in the case of WIRAs) could only go to the winner of that event (or top 2 at WIRAs), if--of course--the crew in that place was itself an IRA-eligible lineup. That requirement to win meant that a club crew in those regattas, or a varsity program racing with freshmen in the boat, could win and render the bid unclaimable--which is precisely what happened in each of the previous two years, and each time, there were IRA-eligible crews near the front of those finals, just not in the crucial go-ahead spot. In those cases, the unused bids went back in the "At Large pool" and the end result was a greater number of EARC crews being invited (in 2011, the IRA bids went 13 schools deep from EARCs).

With the change this year, the door was opened for Drexel, the Dad Vail bronze medallist but top IRA eligible crew, to take the bid on offer there--which meant that there was one less At-Large bid on offer. Combined with the SIRA's one bid being claimed by George Washington, the Stewards were left with only three At-Large bids. All three went to the EARC group, but that one fewer bid meant that only 12 would be invited this year, and that there would be no slots left in the field for the crews finishing 13th and lower.

All of that math was in hand as the racing unfolded at EARCs and PAC-12s on Sunday, and crews finishing outside the EARC's 9 automatic bids or the PAC-12's 3, knew they could not be more than three spots away from the final spot and still have a chance at the IRA. Beyond that, of course, there was the worry about how the At Large bids would be awarded--all to EARC crews, an extra to the PAC-12 for Oregon State (the 4th place finisher), or even to another Dad Vail finalist like Temple. In the end that did not happen, and the final spots went to Cornell, Penn, and Dartmouth, who finished 10th, 11th, and 12th at EARCs.

With that in mind, here is the 2012 IRA field in the Heavyweight Men's Eight, with an eye towards how each team qualified, and then let's take a quick look at the rest of the entries in the other heavyweight events, the light men's events, and the light women's events.

Heavyweight Men
In the Varsity Eight, the following 18 schools received invitations to compete for the IRA National Championship, and have the option of also entering a Second Varsity Eight, Freshmen Eight, Varsity Four, and Open Four. Crews are listed by qualifyier, with their placing at the regatta where they qualified

IRA affiliate schools which did not qualify for a Varsity Eight invitation have the option of racing in the Varsity Four only. The following schools will exercise that option and compete in the 16-boat deep Varsity Four event--which is down 5 entries from 2011:

The 2nd Varsity Eights field will feature 17 crews; Northeastern will race in two fours instead of fielding a second eight.

The Freshmen Eights field will feature a full field of 18 crews.

The Open Fours field will feature these 13 crews, all of whom are entered in the Varsity Eight and competing as a team:
Brown, Cal, Cornell, Drexel, Harvard, Navy, Northeastern, Princeton, Syracuse, Washington, Wisconsin, and Yale

Heavy Hitting in the Headwind