Semifinals racing at the IRA is not a thing for the faint of heart, probably for athletes and coaches alike. Today's racing at the IRA did not disappoint in this regard, with more than a few races that came down to the last strokes, if not THE last stroke of the race for the difference between the Grand and the Petite.

Getting right down to it, in the V8 semis, the two top-ranked crews, Cal and Washington, rowed in the same semi today, and served notice that tomorrow's final will very likely be another rematch between them--Cal led the race early, UW came even in the 2nd 500m, and then these two crews made the semi essentially a dual meet; the battle for that 3rd and final spot in the Grand between Syracuse and BU took place almost two lengths of open water back, whew.

At the line it was Washington over Cal by about 3 seats, with Syracuse coming up 2/100s ahead of BU; the finish was so close that at least one rower in the BU crew started celebrating as they crossed the line, they thought they had it.

If the first semi was clear-cut at the front, the 2nd semi was completely off the hook; an all-EARC, all-Ivy affair, with Cornell, Dartmouth, Harvard, Yale, Brown and Princeton all in the running, this one went literally wire-to-wire; Fred Schoch in the commentary boat called four different crews in the lead over the course of the race, with only Princeton never really able to get real traction.

Cornell lead early, then Yale got their bow in front for a bit, before Harvard made a move; then Brown picked up the pace and moved into a solid lead just past the 1000m mark before Harvard surged back on their sprint, into the lead, with Brown and Cornell fighting off Dartmouth at the line; at the finish, Harvard had their nose in front by a seat, with Brown and Cornell just 1-2 seats up on Dartmouth, virtually level.

Looking at the times, as wild as semi #2 was, it was still a good 5 seconds slower than the pace of the Cal/Washington race. Conditions today were fair, with the wind perhaps a little shifty, so comparing times is likely not possible, but Cal and Washington look to be the contenders at this point.

Incidentally, the second semi in the Men's V8 was the only semi on the day where NO crews in directly adjoining lanes advanced, with lanes 1,3 and 5 punching their tickets, evidence of how closely packed the top 12 crews were.

(See our V8 semis video for a closer look at the racing.)

The JV 8+ semis were hard fought also, if somewhat less surprising than the V8 semis. Cal, a much-improved Harvard crew, and Cornell qualified out of the first semi, while Washington, Brown and Wisconsin made the final out of the other semi.

As we'd written here a few days ago, the JV event seems to be one of the more evenly matched ones at the regatta, and this will likely be a hugely entertaining final tomorrow.

Some folks might consider this unorthodox, but the Cal JV was seen headed to the starting line with a bungee around the hull during the warmup; clearly it didn't slow them down, as they won their semi.

The Frosh 8+ semis also produced few surprises, although a spirited finish in semi #1 almost carried the BU frosh eight past Stanford at the line; Cal won this first semi, handing the undefeated Harvard freshmen their first loss of the season in the process, just ahead of Stanford.

Call it youth or exuberance, either way, the frosh semis saw the highest rates of the day, with the commentary team calling 52 off the start for Stanford, and 50 for Harvard.

(And if you are keeping score at home, the BU Frosh and V8, who both came fourth in their semis, were denied spots in their respective finals by a combined 26/100s of a second today; you'd hope that these athletes wind up on the good side of a result like this down the road somewhere.)

The second semi of the Frosh 8+ saw Washington, the clear favorites in this event, pacing the field, open water ahead of Princeton and Cornell.

The finals in the Open and Varsity Fours are set as well, with Cornell, Washington, Brown, Wisconsin, Cal and Oregon State racing for medals in the Open event, while Washington, Cal, Brown, Wisconsin, Stanford and Georgetown reaching the finals in the Varsity four. The Varsity fours semis, true to the day, saw ferocious finishes, with Stanford and Georgetown separated on the line by 9/1000s, with George Washington, in 4th, only 7/100s behind them, and out of the final.

The final heats of the regatta were run early this morning, with the Lightweight Women's Eights and Fours going through their progressions. Wisconsin, Georgetown, Princeton and Stanford advanced out of the heats in the Lightweight Eights, and will be joined by reps advancers Radcliffe and Bucknell. The times out of the heats were fairly close among the top four, so this is shaping up to be another great race.

In the Lightweight Women's Fours, Bucknell, Radcliffe, Wisconsin and surprise crew Loyola of Maryland advanced directly to tomorrow's finals, with Stanford and Georgetown joining them via the rep.

And if today's racing wasn't serious enough for you, racing for medals and 2010 national titles will start promptly at 7:48am tomorrow. On to the finals! 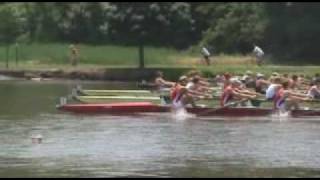 2010 IRA Varsity 8+ Semifinals
On-course video from the semifinals in the Men's Varsity Eight at the 2010 IRA National Championship Regatta in Camden, NJ. Semi #1 saw Washington, Cal and Syracuse advance, while semi #2 saw Harvard, Brown and Cornell move on to the final. (row2k.com)
back to top
IRA Regatta Features