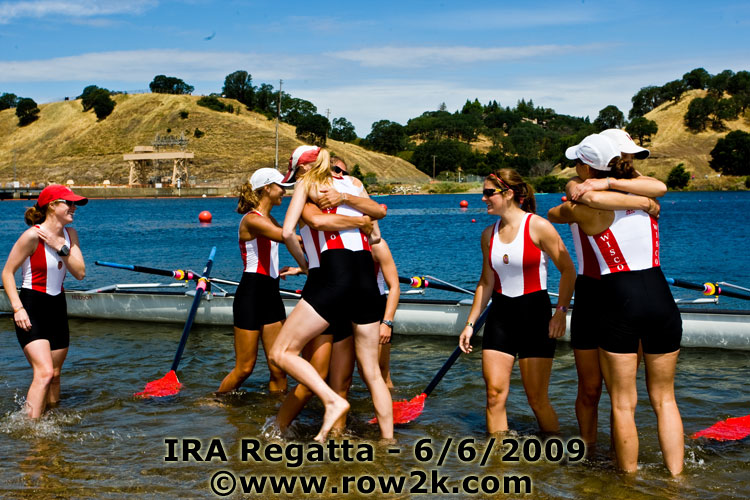 The Wisconsin Lightweights are favored in Camden

With the Wisconsin Badgers claiming their sixth consecutive Eastern Sprints title, and lining up on Lake Natoma as two-time winners of the National Championships, and 5 of the last 6 titles, most folks would be forgiven for putting the Badgers up as early favorites to repeat. Yet with some definite growth in the lightweight women's ranks in recent years, the rowers and coaches at UW themselves would be the first to tell you that they take nothing for granted.

"If you look at the results from the last three years, everybody has been competitive," said Wisconsin head coach Erik Miller. Perhaps the only thing missing from Wisconsin's resume is a fuller racing schedule this spring. "Our training been fine this spring, and we have not had as many races this spring as previous years due to the late timing of our spring break," said Miller. "The team has had good rows and bad rows, so we try to learn from the things that don't go as well, and hold onto the things that do go well."

Looking to make a dent in Wisconsin's dominance is Stanford, who enter the regatta as the #2 seed after a solid regular season, including a competitive race against Wisconsin early in the season. "Our effort in our first race versus Wisconsin really stands out," said Stanford's head coach Al Acosta. "We basically took a big hit at 750 and didn't respond. The crew learned a lot from that race and has become more resilient and determined since then."

Trailing Wisconsin by just a sliver of open water at the Eastern Sprints was Princeton, who raced Wisconsin as tight as anyone has this season. Look for Princeton and Stanford to wage a good battle against each other as they also look to push Wisconsin down the course.

While Stanford had no real opposition on the west coast, the field at Eastern Sprints was quite a bit closer, with Radcliffe, Georgetown, Bucknell and MIT all chasing Wisconsin and Princeton. Sprints bronze-medallists Radcliffe saw a great gain in speed late in the season, and may also be a crew to figure in the medals picture at IRAs.

"Sprints was a good race for us," said Radcliffe's coach Heather Cartwright. "It's nice to get that 4th place monkey off our backs, but we know everyone will be fast at IRA's and we are all only separated by a few seconds either way."

Certainly exposure to all of the players in the field hasn't hurt, as just about all of the eight crews entered in the Lightweight Women's Eight at the 108th IRA have seen each other on a racecourse during the regular season. Both Wisconsin and Princeton made a west-coast swing, where they raced against Stanford, while Stanford and Wisconsin in turn headed east to race against Radcliffe and MIT.

"We certainly felt that racing against 8 of the top 10 ranked crews helped us prepare for the championship season," said Radcliffe's Cartwright. "We have been very fortunate to host Wisconsin and Stanford in particular. They are very fast and preparing for them, and racing them, have elevated our game."

In addition to some good crossover racing during the regular season, the eight invited teams must all feel they know each other--the Lightweight Women's field in the 108th IRA is the same as it was last year. Rounding out the field along with the six Eastern Sprints finalists and Stanford are SIRA Champions Tulsa.

Radcliffe's Cartwright concurred. "Having those extra rowers contesting for the eight really amps up the intensity of our practices. It's also great to give more athletes exposure to IRA's, especially because we have a big team this year and it is fun to keep them going into the post season."

Loyola of Maryland joins Stanford and the six eastern schools in that eight boat field.

Open Men: All Huskies?
Get our Newsletter!
Enter your email address to receive our updates!