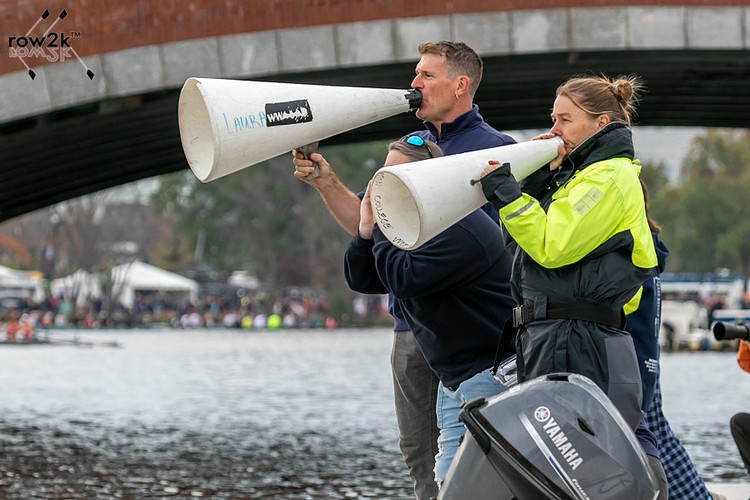 A veritable omnibus of Notes from the Course to get you all caught up...here are all the tid-bits fit to print (and that we could get typed up on the drive home):

How's Your Ukrainian? - As the crews from Ukraine powered up for the start of the Men's and Women's Champ Eights, Seth Bauer delivered, in perfect Ukrainian, "You are all Heroes" over the loudspeakers at the start. We think the Berlitz courses paid off. 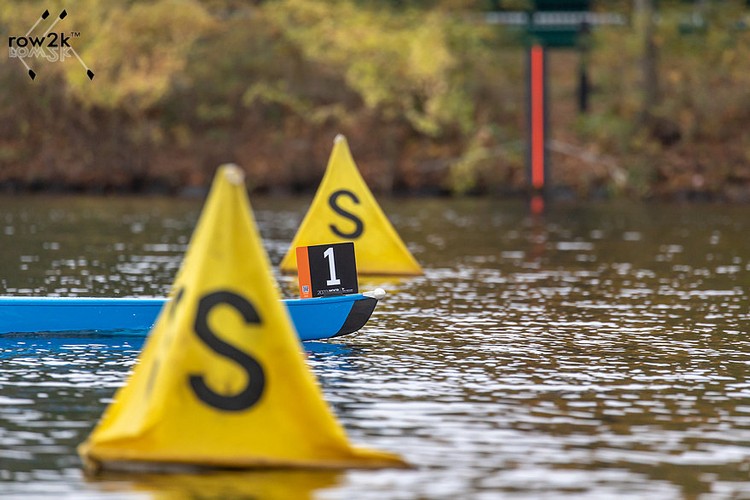 Tons of Titles, A Course Record, But No Bike - The bike thieves of Cambridge have no sense of timing, or a great sense of irony: Gevvie Stone awoke on Saturday to find her bike stolen, so she had to drive to CBC to win her umpteenth Charles on Saturday...and then go bike shopping.

Ah, So That's What Happened - We spotted a CBA crew rowing back missing a blade off the 4 seat's oar...and then found the moment of impact in our photos when we got back to the office: 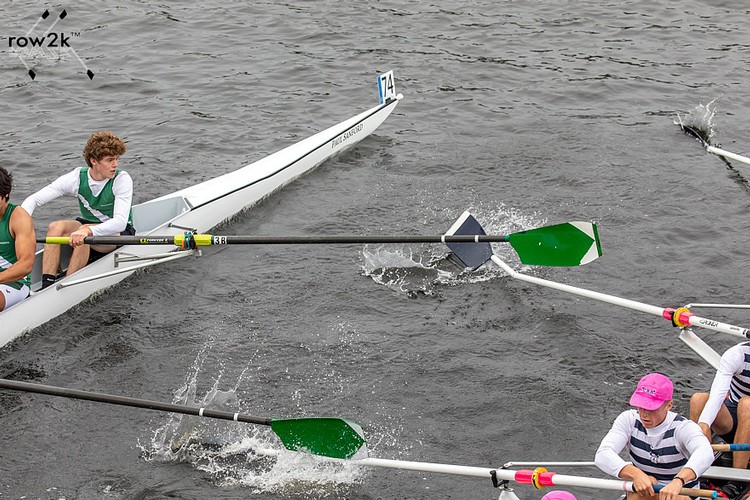 Got Map, Can Race - row2k spotted a lot of single scullers with a map of the course taped to the deck of their boat. Sure beats getting lost out there, we guess.

Front Row 'Seats' - Getting a good spot on the bridges is serious business, and we spotted parents getting there a full hour and half early to nab a spot for the big junior races-and, with 90 eights/810 athletes in the Youth events, that was a whole lot of parents who wanted to be in just the right spot on Eliot or Anderson.

Eliot Always Wins - Eliot Bridge always comes out ahead in every brush with crews that just misjudge the turn, and there were some doozies today, to include one eight snapping an oar in the process. No wonder the undefeated bridge now reportedly has its own Instagram account to brag about its wins. 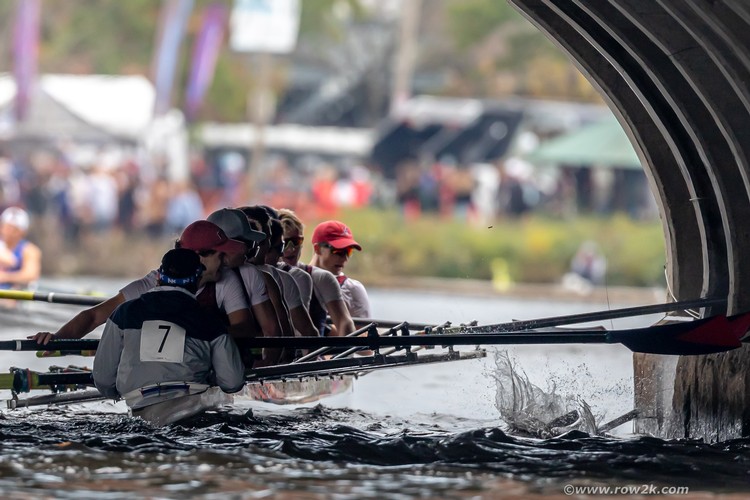 Crash of the Day, Perhaps? - One Youth Women's Eight crew coming through Eliot caught the crew ahead at its six seat and proceeded to push both crews--by continuing to row--way off the course. By the time they separated, they were both in the warm-up lanes along the Boston shore. 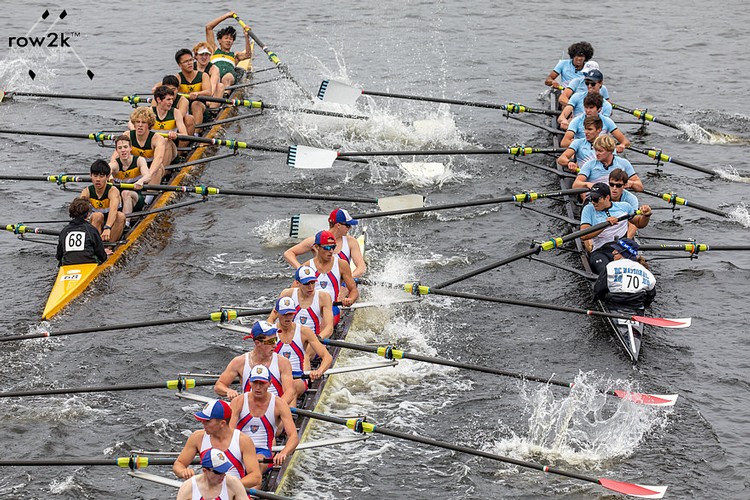 Not at Beach Sprints Anymore - row2k saw Beach Sprints medalist Annalise Hahl after her return to flat water racing, where she took 11th in the Youth Four. How did it feel to launch from an actual dock again, we asked: "It was awesome," she laughed.

Feet Up - When an eight buzzed the corner of the Belmont Hill/Winsor boathouse on Sunday afternoon, the row2k photographer stationed there laid back and lifted his feet to allow the blade to go right under, then snapped photos of the crew racing away; the five-man in the boat was yelling "NICE!!! NICE!!" in appreciation.

Check Your Rental - Lots of crews rent shells here, especially the composite Masters and Executive Director crews that are rarely all from one club...but you have to check the shells over pretty carefully to make sure all is in order. One Quad, wanting a shell with no rudder, went out today with the rental's steering toe zip-tied down, only to realize on the water that the shell was steering to port, and they just had to deal with it the whole way.

Guardians of the National Team - Halloween came to the Charles early, with this batch of Olympians, National Teamers, and other boatmovers took a spin in the Director's Challenge Eight. Coxswain's best call of the piece? "I am GROOT!"

The crew also had a speaker on the bow through which 'Come and Get Your Love' was playing, at least for the last half mile of the course. 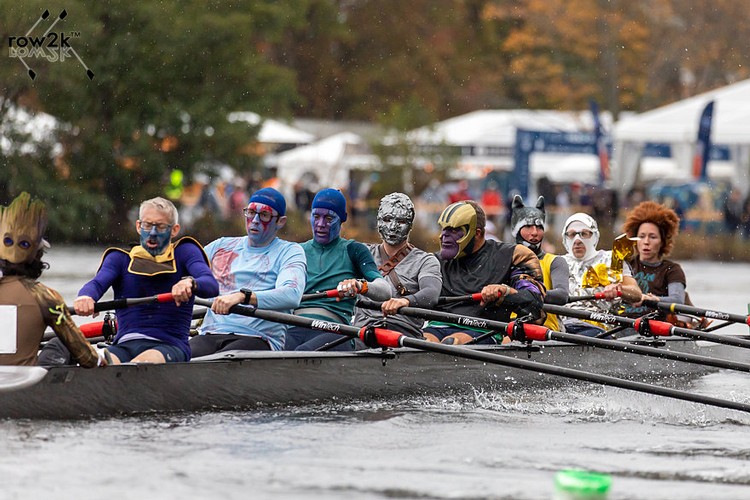 The Young'uns Are Coming - In among the special U17 medals awarded to the younger athletes in the Youth events were some notable names: Olivia Petri, the USA's U19 sculler last summer, in the Youth Single--who took second and nearly caught Catherine Barry to win the whole race--and Lillian Auth, daughter of 1996 Olympian Tom Auth, who won the U17 Double medal with Teagan Farley.

Some Trophies on the Side - Not every trophy awarded in Boston belongs to the HOCR folks: the St. Joe's Prep crew was spotted with the cup that goes to the top Jesuit high school finisher in the Youth 8. The Prep has held onto it since 2019, when they won it back from Gonzaga, who was the second fastest Jesuit school today.

Octogenerian Eight - The final crew down the course after three days of racing was the Octogenerian eight: all 80+ apart from the 79 year-old youngster at stroke--Peter McGowan--and the crew was coxed by the oldest of the bunch: 86 year-old Bill Becklean, a 1956 Olympic Gold medalist. Watch a video about the crew here. 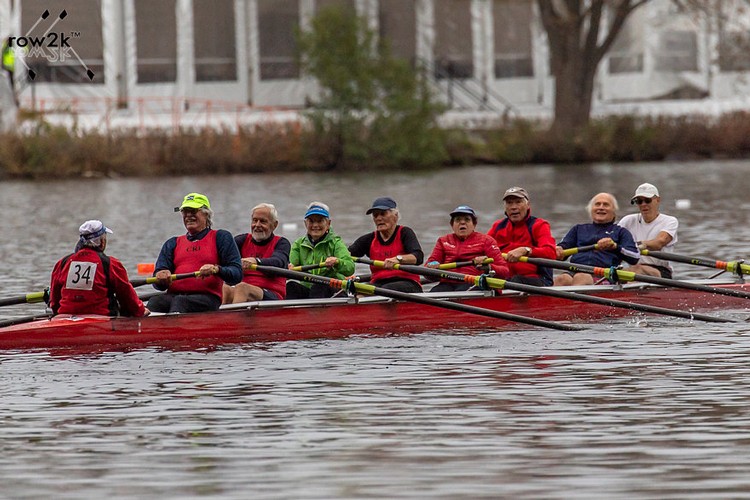 Extra Special Medal Ceremony - Avery Packard, who won the Youth Women's Double with CBC boatmate PJ Balazy, had the chance to get her medal from her dad, Alexander Packard, who just happened to be volunteering at the Awards Tent at exactly the right time.

Doubling Up Your Wins - More than a few "doubles" across men's and women's events in the same categories this year: Harvard and Radliffe Lights took the two light eights back to the now temporarily shared Newell Boathouse; Oak Neck won both Youth Singles; and University of British Columbia won both Light Fours, prompting some visitors from up north to wonder if they might see a row2k headline along the lines of "Canadian Lighties Strike Fear into Hearts of America with Sweep" we can't seem to find that link, let us know if you see it and we'll link! 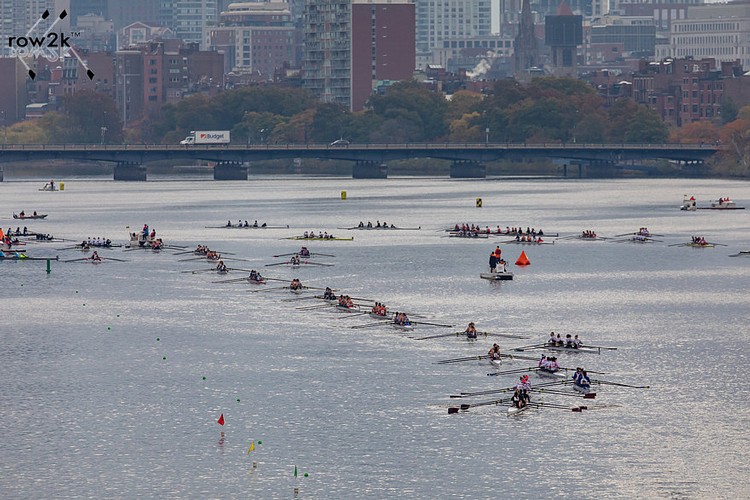 Take The Open Lane, Right? - Late in the day, one car crossing Eliot Bridge decided that the "closed for pedestrians lane" was just meant just for her...and had to be flagged down by the State Police and be told it was not, in fact, open for her personal use. Former coxswain who couldn't pass up an open line, perhaps?

Things You Notice in the Media Room - Working in the cave-like Media Center in the Cambridge Boathouse, you spot some things, like the disco ball hanging from the ceiling (that we think should be lit to announce decisions from the Ombudsman); the Journo Hack of scavenging desk lamps in the dimly lit space; and that CBC has a tiny elf door leading to the adjacent boat bay. 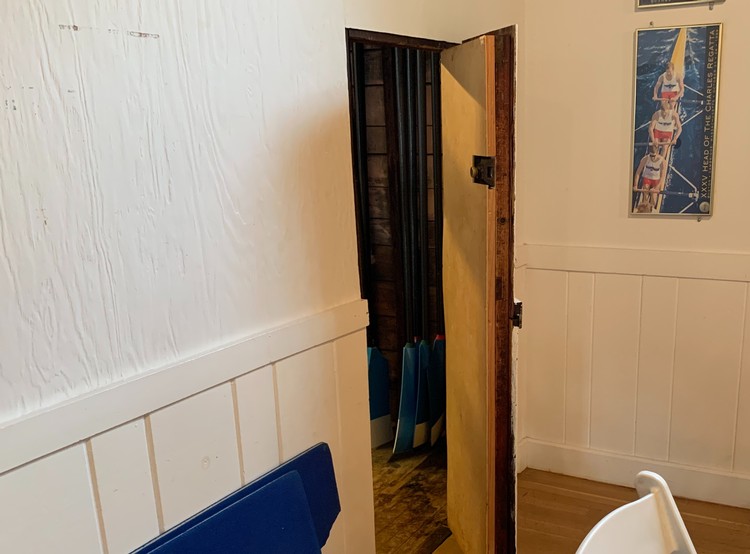 Sign of A Good Party - Reports say that the empty beer can situation after the full Saturday of day drinking in the Beer Garden was distractingly epic along the banks. Place looked good by Sunday morning though, well done to the cleanup crews.

Most Canadian thing ever? - A red and white Tim Horton's umbrella? Possibly.

That "Hey, I took That Photo" Feeling - That's the one you get when you are the row2k photographer flying home out of Logan and you pass your shot on the way to your gate: 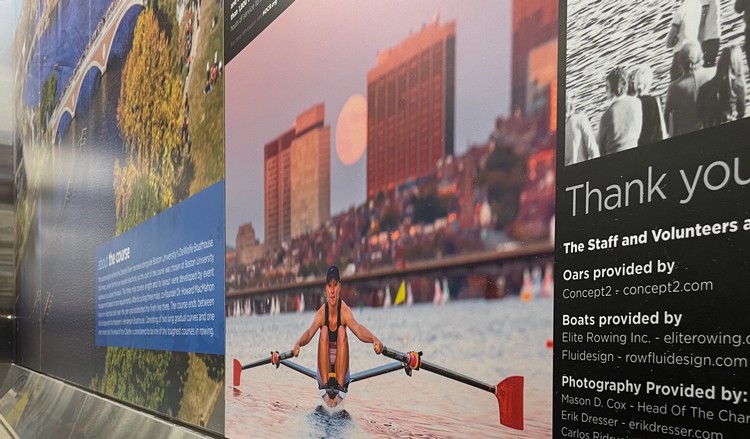 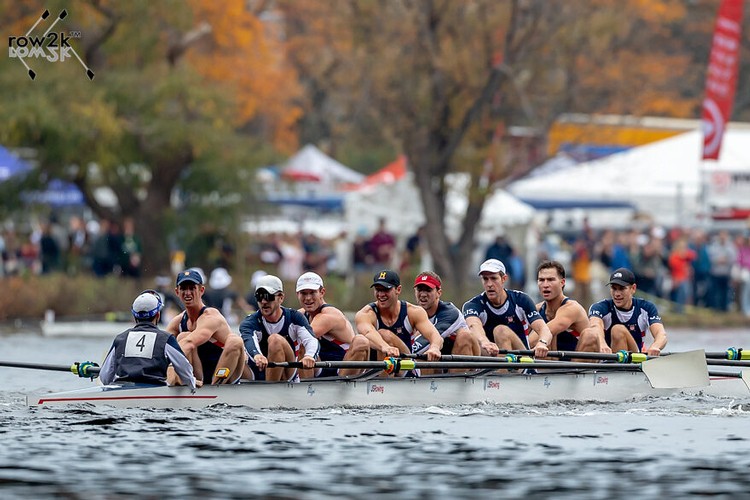 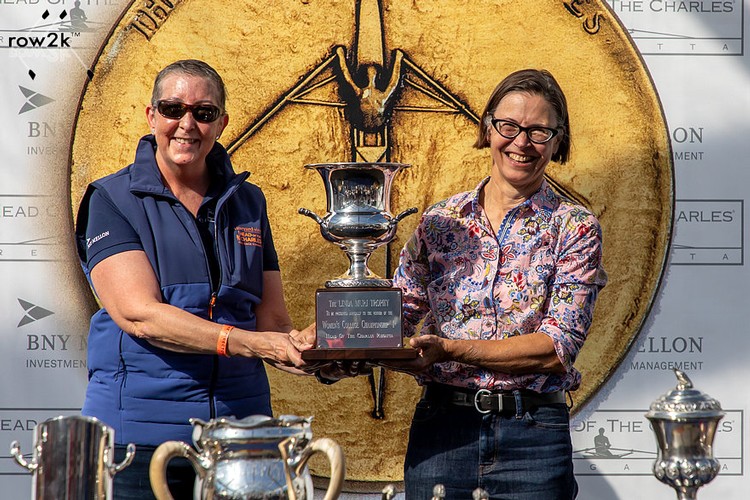 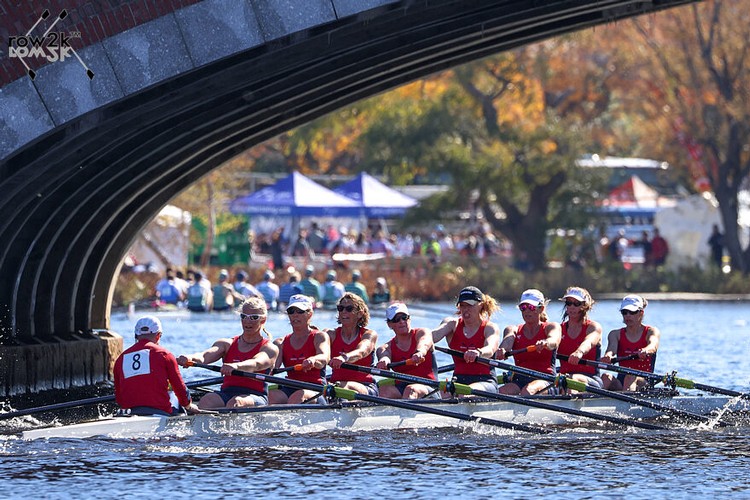 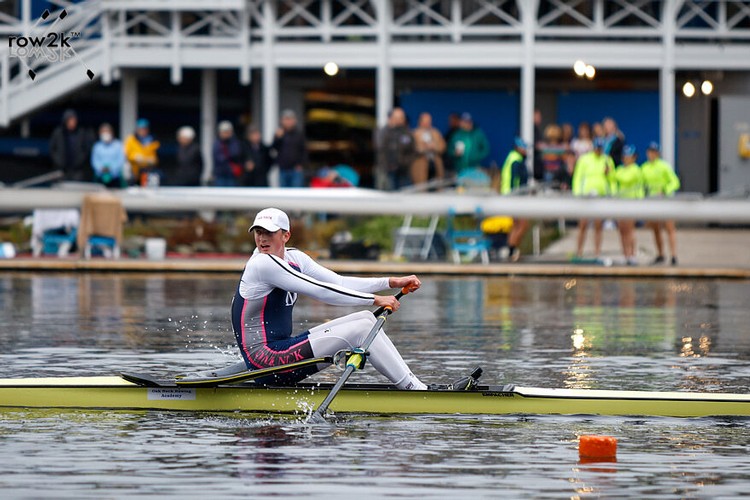