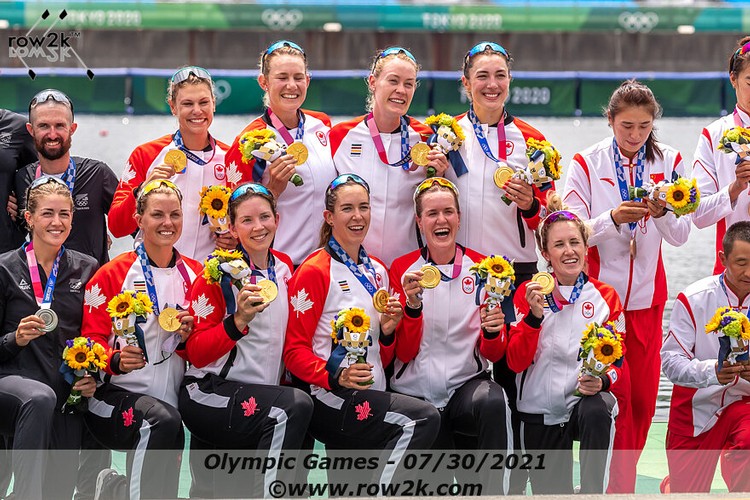 CAN W8+ on podium in Tokyo

COVID-19 has rendered the normally rich international field in the Head of the Charles practically non-existent in 2021. Yet the one international crew that will make it through customs and to the start line may be the most appealing one of all.

Canada will bring its gold-medal women's boat to the championship eights race on Sunday, nearly intact from Tokyo; seven of the nine gold medalists will race in Boston. The Canadians led wire to wire in winning Olympic gold, holding off late surges from silver and bronze medalists New Zealand and China, and stopping the fourth-place Americans Olympic win streak at three. In the months since crossing the Tokyo finish line, the women are still getting their arms around what they have done.

"It's very surreal," said Christine Roper, an 11-year veteran of the Canadian national team. "I think obviously as a little kid in sport and then being on the national team for however many years you've been on it, [Olympic gold] was always the target of what we're aiming for as far as the ultimate goal. So to finally get it, it feels really good to have all of our hard work pay off, but also hard to wrap your head around at the same time because we've been working on it for so long and now that it's happened it's almost like, 'wait what? This is actually real?"

The women are finding that their gold medal is a triumph they share with all of Canada.

"To see how much support we had from everybody in the country, it's just really special," Roper said. "I think you're not only representing yourself but any rower in Canada and then on top of that, Canadian citizens as a whole so I don't think that that privilege is lost on us. I think we're very aware of how special the experience was and just feeling the love of everyone at home is so impactful and if this just helps to inspire future young kids to try sports or get involved with the Olympics I think that's the bigger win, what it will do for future generations."

The Head of the Charles will serve as a sort of reunion for the team after they all went their separate ways within a day of winning gold. While Roper acknowledges that it would have been special to celebrate more at the Olympic Village, what the team most wanted after the race was to see their loved ones again. Something that some of them hadn't been able to do for the previous year while training.

"After winning, at that point it had just been such a long year and long five years but the year leading up to the Olympics, especially, and everybody I think at that point was just really eager to get back home and see our loved ones who most of us couldn't see because of COVID and training," Roper said. "I think it was a shame that we had to leave early, but that was like a blessing in disguise because we just got to see our families sooner, which is really what everybody just wanted to do." 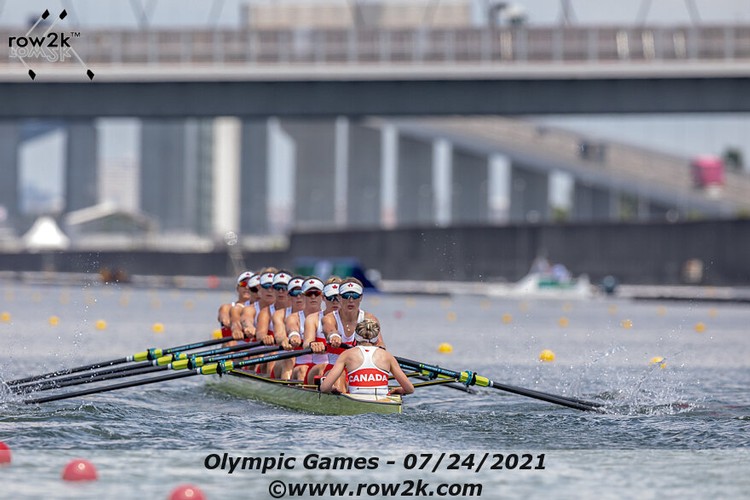 Roper has rowed in the Head of the Charles a half dozen times, both with the Canadian national team and while an undergraduate at the University of Virginia. But no one in the Canadian boat knows the Charles River as well as Madison Mailey, who rowed collegiately at Northeastern from 2015-2019.

"[The Head] was always a highlight of my rowing career when I was in Boston because the whole city lights up over the sport of rowing," Mailey said. "It's so special to have a weekend that is so loved by Bostonians and by people in New England. You always felt the energy of everyone wanting to have fun."

This will be the seventh Head of the Charles for Mailey and her first since 2018. She raced her first when she was in high school, and it was that first race that led her, almost accidently, to Northeastern.

"During that first regatta weekend, I went to Tufts, and I was talking to the coach and he said, 'you need to talk to [Northeastern coach] Joe [Willhelm], he'd really like you,'" Mailey said. "So I then met Joe and then I fell in love with Northeastern. It's just got such a sense of home and the people are pretty awesome. The program is incredible. I don't know if things would have happened the same way in my life if I hadn't gone to the Charles that year, I wouldn't have gone to Northeastern. It's funny how things work out or things happen and it's funny to have the Charles be a part of that story."

And the Charles will continue to be a part of her story, whether she be here in person in the years ahead or not. For on Saturday of regatta weekend, Mailey will return to the Northeastern boathouse, where the school is set to christen a new shell in her honor.