Stephen Harris was definitely dressed for a damp, chilly row on the Charles River Sunday morning. And being from Guelph, Ontario, it's not like cold weather is new to him.

But even with two layers of racing clothes, including a warm long sleeve shirt, and a base pants layer, under his racing unisuit, Harris found himself shivering after warming up in the basin and waiting to line up for the start of his race in the men's youth single Sunday at the 54th Head of the Charles Regatta in Boston.

"It was a little cold at the start," Harris said. "It was raining and windy when we got up there, and I was actually shivering." Still, it did not take long for Harris to shake the chill. Racing to a top three finish at the Head of the Charles is hard work, especially given the always changing weather and conditions. 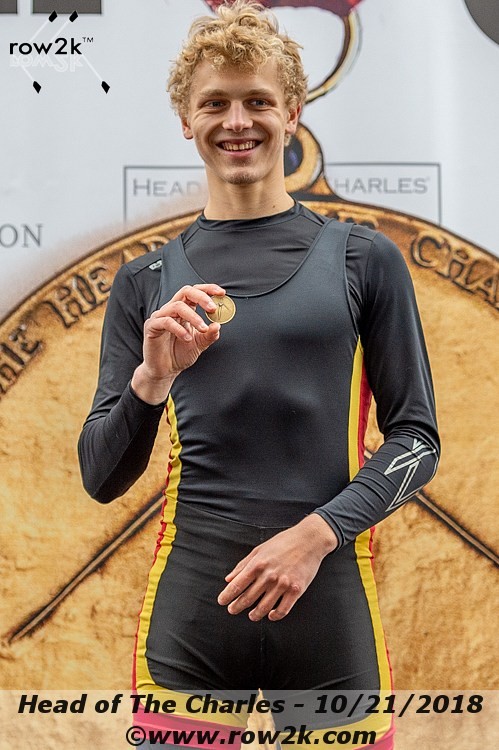 Harris with his medal.

On any given HOCR weekend, the reputation of New England's fickle and quickly changing weather is amplified on a course as unique as the one in Boston, where over a three-mile stretch, it ranges from wide expanses of open water, to narrow tight sections while twisting and turning through seven bridges. The constant change of directions also means a constant change in the direction of the wind and its effect on the racers.

So, it was not unusual that at the end of his morning, when he was in the awards tent picking up his third-place medal, his recollection of the race was of one that started in a cold and wet head wind and ended with a tail wind, with intense sprint to the finish - but one that was also lot of fun to be in.

"The conditions were kind of interesting," Harris said. "It started as a head wind, and then turned into a tail wind in the last 750, so that makes for a good sprint to finish it off. Rowing here is so much fun," said Harris who was racing the Charles for just his second time.

"I love it. I love how there are so many people here that enjoy rowing. I come from a club that has just a few people, I'm the only junior. So, having everyone here appreciating the sport is just awesome."

And that is pretty much the way most Head of the Charles weekends go. The racing is always tricky and hard, and the weather, and the size of the crowds that come to line the banks of the river in the hundreds of thousands, always make the experience worth remembering.

Some weekends the weather is warm and favorable for breaking records, like it was last year, sometimes it's wet and raining and cold and windy. And some weekends, most or part of all of those conditions can be wrapped into the various hours of the two-day event - like it was this Saturday and Sunday.

For Saturday and the first 35 events, the majority of which are masters events with six championship races at the end, it was a warm, dry and mostly sun filled day. There were winds, but nothing that either pushed rowers towards new records, or made the rowing more than just slightly and bumpy and wavy in spots.

And for Sunday - a day that had mostly youth crews taking their turns in the first hours, along with a mix of collegiate and club events and four more championships races (men's and women's fours and eights) in the afternoon, it was a cold, windy challenging day. 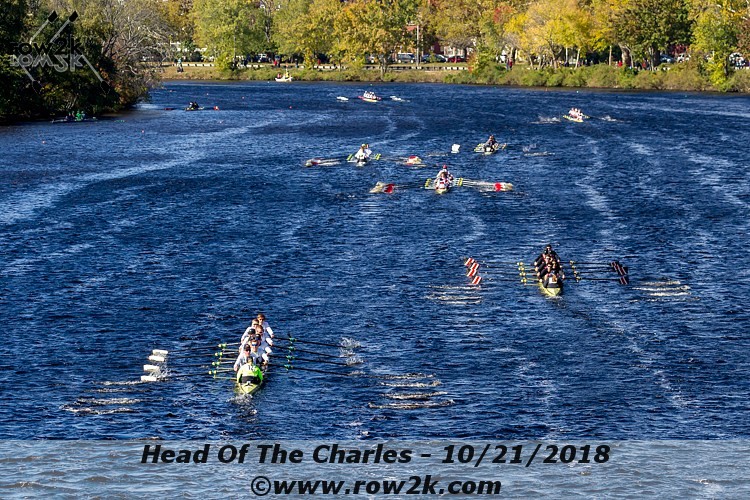 Eights racing through the long turn in the wind.

And they got to do it in front of typically huge crowds, who were bundled up and rain protected, but out in force just the same.

Among the many crews that notched their names this weekend into the annals of Head of the Charles winners, some of the highlights included women's sculler Gevvie Stone's ninth singles title Saturday, and from Sunday there were several others.

The Saugatuck women's youth eight won for the fifth consecutive year and the RowAmerica Rye men's youth eight, won their relatively new organization's first youth eight title. Also taking time in the spotlight were the US men's and women's eights that each won Championship Eights titles.

While a win in any of the 10 youth events is a big deal for the club and high school athletes that enter them, having a crew win five years in a row is an even bigger deal, particularly in the youth eights divisions.

Both the men's and women's youth eights are the largest subscribed events in the regatta, with 85 entries each. 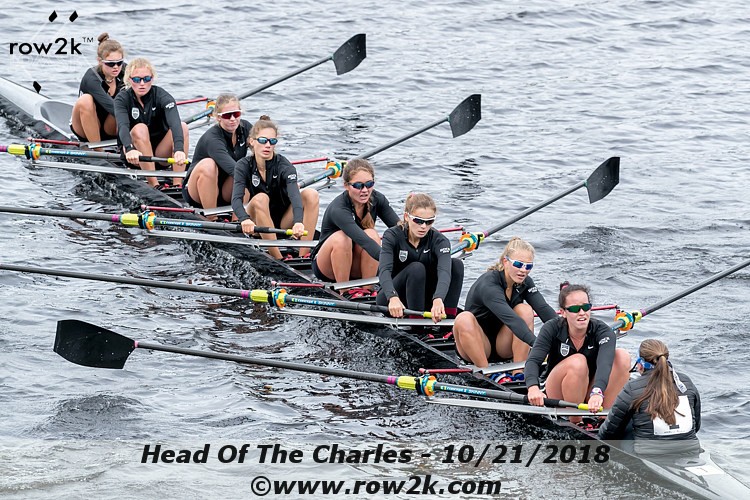 "This was a really cool experience," said Saugatuck's three-seat Justine McGuire. "We were really excited to five-peat. I was in the boat last year too, so this was an exciting experience. It was definitely windy, but everybody trusted everyone else in the boat which was the most important part," she said.

"We were just excited to get on the course and do everything we have been training to do. It was hard in some points, like under the bridges, I would be lying if I said it wasn't. Anderson was one of them, but we knuckled down.

"The wind picked up and it got difficult, but we had the stroke call out to us to pick up the rate and we just started to pull away."

For RowAmerica Rye, a program begun just six years ago, winning the men's youth eight was a statement. The program has had success in Boston - the women's youth four won here last year - but this was the first win for the club in an eight. 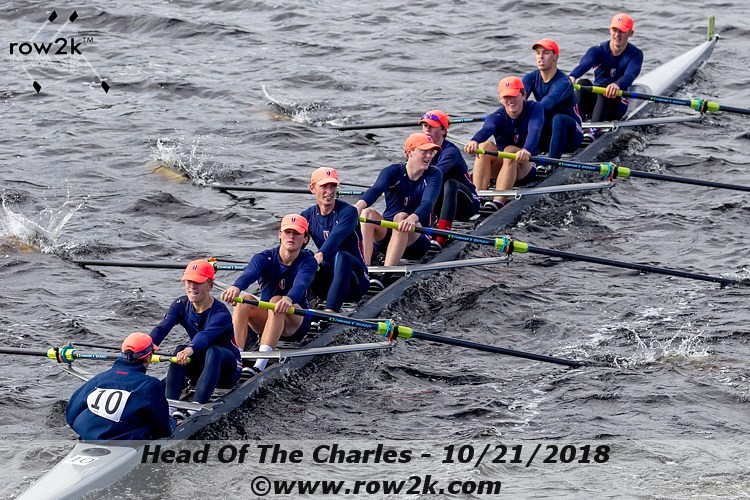 "None of us have won here before," said rower Dan Mackle. "It feels good. Being here is always a good time and we brought a lot more people up here this year and we've done well this season. So, we were optimistic.

"We were confident, but we didn't expect this. We started 10th and we passed three boats - Saugatuck, Marin and Greenwich. Going through Eliot was a really good feeling, we had a lot of people cheering for us on the sidelines.

"It was windy and there were a lot of random gusts. But we had good passes, so there were not any tight turns."

Following those events were the men's and women's championship eights, which are key races for the large collegiate programs, and are often opportunities for those crews to race against national team lineups and combination all-star boats made of up of scullers, or "Great Eights."

The men's first eight was the same crew that finished fourth in the World Championships in Plovdiv, Bulgaria this summer, and were eager to row again together. The US eight notched a win in the eight in the SH Netz Cup in Germany just after Plovdiv, but it was not the complete crew. 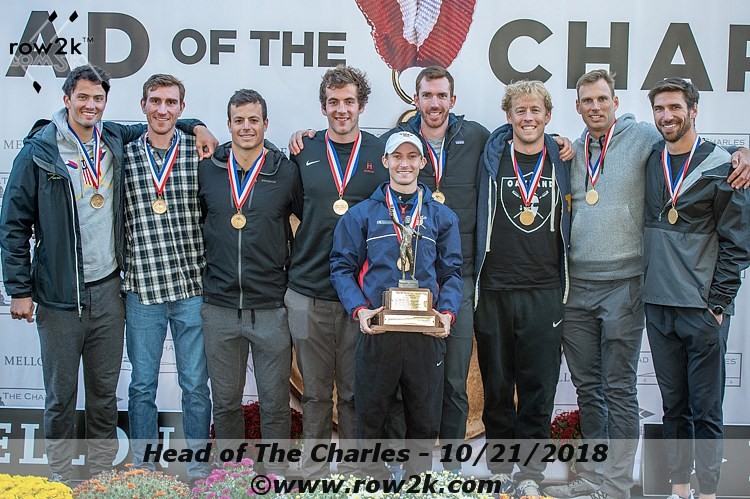 US men's champ eight on the awards stage

Head men's coach Mike Teti said the many of the crew have been away from the Oakland Training Center and training in different parts of the country for the fall, but they told him they wanted to race, arranged to borrow a boat from Harvard University, and came together in Boston last week to train and prepare.

"It was good," said Teti. "They decided they wanted to row in the Charles and they wanted to do it together as a boat. They were in different locations and I give them all the credit. They got the boat, called Harvard and talked to (men's coach Charlie Butt) to arrange that. And they came in last week and got in a couple of rows.

The crew was also happy with the result. "There were pretty tough conditions out there," said Tom Dethlefs. "But we did what we had to do, which was dig in and drive the whole way." The US started fourth behind defending champion University of California, which was followed by Yale, and the German entry, DRV Dortmund.

"We had a fast German boat in front of us and we just kind of focused on them and dug in and tried to row them down. We caught them somewhere around Newell and kept going. It was good to get the crew back together and wind things up again. Now, we will get back to training and get ready for next year.

"The pre-Olympic year is really important," he said. "We have to qualify the eight, qualify the four, qualify the pair, and make sure we have all those spots for the 2020 Olympics. The coming months are critical for how we will define the quadrennial."

Unlike the men, the US women are the defending Olympic and world champions, and did not row the same lineups they rowed in Plovdiv.

"I think we did a really good job just trying to keep on keeping on," said Felice Mueller, who was in the eight that won worlds in Plovdiv. She also rowed in the women's single Sunday and finished sixth.

"It was definitely a painful race," Mueller said. "It was fine for the first 10 strokes and then with the headwind, we really started to feel it," she said. "My arms got very tired, but it was incredible. The eight is a really cool boat and these college programs just keep getting better and better.

"So, to come out here and win in the eight is a really special thing to do." 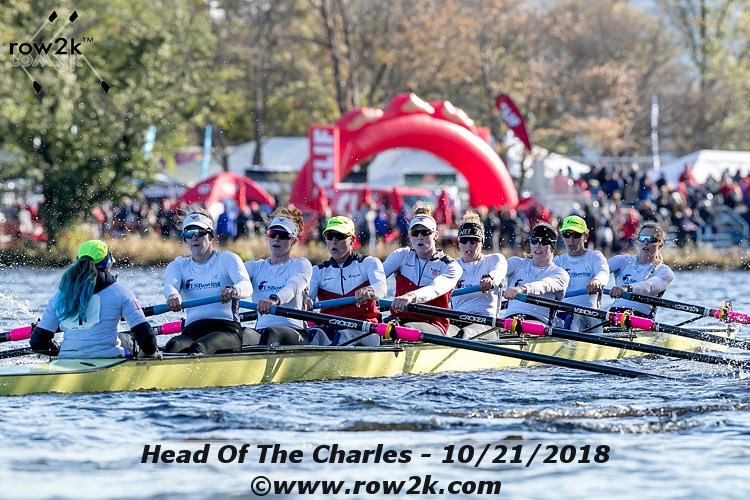 The addition of the Director's Challenge Eights opened opportunities for an interesting mix of crews and crew names, like the Friends of WPI "Whoopie Pies" and Potomac's entry "Came Back Haunted," or the entry from Club Nautico De San Juan named, "Frozen is Chosen,"

When it comes to bringing in a team of ringers, one Cambridge Boat Club entry went all in and had a few Brit stars get on a flight to Boston Saturday to row in their entry "Bishop C."

Bishop C is Cath Bishop who won silver in the pair in 2004 with the five-time Olympian Katherine Grainger. Also in that boat was American Olympian Charlie Hamlin, who survived a near fatal heart attack in July and rowed two events this weekend.

There were a number of impressive clashes and crashes Sunday, as there always are when the big boats race. But check out this bow into the bridge action. 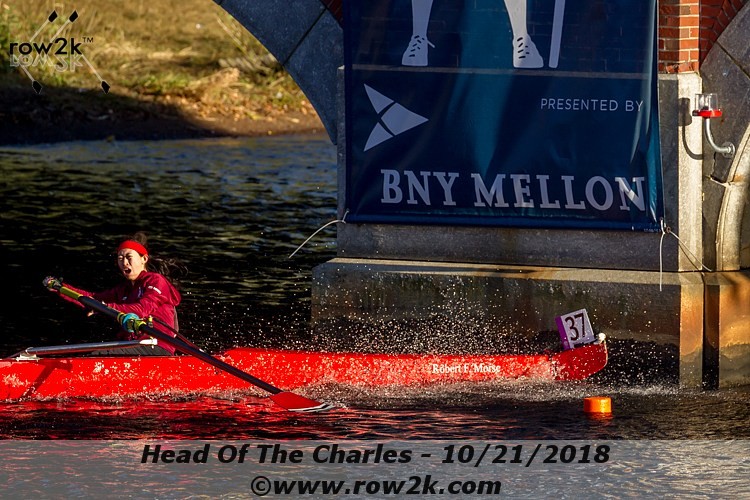 Just being polite: In the women's championship singles race Saturday, the leading women caught up to the tail end of the men's lightweight race. Stone passed three, including one that hindered both Kara Kohler and Mueller, who were racing closely together. There was some contact between the crews, and the sculler flipped.

"I yelled sorry as I passed him," Mueller said.