Gevvie Stone does not hesitate to say she has certain advantages when it comes to racing the Head of the Charles - the biggest being she grew up rowing on the notoriously difficult Boston course, just like her parents did.

The experience gained by training on the same water, having generational knowledge passed down by her coach dad, dealing with the same kind of changing weather conditions common to the Charles, and navigating through the same seven bridges most days of the week for years is something that Stone has turned to her advantage - and led to her unprecedented success in the women's championship single.

But that does not mean that just rowing the Charles everyday translates into easy wins. Stone makes a point of being ready for this race every year, no matter what else is going on in her life.

Last year, Stone, who won silver in the single at the 2016 Olympics, set the regatta record for the most wins in the women's single, and did it during a season she had taken off from international racing to complete her medical training and residency.

"Last year was tough, working a string of nights right up to the race and feeling out of shape. And so, it was a tough race for me, mentally and physically," Stone said. But, still, she won and earned the right to start first in her division again this year, which makes running a smooth line down the home course even easier.

So while even Stone will say without hesitation, "this is not a fair race", that starting first and knowing the course the way she does gives her advantages, her wins are not gimmies.

And Saturday, with bow marker number one fixed to her yellow single shell, the hometown girl rowed the hometown course in front of her family and friends, ran down three of the Championship Lightweight Men's Singles competitors who started in the event before hers, and notched her ninth Head of the Charles singles title.

"It was so much fun to go out and race fully prepared," said Stone, who is back to full-time training with the 2020 Olympics in mind. "It's fun to race on my home course, it's fun to have the Charles River to row on, and have all the competitors come here. And it's fun to come out here and lay it down, and to pass by all of the people who are here cheering for me because they know me."

And there were certainly a lot of people lining both sides of the banks of the Charles River for the 54th Head of the Charles. What was predicted to be a day of cool temperatures and wind, with a possibility of showers, turned out completely different. 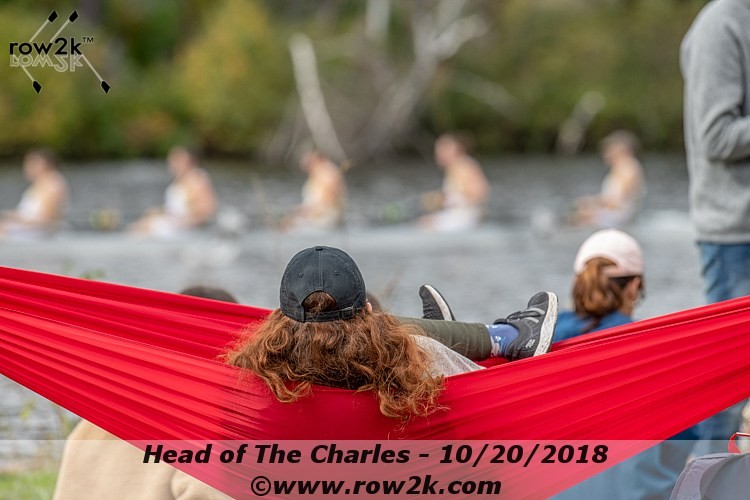 Fan enjoying the weather and the racing

There was some wind when the first day of the two-day weekend event got going at 7:45 AM Saturday morning, but it settled down as the day went on and by afternoon, the skies were clear and blue and the crowds swelled in reaction.

In all, 35 of the regatta's 63 events were run without incident or interruption - save for the usual consequences of having rowers of all different levels of skill and experience rowing against the clock in 10-second intervals, which means bridge and boat crashes and boats flipped over. 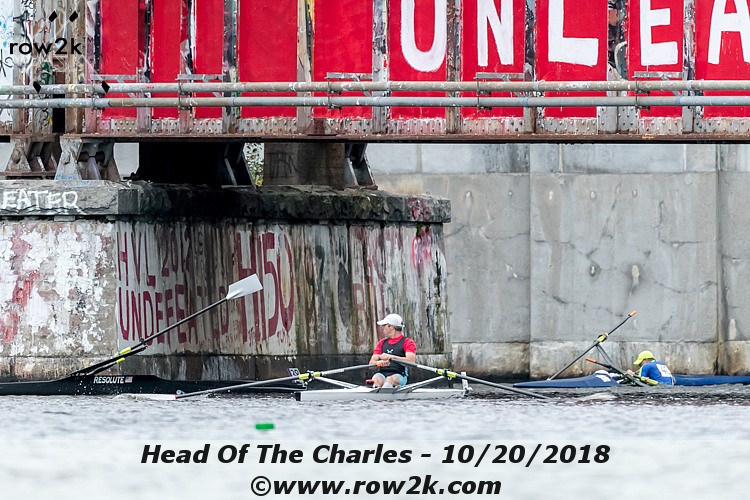 Stone's race was a good example of that separation of skill and fitness. She not only caught up and passed three of the lightweight men in the event before hers, one of those rowers slowed down two of Stone top competitors, American's Kara Kohler and Felice Mueller.

"When I saw the lightweight guys, I actually had someone to chase and it made it much more fun for me," Stone said. "Unfortunately, there was one that yielded to me, but as Kara (Kohler) and Felice (Mueller) caught him, he went swimming and they had to slow down because of it, which stinks because you want your competitors to have their best races too."

By the end of the day, medals and trophies were won by athletes and crews that ranged in age categories of Senior Veterans I and II (60-69 and 70 and above) - all the way through the rest of the masters age groups and club, alumni, and inclusion crews, to the six championship events that included the men's and women's open and lightweight singles divisions and the men's and women's doubles, all of which were packed with elite talent and crews from around the world.

And while Stone points to the experience and advantages gained by training on the Charles every day, an unavoidable truth of racing the Head of the Charles, the men's single was not won by a home-grown son of the Charles.

While Andrew Campbell Jr, a lightweight single sculler rowing in the open weight event who has been rowing in Boston and has been a member of the regatta host Cambridge Boat Club since he was a freshman at Harvard University almost eight years ago, came close and finished second, it was University of Washington senior Ben Davison of Inverness, Florida, who won the men's championship single title. 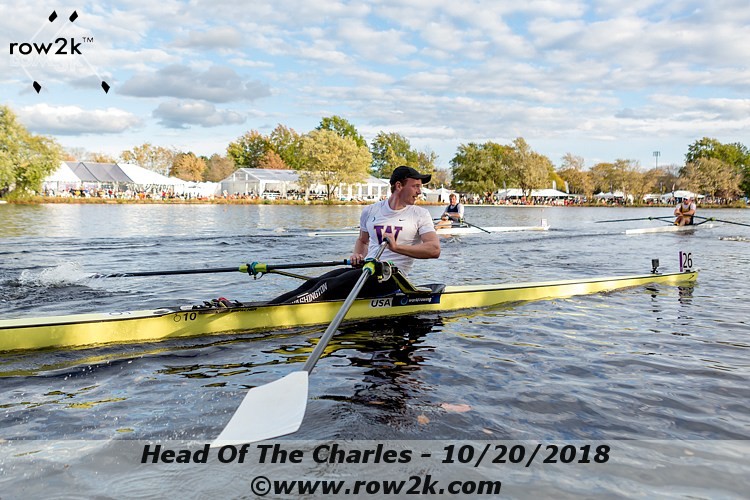 Davison, who started 26th, powered through a field of seriously good US and international single sculling specialists, including the 2016 gold and silver medalist - New Zealand's Mahe Drysdale and Damir Martin of Croatia - who together rowed to a near dead heat at the Rio Games, and finished just under five-seconds ahead of Campbell.

For Davison, the win was a bit of a personal redemption for a summer of international racing that did not go the way he had hoped when it began. Davison finished out of the medals in the single in the World Rowing Under 23 Championships, and then finished 14th in the double at the world Championships with partner John Graves.

"This was huge for me," Davison said. "My parents were here for it and it's just been a tough year. The result in under 23 and the result at seniors just starts to wear you down. So that just makes these moments really, really special."

Davison had a choice to either row with his University of Washington teammates in the eight or to row the single. Washington coach Mike Callahan gave Davison the choice to do either and was thrilled to have watched the win.

"That was very exciting for Ben," Callahan said. "It was a long time coming for him. He needed a statement row and that was one of them. He's an exceptional talent and person. He has the kind of work ethic of anyone I have ever been around before, so that was a good one for him."

"When he came off of the World Championships I asked him if he wanted to integrate back into the group or row the single," Callahan said. "We entered him in the single in the summer and I talked to him and gave him the option and the chance to think about it over a weekend and he decided to row the single."

When Davison came off the water and carried his single back to the Washington trailer, he was surrounded by his teammates. By Tuesday, Davison will be back among them. And he is looking forward to it.

"I was glad to come here and put up a good result before the (eight) goes tomorrow," he said. "I'll be back with them racing in pairs by next week, and it's going to be fun. The race today was a little bumpy, but I've been rowing on Lake Washington for the last two weeks and it's been really bad out there.

"This was beautiful for me and it helped me today, not looking for flat water and just being OK with rolling around. There was all kinds of different wind out there - headwind, tailwind - and I just stayed on top of it and kept it moving.

"I had a sense that the guy in front of me was fast, and I just thought if I could slowly start to inch up and close the gap on him I could do a decent time. But I really had no idea how fast I was going.

"I didn't know the result until I came across the line and coach yelled at me and gave me a thumbs up and a one. But there were obviously more results to come through so I really didn't know until I came back to the dock."

Notes From the Course
-Bridge trouble of a different kind: The Princeton lightweight women's squad got stuck on the George Washington Bridge for three hours; the weigh-in volunteers kept the scales open for them.

-Been a year for a new event called row-swim. We heard of at least 3-4 scullers flipping today; thinking back to Jr. Worlds and other regattas, what is with the flipping in 2018? There were several right in the same spot at the start (see photo in the above story.)

And one sculler had the misfortune of flipping in front of the Cambridge Boat Club, which serves as regatta HQ, complete with a room full of reporters and photographers. 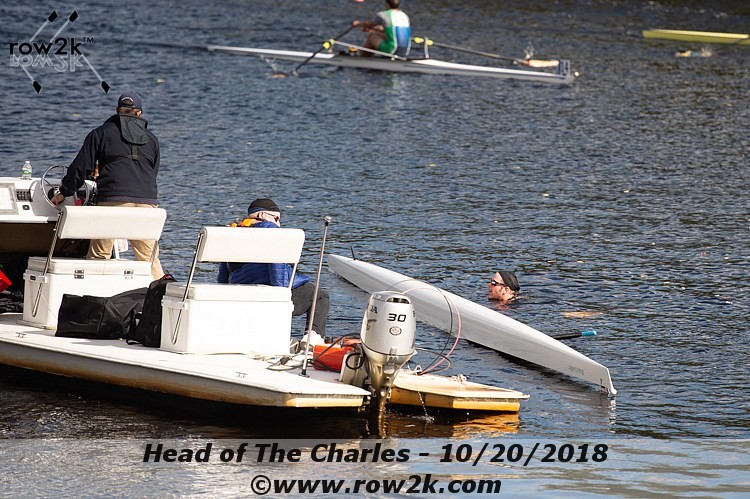 But, once was not enough. Once back in his boat he got about, oh, 50-feet and went over again. 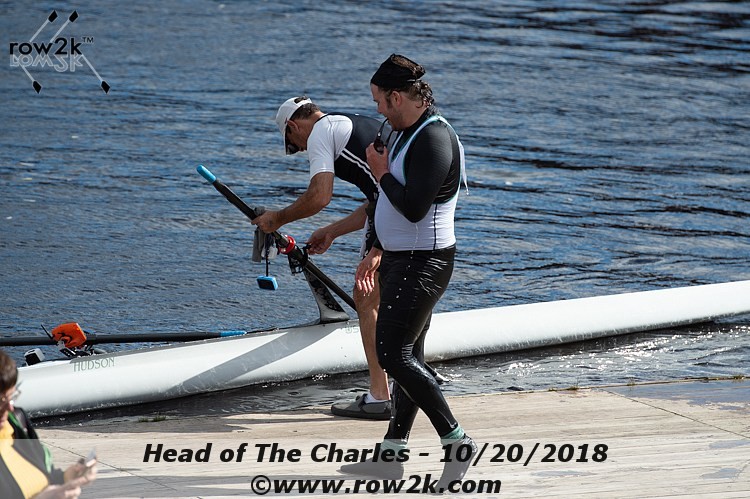 -The banks of the Charles were awash in music of all kinds yesterday. There was the Harvard University school band apparently marching and playing their way to the school's women's rugby game (Harvard won, beating Brown and advanced to the Ivy League Championship) just about the time the regatta was starting.

(Not music, but did anybody hear or know what those explosions were around 10am? )

And then later, someone could be heard playing a Bagpipe version of Row, Row, Row Your Boat.