Charlie Hamlin has good reason to think that every time he gets into a boat to go race since suffering a sudden and near fatal heart attack this spring - while rowing - that he experiences something special.

But it has nothing to do with having a heart.

" No," Hamlin said when asked if he had any thoughts on the start line at the Head of the Charles about the day in June when a piece of plaque ruptured and near killed him. "I am sure that there are people who are then concerned after something like that, but for me it was just like waking up and getting up in the morning and going on with my work.

Before this story goes any further, a review of what happened to Hamlin is necessary. Hamlin rows regularly and it is not uncommon for him to row more than once in a single day. So just after rowing in a single, he jumped into a four that had been dedicated to the rowing club he helped started near his home in Bellingham, Washington and rowed again in the dedication ceremony.

And that's when it happened.

Now, Hamlin does not just brush aside the fact that for all intent and purposes he was dealt a fatal blow that day and should not have been in Boston Saturday rowing bow in the Cambridge Boat Club's men's senior master's eight. He suffered the kind of sudden heart attack that kills up to 60 percent of heart attack victims.

In fact, he recognizes the fact that his survival was a miracle - three, actually. 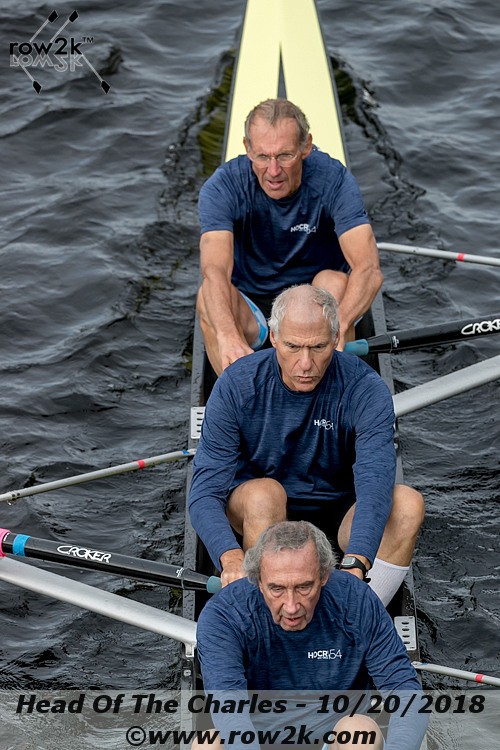 "The first was the fact that it didn't happen when I was out in my single alone. Because if you have a widow maker in the single and you flip, it's over." Hamlin knows at least two other rowers who had something similar to that happen to them.

"The second miracle was that there was an EMT in the launch following our second outing. And, he went at me at 120 beats a minute for 17 minutes, and that was enough to get me to the ambulance and then the hospital and the greatest miracles of all is that by virtue of what that guy did to me with CPR, there was zero heart damage. Zero."

Hamlin did have several broken ribs that resulted from the force of the CPR, "and that really hurt."

But he had no recollection - or pain from the heart attack - it happened on a Saturday, he woke up in the hospital on Monday and went home Tuesday. Hamlin has had a lot of follow up tests, and his doctors all agreed he didn't have any resulting liabilities.

They did suggest he take it easy during the summer rowing season, but would be good for the Head of the Charles. It probably comes as no surprised to Hamlin's friends that, he not only competed this summer, but rowed in three events in the Masters National Championships and then did 11 at the World Rowing Masters Championships in Sarasota, Florida last month.

As for his head of the Charles crew?

"They have been very kind," he said while noting, "I used to stroke this boat. They put me in the bow today. I wonder if they were thinking, 'can he still pull',".

It's All a Matter of Course On Regatta Weekend
Get our Newsletter!
SUBSCRIBE
Support row2k!
If you rely on row2k, please support row2k!