2016
Overview Features Photos Video News ☰
Head Of The Charles Regatta > 2016 > Features
Another Look Around the Bend for Ed Smith
October 20, 2016
Amanda Cox for the HOCR 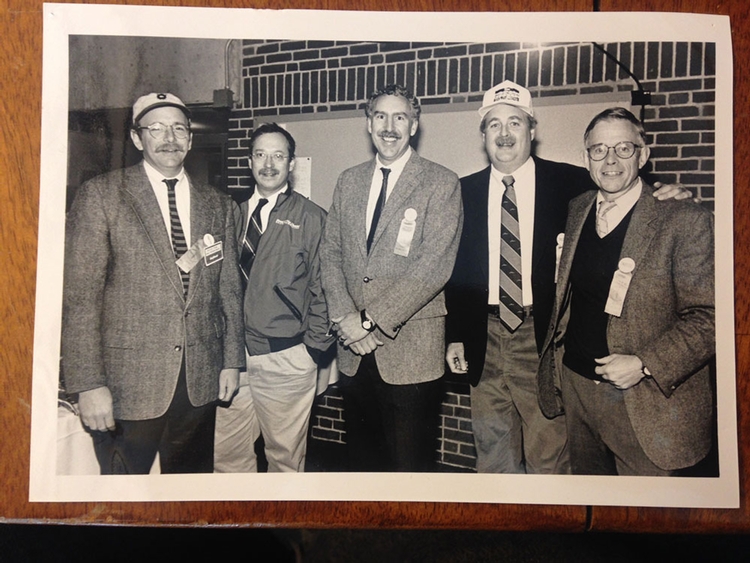 Every October, like a frothy pumpkin spice latte to an Autumn-connoisseur, the Head Of The Charles Regatta draws a community of rowers and non-rowers to the banks of the Charles River. They're here to see Andrew Campbell fight off Mahe Drysdale and Gevvie Stone set record after record on her home course. They're here for the thousands of youth competitors taking their first racing strokes on this river; to see family young and old on the famed windy river. And like every rower with a Concept2 chapstick in their vest pocket, they're here for the bright lights and bedazzled tents of the sponsors.

You can thank Ed Smith for helping to kick-start all that.

It's impossible to recount the history of the HOCR without considering Smith, the mastermind behind many of the Regatta's initiatives. His energy is contagious and since the moment he stepped foot into Cambridge Boat Club (CBC) and began to volunteer for HOCR, it seems not a waking moment passed that he didn't think of ways to improve the regatta. Smith has faithfully served as Treasurer, Race Director, Trustee, and finally he served as the Chairman of the Board from 1997 until his retirement in 2015.

Upon graduation from College of the Holy Cross in 1973 where he rowed on Lake Quinsigamond, Smith moved to Boston and planned to continue rowing at CBC. The club, which had only recently taken over running HOCR, recruited him to volunteer, and he was immediately swept up in the world of this young, but growing regatta. That year Smith raced his very first HOCR in the novice single. The following year, he became its first treasurer.

"In those days if you wanted to join CBC you were shanghaied into volunteering with the head. If you had a skill that the regatta needed, you were a shoe-in for membership at CBC. Ed was a CPA and the regatta need a treasurer - It was a perfect fit!" said Steve Carr, a longtime friend of Smith's and former HOCR trustee.

Little did this young graduate know that this first role as treasurer would guide him through his volunteer career at HOCR. Smith has done it all from designing the tee shirts (even though according to Carr, "He is not and never will be a graphic designer!"), selling the programs and posters, hauling huge garbage bags of cash to the bank the morning after the regatta, and serving in many managerial roles. When the Regatta faced financial burdens requiring them to sink-or-swim, so to speak, he led the directors in instrumental decisions to have licensed merchandise, recruit sponsorship, and most notably to bring on a full-time staff.

"Ed loves a challenge, and he loves growing an organization," said Carr. "I think initially it was a challenge to get the regatta accounting in order, and then to make the regatta break even. Later it became a challenge to manage costs, insure long term viability, deal with government agencies, and find the right person to oversee the future growth of the regatta."

While they had faced some roadblocks in the past, Smith and his fellow Trustees were suddenly faced with a mountain of a challenge as the regatta grew wildly with competitors and spectators in the late 1980's. The Massachusetts Department of Conservation (MDC, now known as the Department of Conservation and Recreation – or DCR) bills grew exponentially to cover the costs of clean up and security, and without any sponsorship, the Regatta relied on entry fees and state funding to cover the skyrocketing costs. The MDC recommended that the Regatta find sponsorship – something they had been resisting for many years – or move the event to summer or winter, when athletes and spectators would be minimal. 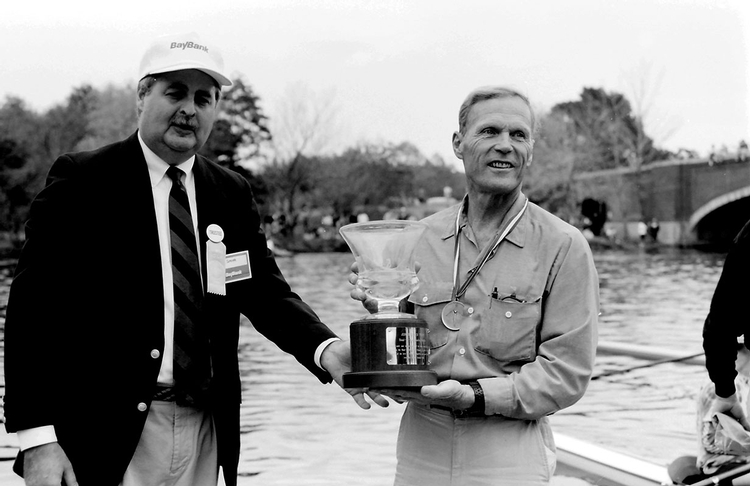 It became evident that state funding would not continue and entry fees would no longer cover costs; the Regatta had to explore new forms of financing the growing event, and to do so, they would need someone to dedicate themselves full time to that task. Without a director who could seek sponsorship and long-term funding, the costs would fall to the athletes. For a year, HOCR founder, D'Arcy McMahon served as the first Executive Director, before Smith and Carr recruited Schoch to be the first full-time director in 1991.

Smith and Carr knew Schoch from his year teaching at the Belmont Hill School in 1978-1980, when he rowed at Cambridge Boat Club. So when they saw Schoch at work running the Challenge on the Hudson – a regatta that had been formed to support environmental group Scenic Hudson – and securing IBM as a sponsor, they knew they had found their guy. As an oarsman and coach with business acumen, they had found the person they were looking for to fill the role of Executive Director.

Quickly, Smith became a mentor to Schoch, as he began to work with a new group of people and learn the ropes of HOCR and CBC. Together they brainstormed and reached out to potential sponsors, dealt with the aftermath of miscalculations, and planned for the future of HOCR.

"We were like Cheech and Chong - the Fred and Ed show, with Tom [Martin, HOCR Treasurer] right beside us - we were the three musketeers," said Schoch.

The biggest decision they tackled was the addition of a second day to the regatta in 1997. For the first 31 years of HOCR, the racing only took place on Sunday, but after the 1996 regatta was famously cancelled due to the 100 year storm, their hope to add a second day came to fruition.

"After we had the rain [cancellation], we realized we have to mitigate the risk and expense - so Ed and I convinced the Managing Directors to go to two days, but for the first couple years it wasn't even two full days - it was a few hours Saturday morning; over time it grew," said Schoch.

Schoch praised Smith's foresight and ability to make thoughtful, long-term decisions regarding the financial future of the regatta.

"[Smith] looks around the bend. He can forecast what's in the best interest of the regatta. He's not afraid to take a calculated risk. He's a CPA so he doesn't take risks, but he's very forward looking."

Smith is beloved for so much more than his business acumen. His gregariousness and love for rowing is contagious. He cared for the Regatta for so many years not just because he could crunch the numbers, but because he loves racing, rowing, and simply being on the water. On Regatta weekend, when he wasn't in troubleshooting mode, he could always be found on the water – racing, observing, announcing – anything to be part of the action.

"Ed was like the ring master of an eight ring circus. All of which he did with the biggest grin on his face," said Carr. His enthusiasm was infectious and kept volunteers coming back year after year."

The Regatta would not be the event it is today - a festival, reunion, and race of a lifetime all rolled into one - without the influence of the Ed Smith. The moral of the story? Be careful what you volunteer for. It might turn into a lifelong passion.

Read more about the Head Of The Charles in their all-new digital program here!