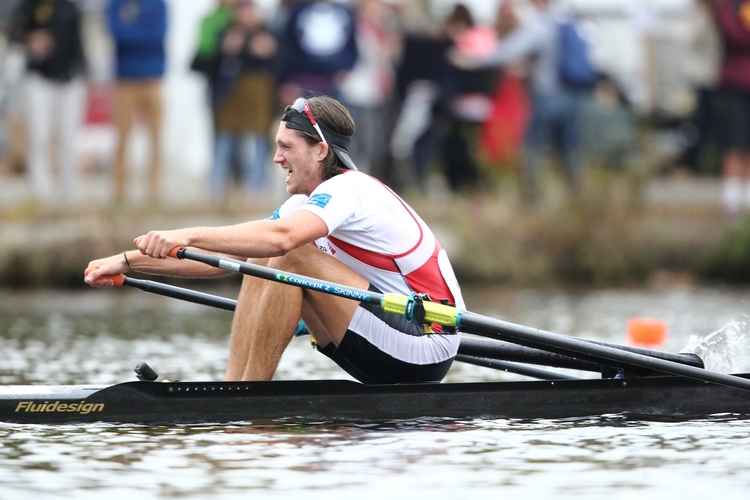 If the sheer size of the youth divisions, the number of peaks on the high-top tent, the sea of orange and green buoys, and the height of Hamish Bond didn't already overwhelm you, there's always one quick look at the elite scullers field. Sunday afternoon will be a star-studded throw-down in the Championship Eights but Saturday's Championship Singles and Doubles are also worthy of the golden anniversary.

Only Ursula Grobler and Kate Bertko have broken US Women's Single sculler Gevvie Stone's reign of victories in the HOCR Champ 1x since 2008. Bertko will lead the Champ 1x field at bow 1 after a narrow win in 2013 and a bronze medal performance in Amsterdam. Stone is fresh off her fifth trip to World Championships and a 3rd place finish in the B final. Australian sculler Kim Crow will chase both Bertko and Stone from bow 4. Crow's notoriety increased ten-fold when she medaled in both the double (silver) and the single (bronze) in the 2012 Olympic Games in London.

Devery Karz from the US Lightweight Women's 2x that finished 10th in Amsterdam will start ahead of Kim Crow and will hope for a tailwind with both Crow and former US Women's 1x representative, Lindsay Meyer starting at bows 4 and 5 respectively. Longtime HOCR competitor and eight-time national team member, Kristin Hedstrom, will race from bow 6. Lastly, Michelle Sechser, Karz's 2x partner at the 2014 World Championships and the US Lightweight 1x representative at the 2013 World Championships will start at bow 7 to bookend this field of elite scullers.

Our pick: According to World Rowing, Crow's hobbies include "coffee." We like her already but it's hard to outpace or outshine hometown hero, @gevgevs. Not to be discounted in this event are two Dark Horse Bates College alums starting back-to-back at bows 8 and 9, Elizabeth Sonshine and Nicole Ritchie. Go bobcats.

Women's Championship Doubles
As the only returning medalists from 2013, Marika Page and local sculler/coach, Sarah Schwegman will kick off and try to hold off this field of experienced and decorated scullers. Six of the women from the Cambridge Boat Club Championship Eight entry will pair up (to double up) in this division including the combinations of Magdalena Lobnig / Chantal Achterberg at bow 3, Donata Vistertaite / Mirka Knapkova at bow 5, and Sanita Puspure / Carling Zeeman at bow 6. Lobnig, representing Austria, finished 5th in the Women's 1x in Amsterdam while Dutch sculler, Achterburg finished seventh in the 4x. Achterberg was a stellar pick for the Great 8 with a 2012 Olympic bronze medal in the Women's Eight. Lithuanian sculler Donata Vistartaite was the 2013 World Champion in the 2x and 4th place finisher in Amsterdam. She'll pair up with Knapkova, the 2012 Olympic champion from the Czech Republic. Irish sculler, Sanita Puspure, 4th place finisher in the 1x in Amsterdam will row with Carling Zeeman, a Canadian Sculler who finished 6th in the Women's 4x in Amsterdam and third in the HOCR Champ 2x in 2013.

Starting at bow 2 and ahead of the CBC doubles, will be Dutch scullers Elisabeth Hogerwerf / Inge Janssen who finished 7th in the 4x and 2x, respectively, at the 2014 World Championships. Janssen won this event in 2013 but with a new partner, she'll lose the top seed. Also thrown into this highly concentrated mix of talent, is the Dutch sweep duo of Dominique van der Pauw and Marleen Verburgh who both raced in the Dutch Eight that finished 8th at the 2014 World Championships. Closing this field will be Nicole Beukers and Claudia Belderbos further back in the field at bow 9. French sculler Belderbos claimed 4th in the Women's Double in Amsterdam while Beukers (Dutch) finished 7th in the 2x.

Our pick: If Carling Zeeman can improve her steering over the circuitous 5000+ meter course her boat navigated in 2013, then the Zeeman/Puspure double is our pick. Another dark horse is hiding as unaffiliated in the middle of the pack with 2012 Olympic Champion Taylor Ritzel (Women's Eight) and 2012 Olympian Sara Hendershot (Women's Pair).

Starting at the front of the field is the Norwegian M2x of Kjetil Borch and Nils Hoff. Borch, who smashed the previous HOCR course record in 2013, will look to defend his 2012 and 2013 Championship 1x titles. Hoff's 2nd place performance in 2013 was also faster than the previous course record. Borch and Hoff will have their work cut out for them holding off Olympic champion Mahe Drysdale from bow #3. This Kiwi's form continues to improve as the 2nd half of the quadrennial approaches. Chasing Drysdale, two-time Dutch Olympian Jozef Klassen narrowly missed a 3rd place HOCR medal in 2013, and is undoubtedly motivated to stand on the podium this year.

Despite his offer to "bake anything" to get a do-over after a buoy strike foiled his LM1x quarterfinal at the 2014 World Rowing Championships, crowd favorite Andrew Campbell had to settle for a C-final win in nearly a World Best Time. Campbell, starting bow #5, has proven himself among the top international lightweight single scullers, but will need his wings to fly with this field.

Behind Campbell, Julien Bahain looks to break into the single sculls fraternity for Canada after 10 years and an Olympic bronze medal competing for France. New to this event, Bahain will need to keep his head on a swivel to hold the right line on this course.

As the seventh boat in the parade, Craftsbury's John Graves earned a World Cup medal in the USA M4x this past summer but a B-final finish in Amsterdam left him eager to improve. Word on the street is that John's been rowing the course for a month and posting times that could take down some bigger names. John's M4x and Craftsbury teammate Benn Dann start in bow #8, but all pleasantries will be left on shore for this tussle.

Men's Championship Doubles
Welcome to the event of brotherly love.

Meindert Klem and partner, Michiel Versluis scored the luck of the Dutch with bow 1 in this field. Versluis, 2013 World Champion in the 4- will likely rely on two-time Olympian and, more importantly, Boston University alum, to navigate all seven bridges.

Synek and Tufte chase this duo at bow 2. Between them they share 5 Olympic medals, 4 syllables, and 1 eponymous underwear line (#tuftewear). Enough said. They'll be rowing as Craftsbury Sculling Center in the Men's Champ Eight because the Northern Kingdom was happy to take them.

At bow 3 we have the Sieber brothers who have opted to avoid weigh-in and race open weight. They finished 12th in Amsterdam and 6th in the World Cup II. You'll find this pair in the lightweight Great 8 racing as Cambridge Boat Club on Sunday afternoon in the Men's Championship Eight.

Chasing the Sieber brothers, we have hometown favorites and our first Lightweight entry with Austin Meyer and Josh Konieczny at bow 4. These two finished 10th at Worlds in the LM 2x and will race in the CBC Champ 8 entry as well.

The brothers Sinkovic (Valent and Martin) have paired up successfully for the last five years including two gold medal performances in the quad (2010 and 2013) and a commanding win complete with a world's best time in the 2x at the 2014 World Championships. They don't have their own underwear line but will race in the Craftsbury Great 8 with Tufte and Synek.

The Dutch twins, Tycho and Vincent Muda will line up at bow 6 after a 6th place finish in the LM2x in Amsterdam. These twins transitioned from the four to the double after the 2012 Olympics and won't need to learn how to handle a sweep blade on Sunday afternoon when they hop into the CBC Great 8.

At bow 7 we have a Danish lightweight combination. This lineup pairs defending Olympic champion Mads Rasmussen as he continues a comeback on the road to Rio with Steffen Bonde Jensen (all e's and all business), owner of multiple CRASH-B hammers in the lightweight division.

Our pick: It's hard to overlook the pretty rowing of the Sinkovic brothers but this course may benefit the Synek/Tufte combo. That said, there's always the brothers Graves back at bow 12. We're not sure if three-time HOCR champ 2x winners can qualify as "dark horses" but we'd like to see them back on the podium.

Good luck to all those competing! May the odds be ever in your favor.