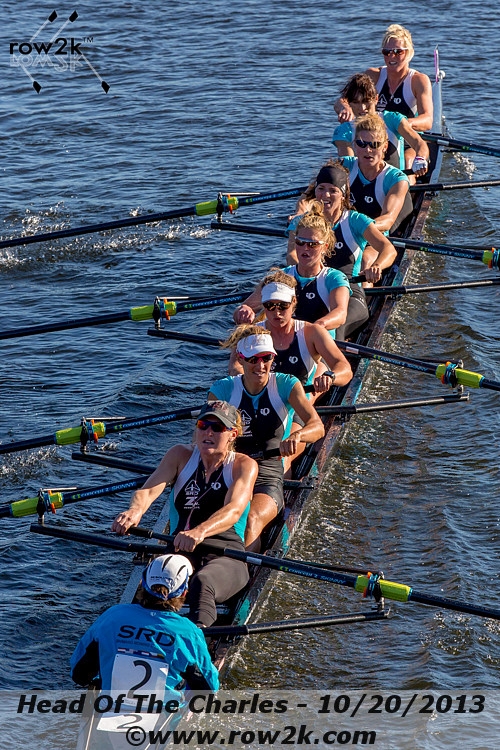 Few boats will better epitomize the spirit of the 50th Head Of The Charles Regatta than this year's edition of the Women's Great Eight. This Championship eight boat that brings together eight rowers and a coxswain from eight different countries, each boasting a rowing résumé brimming with accomplishments at the highest levels of the sport, embodies everything the Regatta stands for.

But for as long as the Regatta has graced the Charles— five decades this October—the women's Great Eight came only recently.

The first boat of its kind was organized in 2012 by Olympian and four-time HOCR singles champion Gevvie Stone. The 2012 crew, which included Stone, lost the women's championship eight after a costly penalty. But the 2013 Great Eight seized a dramatic come-from-behind victory over the U.S. National team boat at last year's Regatta.

Stone did not row for last year's Great Eight but is back in it this year, looking to help the crew find the top of the podium for a second straight year.

"We definitely want to do well, but [we] also come for the fun of racing together, and I think, for me, it's about the experience getting to know my international competitors," said Stone, who will be sitting stroke seat for the Great Eight this year. "We share so much in common, in terms of how hard we train, and what our lifestyles are, and it's great to get some time to know one another as teammates."

This year's Great Eight coxswain is 2014 Harvard graduate Erin Driscoll, who helped her Radcliffe lightweight boat finish first among college crews in the championship eight at last year's Head Of The Charles.

"Gevvie first talked to me last fall so I've kind of been hoping all year that I would get picked to do it," she said. "I'm so excited to be coxing world-class athletes. It's actually pretty special to me because Gevvie and I went to the same high school, so it will be really cool for me to cox with her in the stroke seat."

"I'm really excited to have Erin cox us," Stone said. "She went to Winsor, which is where I went to high school as well. My mom coached her. I remember racing pieces against them one fall and I was taking notes on her steering and I was like, 'This is who I want to cox me.' I have confidence she's going to do a great job."

After Driscoll in the stern and Stone in the stroke seat, Australian Kim Crow will sit in the seven seat. Crow won two Olympic medals in London in 2012, a bronze in singles and a silver in doubles, and was the 2013 singles world champion.

Carling Zeeman, a member of the Canadian U23 team, holds the five seat.

Sanita Puspere, who represented Ireland in the 2012 Olympics, has the three seat.

Sitting bow seat will be Donata Vistartaite, a member of the 2012 Lithuanian Olympic team and a 2013 doubles world champion.

Stone and Crow will also be racing singles this year. The other six members of the Great Eight will be racing doubles Regatta weekend.

Although most of the members of the Great Eight do not primarily race in eights, the combined experience of the crew allows them to work together seamlessly despite limited practice time together as a unit.

"It's definitely not perfect," Stone said. "But from what I remember, it gets better as the rating goes up and as you start pulling harder because there's just less room for variation. At the lower rates people start doing their own thing and then it doesn't go quite as well."

The Great Eight's stiffest competition this year will likely once again come from the U.S. National team boat.

In addition to the U.S. crew, the Great Eight will also face the best college crews from across the country, including Driscoll's former teammates at Harvard.

"It will be interesting," Driscoll said, "definitely, to be racing a Radcliffe crew. Of course I want the best for them. I'd like to see them beat out all their collegiate opponents."

While the Great Eight will without a doubt be racing for a victory this year, Stone stressed there is so much more to the Championship eight race and the Regatta itself than just the competition.

"The Head Of The Charles is like rowing Christmas," she said. "It's on a different level than the World Championships and the World Cups, which are amazing experiences. But this is more for fun. It's just unbelievable to come together with so many great friends who all share a love and a passion for the sport, and to get to race. It's a great weekend."