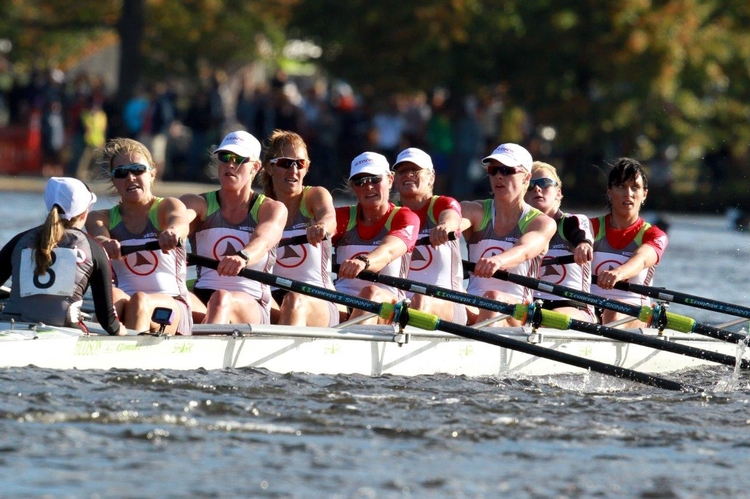 This year's women's Great Eight started to come together at last year's Head Of The Charles. Jack Carlson, a former Georgetown coxswain now studying at Oxford, coxed a combined crew of Great Britain and New Zealand Olympians in the women's Champ Eights a year ago, rowing under the London Rowing Club banner and finishing fourth. Knowing there would be no repeat of the combined British-Kiwi crew—the British rowing championships are taking place the same weekend as the Head Of The Charles—Carlson and boatmate Rebecca Scown, together with Scown's countrywoman Emma Twigg, began recruiting for 2013.

The appeal of the Great Eight for these elite scullers is both the challenge and the novelty. "The idea is to bring together rowers who don't normally row together," says Carlson. "Rowers from different countries, rowers who are used to competing in small boats, into an eight – the fastest and most fun boat category."

Only one woman, Elle Logan, 25, of the United States, has competed recently in an eight on a high level. She was a member of both the 2012 and 2008 women's Olympic gold-medal crews. Nonetheless, she is currently a U.S. women's single sculler – and has never rowed with any of the women who make up the remainder of her team.

Three New Zealanders will accompany Logan on this journey up the river: Scown, 30, Twigg, 25 and Kayla Pratt, 22. Scown and Pratt row together in a double and won the bronze medal in this year's World Rowing Champions in Chungju, South Korea. Scown was also the 2012 Olympic bronze medalist, and Pratt the 2012 Under-23 World Champion. Twigg currently rows for her country in a women's single, snagging this year's World silver medal and having two Olympic appearances.

Closing out the group is 24-year-old Lithuanian doubles rower, Donata Vistartaite, who has also made an Olympic appearance, and holds the 2013 World Champion doubles title.

The 26-year-old Carlson has kept his coxing skills fresh since leaving Georgetown for Oxford. He belongs to the Oxford Brookes University Boat Club, and has piloted their crew in some of Britain's most prestigious regattas, including the Head of the River Race, where he led his boat to fourth place out of over 400 crews. Carlson notes the biggest challenge in the Head Of The Charles will be trying to get everyone to row in the same manner.

"No doubt everyone will have their own way of doing things, we'll need to make everything gel," he says. "The other challenge of course is that some of the scullers have done very little sweep rowing in the past."

The Great Eight crew will face various high-level competitors including the U.S. women's eight and the Canadian women's eight – both of which have substantial experience rowing together, while the Great Eight will take their first strokes together only days before the race.

But, says Carlson, "The great thing about bringing small boat rowers together into an eight is that they all have a good feel for the boat. All these women are the absolute top level in the sport – so although it will be a challenge, the task won't be insurmountable by any means."

And as for Carlson himself, he knows that the line he steers up the curvy course might well be the most critical element of all. Last year's Great Eight finished second to the U.S. gold-medal crew, losing the race by seven seconds—after incurring a 10-second penalty for a missed buoy.