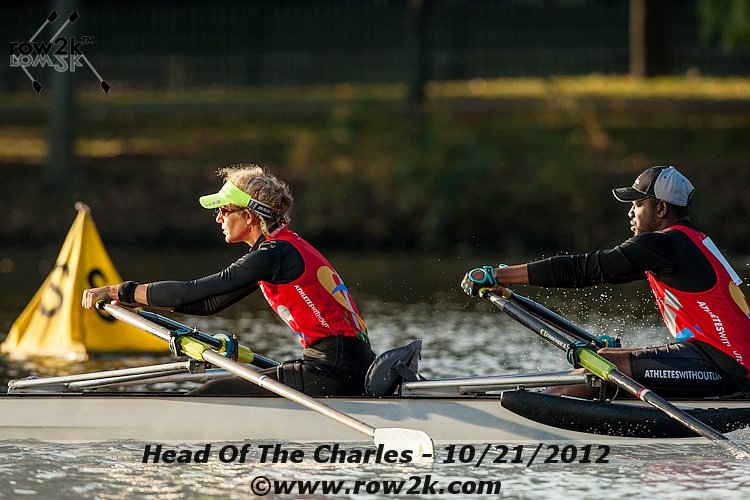 For two crews in the para races at this year's Head Of The Charles, their first strokes on the river will carry added significance.

For Canadian Cameron Sinclair and Buffalo native Betsy Mitchell, their first strokes in Boston will be the very first they've ever taken together, having arranged their Can-Am Trunk and Arms double via Facebook, after first meeting at the Canadian Henley last summer.

For the Australian composite four of Carol Cooke, Steve Knott, Kate Murdoch, Peter Siri, and coxswain Nell Duly, their first strokes on the Charles will make Head Of The Charles history, for they will become the first international crew to race in the HOCR para races, now in their fourth year at the Regatta.

The Australians journey to Boston has been a triumph over far more than their physical disabilities.

"Our rowers are all separated by thousands of kilometers," said Anne Craig, who, together with Barbra Ramjan, manages the Australian team. "It's been pretty difficult to meld the team together given the distances we have, so they've certainly come together for each other - which is pretty remarkable - we've only seen each other once a month, we started in April."

Team manager Barbra Ramjan added, "It's going to be tricky when you've got five able-bodied people, but when you have five people who come with specific disabilities that affect their day-to-day life you've got a whole lot of other issues you've got to take into account, this crew has melded as one very well."

Ramjan and Craig, who head the team on the financial front, both come from the Balmain Rowing Club. The Sydney-based club is the fourth oldest on the Sydney Harbour, established in 1882, and is "a true community club" Craig said, "it's run by hundreds of volunteers, so it involves a lot of raising money for getting equipment."

Although the rowers on the team are not all affiliated with the Balmain club, they all train there when they meet once a month, which involves long flights and drives to get to training; but as Ramjan said, "the team is fully committed."

Funding has not come easy for the crew. The team set up an Indygogo page for family and friends to donate and support their trip to Boston, to date, they raised $5,280. The crew has also received funding through the assistance of the Australian Government 'Australian Sports Foundation' (ASF) program.

When asked what their goal for the Head Of The Charles was, Craig, in quintessential Aussie humor quipped, "To win! Isn't that why you compete in any race?"

The Aussies know their work is cut out for them on that front, for the American LTA crew racing under the name Old Glory Boat Club is comprised of four veterans from last summer's fourth-place boat in the world championships in South Korea, and they will be the heavy favorite in Boston.

"The goal is to show that it can be done, that you can take a group of LTA rowers, that you can train them up to an international standard, and they can get out there and do a fantastic time," Ramjan said of the Aussies' real goals for Boston.

"Yes, overarching all of that is the desire to win, but we win when we get on the plane, because we've proved that we can do it. Done without any really formal support, we've just taken this bunch of rowers who would like to row and that needed to commit, we've committed to them, they've committed to us.

"Once we stand on that plane, we win, anything after that is cream. We'd like to get that cream, but if we don't it doesn't matter, we've won anyway."

Sinclair/Mitchell Cross-Border Double
Cameron Sinclair, 22, is a former sledge hockey player from Canada. He got close to representing Canada nationally for sledge hockey eight times. After five serious concussions, however, he reconsidered his life as a sledge hockey player, and over the past five months has transitioned to rowing.

Sinclair is eligible to take part in adaptive rowing because of an unnamed condition he has that restricts the movement of his knees. "Essentially when I kneel, or squat down my knees will instantly lock up, and I have not much movement in my feet at all, so trying to push up and trying to manipulate them does not work," Sinclair said.

Cameron was introduced to Rowing through his personal trainer, who told him "you know what, you're really fit, you're good for long distance," Sinclair recounted, "sledge really isn't built for long distance, its all short – stop here stop there and all that. He said I should try something maybe like rowing or do something that requires long distance, and I said 'okay, whatever.' I sat on the idea for a while and then he brought it up again later on, and he said 'look they're having like a row-to-podium program' which essentially converts high performance athletes from other sports into rowers, and he said I should give it a shot."

After tryouts in Ottowa, Sinclair 'passed with flying colors' and the trainers "were really really impressed with my result, they said, 'you should take up rowing', you've got a future ahead of you'", Sinclair said. "I don't have any regrets about it whatsoever right now."

He met his Head Of The Charles partner at last summer's Canadian Henley, without realizing she would become his Head of the Charles partner. "I admired what a good sport Cameron was," said Betsy Mitchell, "because he was the only male rower, they put him in with the women, and we were all older than him, but he was a good sport and he went along for it".

When Mitchell was looking for a partner for the Head Of The Charles, "nobody was available," she said, "so between the organization Row Canada, and US Rowing, we were able to collaborate and come up with what we call our CAN-AM (Canadian/American) team, and Cam and I have been talking to one another back and forth, on email and messages and Facebook and just getting all the details together to get ready for the Regatta." They'll get the chance to row together just days before the Regatta.

Mitchell, 56, who currently resides in Sarasota, Florida, has been rowing for three years. "I started with our adaptive rowing program with my coach, Joe Dobson, and since then our program has been growing and been competing and it's been wonderful." Mitchell said. She has competed previously in regattas it Florida, Georgia, Philadelphia, as well as training in DC. She is eligible to row in the adaptive rowing competition because of her fused knee. "My disability is the result of and trampoline accident many years ago," Mitchell said.

Both Mitchell and Sinclair share a passion and enthusiasm for their rowing, but each with a unique take on that passion and enthusiasm. Mitchell hopes to be rowing for many years to come. "Getting down on the water is very freeing for somebody who might be in a wheelchair, or have a disability and can't do sports, but if they can sit in the boat, and get out on the water it is a very freeing feeling, and so I'd like to be able to help more people to do that." Mitchell said.

Conversely, rowing really is everything for the confident young Sinclair at this point in his life. Next year if everything goes his way, he hopes to compete in the world championships for Canada. "I've got the stats and everything to back it up," Sinclair said, "it's just whether or not I can find a female rowing partner, and then whether or not someone else does or does not beat me for that spot in the boat.

"I'm not guaranteed anything."

The Australian LTA crew will launch at 8:00am on Sunday in event number 30 in the Mixed Legs/Trunk/Arms Fours.

Betsy and Cameron will launch in the next race, at 8:17am in event number 31 for the Mixed/Same Gender Trunk/Arms Doubles