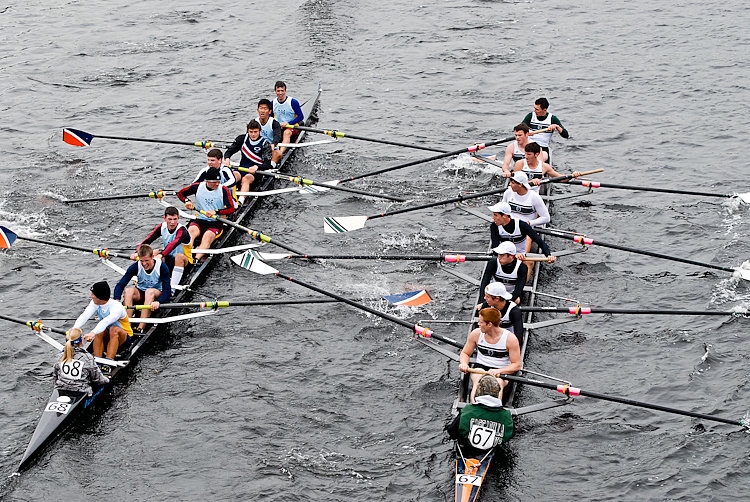 For years, the Head Of The Charles has been attracting top youth teams from across the country and internationally, but with the exponential increase in the number of youths participating in the sport, and fielding twice the number of HOCR entries than ten years ago, the competition has become fierce. . How competitive have the Youth events become? Though familiar club names regularly appear at the top of the results lists, finishing times are getting faster and faster.

For instance, in 2010, Community Rowing, Inc. smashed a 13 year course record in the Women's Youth eight, while , Marin, Saratoga, Mount St Joe's and New Trier all followed closely behind within a 1.0% margin.. Consider this: those five crews were faster than 30 of 31 crews in the Women's Collegiate Eights, held an hour later that afternoon. All five would have been in the top twenty in the Champ eights! That made the Youth Women's Eight the tightest field of medalists in any event in 2010. Not bad for high schoolers!

The old adage that "speed in the fall doesn't matter" doesn't seem to ring true these days. Marin, 2010 winners of the Youth Eight Men's division and second place finishers in the Women's division, went on to gold medal wins in the eights at Youth Nationals in June. Marina Aquatic Center's second in the Women's Youth Four was mirrored by second in the same event at Youth Nationals. New Trier's Women's Youth Eight's medal last fall at the Charles turned to Gold at SRA's. The Community Junior Women, with two eights in the top ten last fall at the Charles, won two golds and a bronze at Youth Nationals, then went on to gold at Club Nationals and Canadian Henley. Meanwhile Y Quad Cities Women's Double of Sharis and Baustian, also went on to win Youth Nationals, and the Jr B 2x event at Club Nationals.

Men's Youth Fours
With a longstanding history of fostering young rowers, Canadian clubs have shown consistent promise in the Youth Fours Men's division. Crews will aim to unseat South Niagara, the 2010 champion and perennial medalist. Upper Canada, after consecutive fourth place finishes moved up to third in 2010, will aim for an even lower finish order. Another strong Canadian entry, St Catharines was knocked down in the standings by a penalty, but will be back trying to improve their finish with an improved course. Local powerhouse Belmont Hill, with the home course advantage, but limited fall practice time should capitalize on their knowledge of the rivers twists and turns, along with Buckingham Browne &Nichols (#24), Boston College High School (#28), and Community Rowing, Inc. (#54), all Charles River regulars. The top American crew, Sarasota went from 12th in '08, to 6th in '09 to second last year. Could this be a breakthrough year for a southern crew? Showing the international draw of the HOCR, North American crews will also be joined by two teams from across the pond – Radley College and Abindgon School.

Women's Youth Fours
With entries from over sixteen states, the District of Columbia, and three provinces, the Youth Fours Women's division could see a champion from any part of North America. Last year's top five,, South Niagara (#1), Marina Aquatic (#2), Connecticut(#3), Peddie (#4) and Marion Mercy (#5) are all returning and will jockey for position in this year's race. . Though crews hail from across the continent, local crews have their highest representation in this race.Local crews Winsor (#12), Cambridge Rindge and Latin (#34 & 63), Newton Country Day (#36), Community (#38), BB&N (#42), G-Row (#62), Arlington-Belmont (#73) and Wayland Weston (#30), which posted a great showing at New Hampshire Championships this past weekend, should hear the shouts of many supporting friends and family along the course.

Men's Youth Doubles
A relatively recent event at the Head Of The Charles, the Youth Double has already become a showcase of top sculling talent. This year's field in the Men's division includes a mix of new and old partnerships. Of the top five finishers from last year, four, Brentwood (#1), St Catharines (#3), Narragansett (#4) and Saratoga (#5) all return one of their athletes, while Saugatuck has an entirely new twosome. Last year the top eighteen crews finished within a minute of the winner. Expect another close race.

Women's Youth Doubles
By inviting young scullers to the America's Fall Rowing Festival, the HOCR aims to encourage competitive sculling at the high school level. This strategy has worked, as is evident in the results of this event. This race offers a chance to see future rowing all-stars. Last year Y Quad Cities edged Saugatuck by 0.035 seconds. Elizabeth Sharis returns, with a new partner. Meanwhile Saugatuck's Alexandra Zadravec is teaming up with Rosie Grinalds, who last year came in fourth for Connecticut Boat Club in the same event. Meanwhile Reelick and Seydoux, last year's third place finishers are still together and will hope to close the 4.4 second gap. Also hoping to be in the mix will be Bromfield's double of Maclean and Hart. Although starting back in the pack they were second to Y Quad cities at Youth Nationals last spring. Local crews include Community (#14), BRC (#25), and the Newman School (#27).

Men's Youth Eights
The banner event of the Youth competitive class, the men's and women's eights are always packed and always exciting. Last year, Marin set a course record ending Eton's two year run at the top. Abingdon School (UK), starting 6th, were last July's Henley winner, so two British crews will try and take on the top Americans. In the men's field not only are traditionally strong programs represented, such as Everett (bow #2), Chaminade (Bow #4), and Canisius (#7), but look for a challenge from some emerging programs. BC High, whose team is only a few years old, has looked strong winning the Textile regatta, and the New England Junior & HS Regional Head race already this fall, while Saugatuck won the Housatonic.

Women's Youth Eights
The field contains many crews that have proven their competitive pedigree. Community Rowing, winners five of the last seven years, returns seven athletes from the crew that won the Youth Eight at Canadian Henley, and won the CanAmMex eight for the US. Starting right behind them will be Marin, last spring's Youth National Champions. Oakland Strokes, another west coast power, was a close second at Canadian Henley, with a young and promising bunch of athletes. Junior Women's National Team Head Coach Liz Trond, whose Maritime Crew won the Charles two years ago will certainly have Connecticut Boat Club, fresh off victory at the head of the Housatonic, charging through the field from the 62nd spot. Meanwhile traditionally strong Canadian teams St. Catharines and South Niagara start 20th and 25th. Waikato Rowing club from New Zealand is a relative unknown, but potentially fast crew.

HOCR Sunday: Chasing on the Charles

HOCR Saturday: Getting the Full Pull