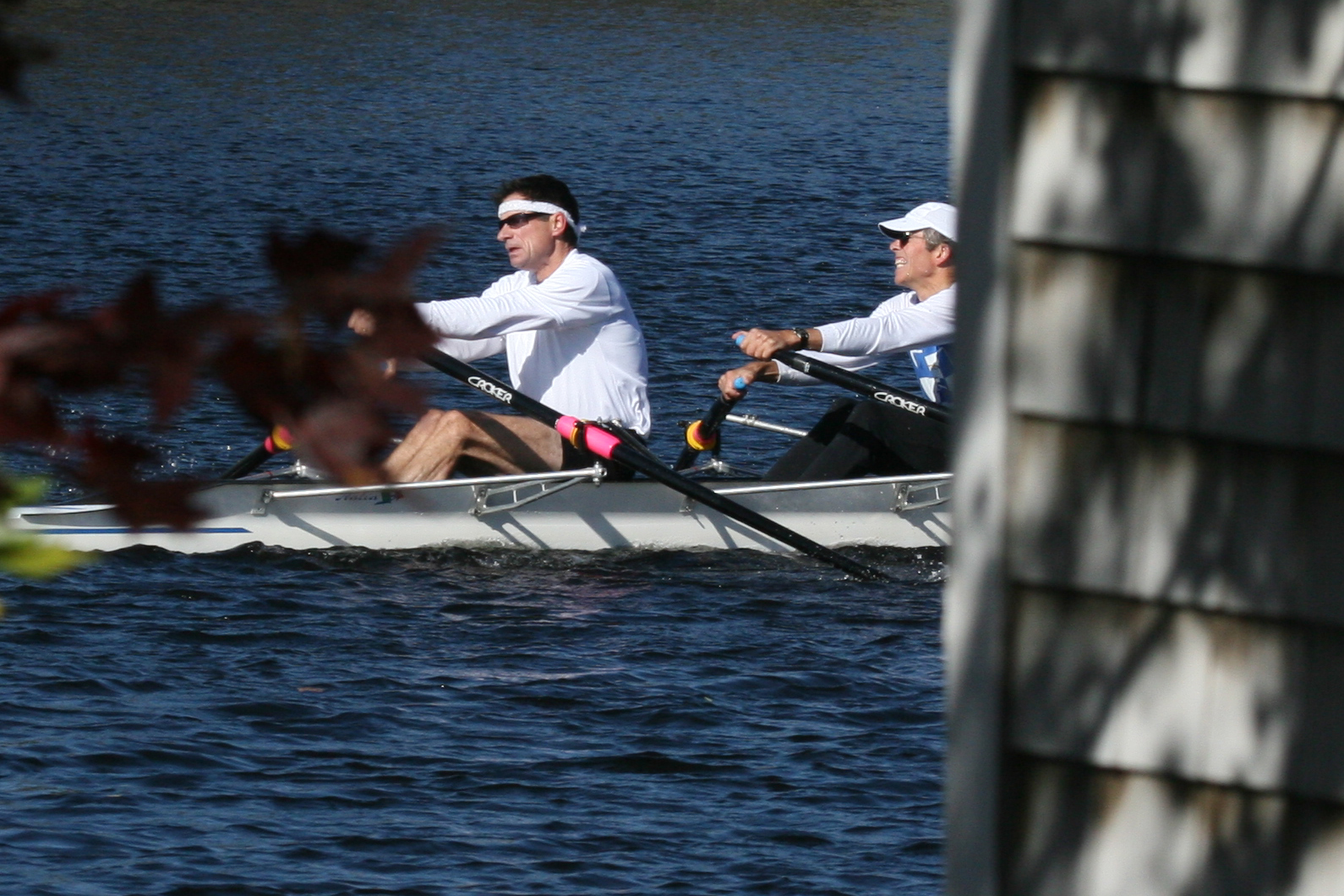 It's remarkable there are so many families with generations of rowers, yet there are so few opportunities for family members to compete together at regattas. The Head Of The Charles seeks to remedy that, as it introduces a special Parent/Child Doubles event, as part of the Directors' Challenge sculling events. On Saturday afternoon, immediately following the Championship Singles events, parents and their offspring will begin to cross the start line at BU's DeWolfe Boathouse to row as a family in a world-class event.

First to cross the start line in bow #1 is Charlie Hamlin, and his son Alex. Charlie was stroke seat of Team Attager's 2007 record-breaking Senior-Master Men's Eight, as well as stroke of the 2006 Senior Master's winning crew. Adding to his 40 years of racing experience, will be his son and former Captain of Dartmouth College Crew, Alex. Young Hamlin better be on his toes Saturday, to keep up with his record-setting dear ol' dad.

Starting in the second poll position is the family father/son combination of Borggaard and Borggard. Roger, the elder, a Hall of Fame member from Northeastern University, rowed on many a speedy crew for co-HOCR founder Ernie Arlett back in the 60's; an active Master oarsman today, Roger recently returned from the FISA Master's championships with no fewer than 8 gold medals! Still, youth prevails in this combination as Geoffrey, the younger, will set down a furious pace in the stroke seat to push pa down the Charles in pursuit of his Cambridge Boat Club mate, Mr. Hamlin.

Christopher "Tiff" Wood and his son, Christian, will be another father/son powerhouse, rowing bow #3. The elder Wood is a decorated Harvard and USRowing hero and his son, Christian is a recent IRA gold medalist. Christian, a Crimson sophomore, also has rowing blood from the other side of the gene pool as his mother, Kristen Aserlind, was a national champion from Wisconsin. Christian's dad, some may recall, was profiled in David Halberstam's "The Amateurs" which documents the quest of four oarsmen to become the United States' single sculler in the 1984 Olympics. Tiff is one of the founding members of the Charles River All Star Has-Beens (CRASH-B's), and this will be his 35th rowing of the Head Of The Charles.

Bridget Gribbin and her dad will be out to show the boys a thing or two, as she'll be rowing with her four-time US National Team member father, Edward Gribbin, in bow #17.

Meanwhile, two-time Olympian, five-time US National Team member, and still the reigning HOCR Champ Single Women's course record holder, Ginny Gilder, is out to prove its not always "father knows best." She'll be rowing in bow #19 with her son, Gilder Keeler, who is the first American to win the Western Championships in Victoria BC. Hailing from Seattle, and currently enrolled in Wesleyan, son Gilder is out to prove that a mother's intuition is always right.

An extraordinary family will be rowing in bow #24, as Charles Ippolito of Pelham NY will row with his 15 year old son, Nicholas. Young Ippolito was diagnosed with a brain tumor two years ago, at age 13, and has fully recovered since his surgery and radiation treatments, a short while ago. Proud papa Ippolito says, "as a parent, the opportunity to share anything significant with a child seems so rare these days; but then to find you share the love of a sport, like rowing, made my bond with my son remarkably strong. The opportunity to row the Charles together would be a dream come true." This pairing is living proof that a family of dreamers can swing together, through thick and thin.

The Directors' Challenge Parent/Child Doubles event will start at 4:32 PM on Saturday, October 18th. For a complete list of all participants, go to www.hocr.org/competitors/PC.asp