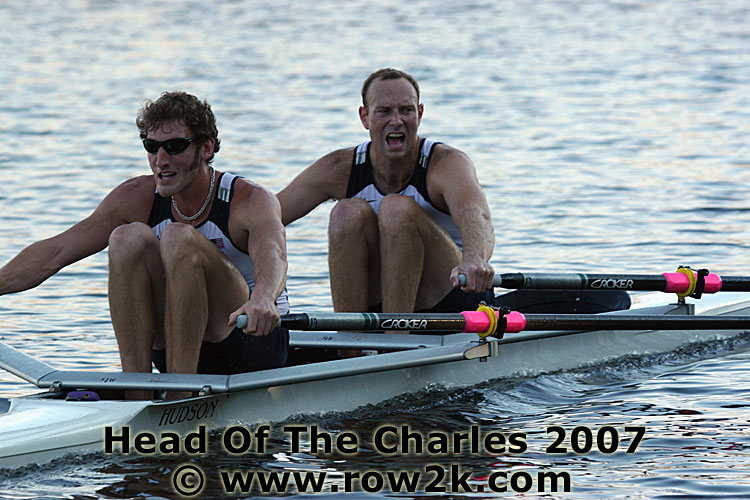 Stitt and DuRoss growling their way down the course in 07

Athletes freshly hatched from Beijing's 'Bird's Nest' will be flying in abundance at this year's Head Of The Charles Regatta. The races in the Championship Single, Double, Four, and Eight events promise to pack all the drama of a televised Olympic broadcast-live and in person on the Charles River-with no need to order home-delivery from your local Chinese food restaurant (or get up at 3am).

The 2008 Olympic men's single bronze medalist, a well-hydrated Mahe Drysdale, will be the first to cross the start line in HOCR's Men's Champ Single event. New Zealand Olympic teammate, Nathan Cohen, will be on Dysdayle's tail in bow #2. Last year, Cohen finished less than one-hundredth of a second behind Drysdale in the 2007 HOCR Champ Single. Meanwhile, this past August in Beijing, Cohen and fellow New Zealander, Rob Waddell, were edged out of an Olympic podium finish in the men's double event. Needless to say: Cohen is thirsty for a medal! Watch him salivate, as the clash of the Kiwis will be evident at the 44th Regatta. Meanwhile, Tom Paradiso, member of the US Men's coxless four in Beijing, will "pour it on" despite his back-of-the-pack seeding with bow #25. The slowest to cross the finish line will need to buy the winner a drink!

The spares for the US Women's Olympic team, Lianne Malcos and Brett Sickler, have combined for a one-two punch (their bow numbers, respectively) in the Women's Champ Single event at this year's Head Of The Charles. These women will spare each other no mercy as they duke it out on the course, ahead of their Olympic teammate, Margot Shumway. Please note that Shumway's bow #5 is in no way reflective of her quad's finish in Beijing. Meanwhile, Cambridge Boat Club's Gevvie Stone will attempt to join her parents, Gary and Lisa Stone, in the annals of HOCR history; Ms. Stone seeks to win a Regatta title, thirty-one years after her parent's respective Regatta victories. Why play with mom and dad's medals when you can get one of your own?

In the Men's Champ Doubles event, US National Teamers, Sloan DuRoss and Sam Stitt, lead the pack. Perhaps nicked by his quad's 5th place finish in Beijing-which followed a gold at the 2008 FISA World Cup stop in Lucerne-Stitt promises to set a scorching pace at this weekend's Regatta. The US Olympic Men's Double, Elliot Hovey and Wes Piermarini, will cross the start line fifth, behind the Dionysian double of Dimitrios Mougios and Vasileios Polymeros. The Iraqi men's double will not be in attendance at this year's HOCR, although Hovey and Piermarini's invite to the double to train in the US still stands.

Olympic medalists and Radcliffe alums Caryn Davies and Michelle Guerette are combining to form a Cantabrigian "Dream Team" in the Women's Champ Double. Expect course records to fall (and Radcliffe's popularity to rise) with the results of this race! HOCR Champ Double defending champs, Liz Mygatt and Margaret Matia, will cross the start first, hoping if Davies and Guerette pass them before Weeks Footbridge this Saturday afternoon, it will be just an illusion.

Coaches and spectators alike hope the USRowing's Women's Champ Eight can charge their way through the grueling three-mile course without Davies at the helm. It will be a shoot-out between Old Glory and the Maple Leaf as the 2007 HOCR course-record setting champions are closely followed by London Training Center's women-seeking to resolve a grudge against the American's. Looking to best the LTC boat will be ASR Nereus, the Dutch national team, as well as a composite Great Britain National Team eight rowing as the University of London/Tyran Boat Club.

There is no chance that USRowing's Men's Eight will taste gold this year, as the 2007 HOCR champions will not be fielding an entry. Leaving many to wonder: who will win the Men's Champ Eight event at this year's Head Of The Charles? Potential lies within Molesey Rowing Club's Eight, rumored to contain members of Great Britain's gold medal coxless four, as well as four silver medalist rowers from the U.K.'s Olympic eight "just sitting in for the ride." These chaps will apparently have a stately Regatta send-off, meeting with the Queen of England on Oct 16th at a reception for British Olympic medalists; they are hoping to "cross the pond" this weekend to do Queen Lizzy proud-and perhaps start a new revolution in Boston. Meanwhile, the French national team, rowing as Pole France Aviron Nancy, will have to boast more than a far superior cuisine (and French First Lady, Carla Bruni-Sarkozy) to beat the blokes from across the Channel. Collegiate entries in this event are invited to participate in the same contest: whose national team's wake tastes better?

Prepare for an international feast-with fast times and furious drama-from the 2008 Olympic competitors at the 44th Head Of The Charles Regatta! Bon appétit!

Who will be this year's true 'Head' Of The Charles?
Get our Newsletter!
SUBSCRIBE
Support row2k!
If you rely on row2k, please support row2k!