2008
Overview Features Photos Video News ☰
Head Of The Charles Regatta > 2008 > Features
How to go to, get situated, and get around the Regatta
October 10, 2008
HOCR Staff with Michelle Jaeger
1 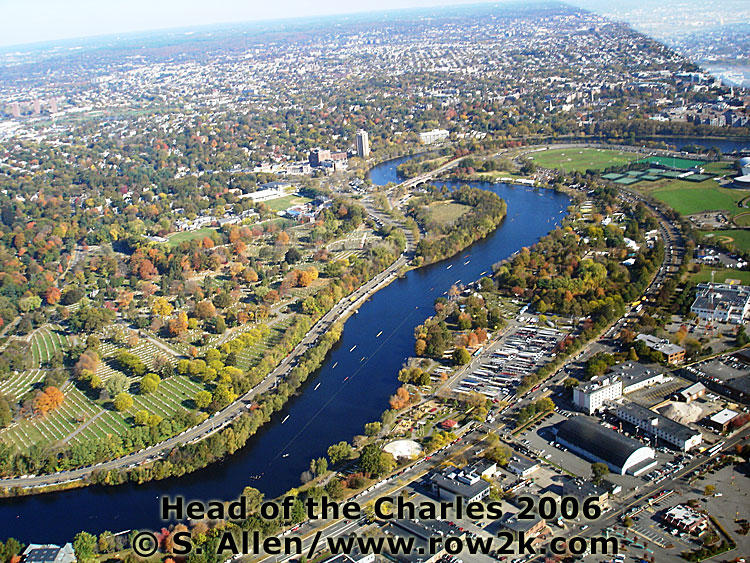 Getting to the Regatta
The main launch area for scullers is at the Singles and Doubles Launch (SADL) site has moved slightly upstream, and is now next to Magazine Beach on Memorial Drive (Route 2), in Cambridge by the Boston University Bridge. Parking at SADL is limited to car-topped Singles and Doubles. Temporary parking is extremely limited, so it's wise to coordinate with others from your region to share a ride.

The main launch area for crews (Eights, Fours and Quads) is still the same for 2007 - at the Finish Area Launch Site (FALS), which is near the Finish Line on Soldier's Field Road, at Herter Park in Brighton. Parking at FALS is limited to trailers. It's smart to coordinate with others from your region to share trailers.

Download the HOCR Course Map to assist in understanding the following directions. Do NOT rely on Google, Mapquest or others for directions, as they may take you via a route that trailers cannot navigate.

Driving to SADL (Singles And Doubles Launch Site)
I-90 (Mass Pike) East to Exit 18 Brighton/Cambridge. Follow signs to Cambridge. Proceed through several traffic lights and cross the Charles River via the River Street Bridge. Once across the bridge, take a RIGHT onto Memorial Drive so the river will be on your right. SADL is on the right, next to the DCR's Veterans Memorial Swimming and Wading Pool, immediately past Riverside Boat Club, opposite the large Shell sign.

Driving to FALS (Finish Area Launch Site)
I-90 (Mass Pike) East to Exit 18 Brighton/Cambridge. Follow signs to Cambridge. Proceed through several traffic lights and cross the Charles River via the River Street Bridge. Once across the bridge, take a LEFT onto Memorial Drive so the river is on your left. Continue for 1.6 miles. When the road forks (near the Cambridge Boat Club), stay to the left, following signs for Watertown/Newton. Proceed through the traffic light, and stay in the left or center lane to approach the Eliot Bridge. While crossing the Eliot Bridge, move to the right, and then turn to the right onto Soldier's Field Road, following signs for Newton. Herter Park in Brighton will be on your right; trailers should proceed to Lot 4.

All trailers must enter FALS from the Eliot Bridge and head south onto Soldier's Field Road. Please use the utmost caution when traveling on Soldier's Field Road, which is not designed for large vehicles. Do NOT attempt to turn onto Storrow Drive, as trailers will not clear the underpass tunnels and risk a substantial traffic violation.

A Regatta volunteer will meet each trailer to issue the driver a parking permit for a specific area, and direct the driver to that area. Courteous cooperation with their direction is expected.

Please note, SADL and Magazine Beach is NOT for overnight vehicle parking.

Fours and Eights go to FALS at Herter Park in Brighton
Boat launching and storage space for crews is available at FALS (Finish Area Launch Site) on Soldier's Field Road on the Boston side of the river by the Finish Line - between the Eliot Bridge and Northeastern University's Henderson Boathouse.

The FALS area will be open for trailer parking from 7AM until 8PM on Friday, October 17th. Those arriving before 7AM Friday will be directed to an off-site lot until opening time. HOCR volunteers and Park Rangers will be on-site to assist with parking, boat storage and launch questions. Arrivals on or before Thursday will not be allowed overnight parking; a penalty or fine will ensue. Trailers will not be allowed to line-up outside the lot before 7:00 AM because of traffic flow concerns. Parking is first come, first served.

Only boat trailers and their trucks may enter FALS. No other vehicles are permitted to enter the FALS parking lots. All unauthorized parked vehicles will be towed.

Due to limited space, preference will be given to fully loaded trailers. Lightly loaded trailers must be unloaded at FALS lot #2, on Soldier's Field Road, and then must go to an overflow lot at the Daily Ice Skating Rink, about 2 miles further upstream. Only trailers will be permitted to enter lot #2, and loading permits do not allow the vehicle to park. Unauthorized parked vehicles at any FALS lots will be towed,

Partially loaded and late arriving trailers may be directed to park at the overflow lot at the Daly Ice Skating Rink, after unloading boats onto the racks available throughout FALS.

If your vehicle is carrying shells to be used only on Saturday (ex: shells for Club events) and you wish to remove the vehicle permanently after the racing on Saturday, please let the Regatta volunteer at the gate know this and you will be assigned a special unobstructed parking space to allow you to leave on Saturday if available.

Vehicles carrying only Single or Double shells will not be permitted to enter FALS. They will be directed to the Singles and Doubles Launching (SADL) area at Magazine Beach, to offload their boats onto racks there. No trailer parking is available at Magazine Beach, but there is limited space for cars carrying shells. See below for more details about SADL.

Under no circumstances should a trailer be left unattended or parked on Soldier's Field Road (i.e., not in a parking lot) at any time - it will be fined substantially or towed away.

Contact info required on the dashboard or trailer hitch
In case of emergency, Regatta and security personnel must be able to contact the truck operator at all times. Accordingly, please leave a mobile phone number and name for the truck operator easily readable on the driver's side of the dashboard of the truck's cab. If the driver chooses to take the truck offsite, truck drivers are asked to place a mobile phone number and contact name in a clear plastic bag, and attach the bag with duct tape to the hitch part of the trailer. Trucks may detach from trailers to drive elsewhere, but those trucks will not be allowed to return until late Sunday afternoon.

Boat racks will be available near each dock
Trailers will be parked tightly together, and not necessarily in close proximity to the launching docks. The Regatta is providing boat racks near the docks for storage of boats during the entire weekend, and use of these racks is strongly encouraged. Once crews have parked their trailers, crews are asked to not move their trailer until after their racing is complete.

Security will be at both FALS and SADL
On Friday morning security will be on-site at both SADL and FALS, and will continue both Friday and Saturday evenings to provide a roaming presence. The Head Of The Charles Regatta cannot assume responsibility for equipment.

Drivers should obey posted regulations, and cannot park after dark; towing will begin at 5:00 PM each night.

Absolutely NO trailers may park on Greenough Boulevard; they will be towed.

Road Closures
Portions of Memorial Drive in Cambridge will be closed to all vehicles on Saturday and Sunday, October 18 and 19, from 8 AM until 7 PM, between Western Avenue and Cambridge Boat Club on Gerrys Landing Road. A portion of JFK Road, from the Anderson Bridge until Elliot Street in Harvard Square, will also be closed to traffic on Saturday and Sunday, from 10 AM until 6 PM.

The MBTA subway system
The use of public transportation is strongly encouraged all weekend. The course is within easy walking distance of three MBTA locations: on the Red Line at Harvard Square and/or Central Square stations, and on the Green Line B Branch at the Boston University Central stop.

Free Regatta shuttle service all weekend!
A free shuttle bus for Head Of The Charles athletes and spectators will circulate throughout the three-mile Regatta course route all weekend. The shuttle will run on Friday from noon until 7:00 PM, Saturday and Sunday from 7:00 AM until 7:00 PM.

For more info
Don't get lost at www.hocr.org/2008HOCR/getting_around.asp

Who will be this year's true 'Head' Of The Charles?
Get our Newsletter!
SUBSCRIBE
Support row2k!
If you rely on row2k, please support row2k!