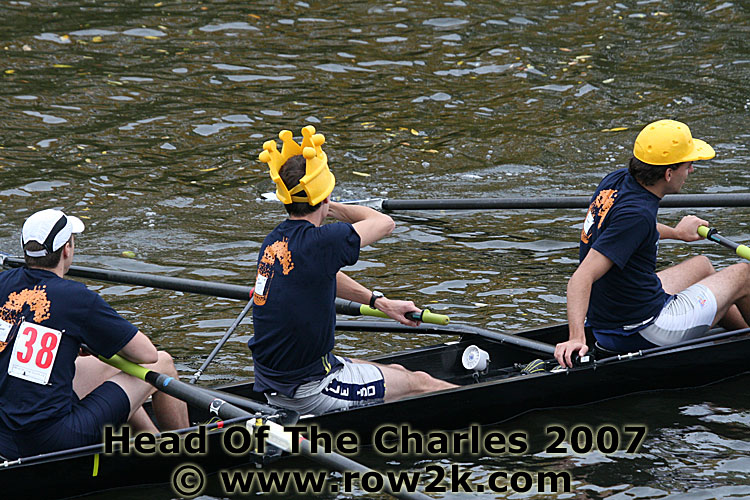 This year's Head Of The Charles Regatta promises to stoke the fires of some timeless rowing club rivalries, and kindle new flames between competing programs. Masters rowers will rise from their seasonal torpor, while crew programs within the traditional rowing club circuit will bear their teeth, flex their muscles, and smack their chests in anticipation of the competition to battle it out for bragging rights.

In the Senior-Master Men's Eight event this year are returning champion and current course record setters, Team Attager, ballasted by the Regatta's Executive Director, Fred Schoch. Schoch and his formidable cronies are setting their sights to pull a "hat trick" of victories on the heels of two back-to-back wins in 2006 and 2007. Palm Beach Rowing Association has set their sights for the past 11 months to upend the Atteger posse. Meanwhile, Kent Mitchell Rowing Club has been reconstructing their lineup (rumor has it, talented timber from the across the northern border will be part of the Kent Mitchell roster).

On the female front of the Senior-Master Eights, the 1980 Rowing Club-after prevailing amidst a harrowing race in 2007-will have to reach further than the catches of their 2007 stroke seat, Karen Klinger, to hold off the Mack Truck vengeance of the Saugatuck Rowing Club. In all fairness, Saugatuck will have to use more than verbal guile and bombast to make up the 15-seconds they were behind the 1980 Boat in last year's HOCR. Suggestions range from "setting the boat" to "just pulling harder."

Vesper and Thompson Boat Clubs' women come back to basics in the Women's Club Eight, Women's Club Four, and Women's Lightweight Eight entries. Their one-two finish at Canadian Henley is laudable. Yet it's unfortunate as well, as all of their victors and would-be champions have either lost their club eligibility (gosh darn Henley Gold!) or returned to their collegiate programs. These two clubs will now have to face the challenge of running a competitive club program with actual club rowers in their efforts to keep respective entries. Club rowers from Community Rowing, West Side, and Lincoln Park wish them well.

Similarly, Riverside's Lightweight Men's Eight are posturing up against NYAC, to hold onto their Canadian Henley championship from this summer. It will be interesting to see if RBC will hold their own on their home turf. Speaking of home turf: watch for dagger eyes and a fast race as Riverside's Men's Club Four attempts to triumph over Union Boat Club. At stake are bragging rights, river traffic patterns, and pride.

Things should get interesting as our cousins to the north-the best and bravest of the aquatic Canucks-travel south to the river Charles. In particular, Ottawa Rowing Club and the St. Catharines armada will be worth watching. (Spectators: be on the alert for maple leaf-bedecked uniforms, hockey references, and the echoing sounds of "eh?" floating across the water).

While Canadian lung capacity (and dollar value) may seem stronger than those here in the U.S., the race between the youth programs at St. Catharines and Community Rowing Inc. promises to be a heated contest in the Women's Youth Eight event. CRI emerged victorious from this year's Canadian Henley Regatta. Will St. Catharine's be able to complete an upset at HOCR? Stay tuned, eh.

The Men's Champ Single race is almost as flooded with entries from NYAC and PENN AC as the New York labor market is with overqualified MBAs. Meanwhile, the Women's Champ Single looks like a civilized colloquium between Riverside and Potomac.

Whether you root for the club underdogs or the club elite, ancient rivalries and the essence of sportsmanship will be in abundance at the 44th annual regatta. Endless opportunities exist for club redemption at the Head Of The Charles. The best of the best-and the rest of the best-will be en masse to vie for medals, bragging rights, or both. Bon chance!

For a list of all 2008 "smackdown" competitors and events, including the six Club races on Saturday the 18th, go to Head Of The Charles Schedule and Draw.