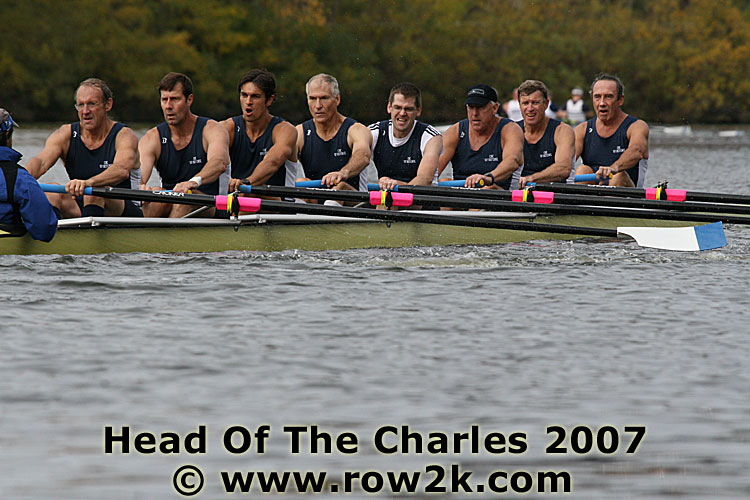 Being a competitor in the world's largest regatta is an outstanding moment for most rowers. While winning takes almost super-human strength and stamina, setting a course record over the grueling 3-mile stretch is a feat that takes on a life of its own. Course records thrill awestruck rowing fans and get accolades in the news.

At this year's 44th Head Of The Charles Regatta, an unprecedented 20 reigning course record holders will return to defend their titles. Energized competitors will take aim to beat those times at this year's Regatta, throughout the weekend of October 18th and 19th.

The HOCR course record holders to watch out for this year (or try to best, keep up with, or let safely pass by) are:

The weather and speed held for all events on Regatta weekend, aiding Division III powerhouse Trinity to their record-setting Collegiate Men's Eight time of 14:58. Head coach Larry Gluckman recalls, "the day was perfect for racing. The kids didn't have to wear or carry extra gear, it wasn't cold or wet-that helped a lot. Winning the race was about our preparation, but the course record... well, the weather played a big part in that."

Beyond the excellent weather, experience seemed to benefit many of the record-settings efforts. Five past-and-present Cambridge Boat Club record-holders (Team Attager, Geer, Benning, Zarzeczny/Remmler, Stevens) are defending their titles on local waters. Intimate knowledge of the course's seven bridges, unforgiving river bends, and tight passing lanes is required. But that's not everything. Benning claims, "there isn't really a home field advantage-it's really that we tend to fixate on HOCR all year. Guys here are working out hard in January, geared at doing well in October."

It's not just the locals who focus on October racing on the Charles. Returning record-holder 1980 Rowing Club-composed of Olympians who weren't able to compete in the boycotted Moscow games-are spread throughout the US. Seattle resident 2-seat Jean Strauss says, "we're all rowing or erging almost every day... racing here and there, but we really look forward to the Head Of The Charles. As a group, it's the one time we row together each year."

Susan Kinne and Joan Linse are also part of the Seattle rowing scene, but place the most importance on racing the famed Charles River course. Competing together in a half-dozen doubles events, including long-distance open-water challenges, they build up to the Regatta as their yearly "focus race." Emails fly back and forth about training regimen, race strategy, and erg times. Their dedication has paid off: wins in every HOCR Senior-Master Women's Doubles since the race event's inception in 2003-and resetting their course records in 2003, 2005, and 2007.

While odds are we won't see a repeat of last year's record-fest, it seems this hasn't stopped the returning champions from preparing for it. USRowing is in top form, coming off their medal-winning performances in Beijing. Trinity looks strong after shredding the competition last season to become the highest ranked Division III men's team in the nation. Kinne and Linse haven't lost in their event class all year, and are training extremely hard to make sure they're as fit as they can be. Geer had a very strong showing at Putney's Green Mountain Head, with a comfortable win in the stakes race.

However, the competition is heating up even as temperatures drop-a fact that is not lost on Benning, who will be competing against a handful rowers who have won singles at HOCR before. Benning notes, "all the course records going down last year put an adrenalin rush into those guys. They all want a piece of that. If the conditions are permitting, the competition is running 10-to-15 seconds faster than last year. It's a deep, fast field."

As always, predicting who will win any of the 57 HOCR events is a challenge. Perhaps 1980 Rowing Club's Strauss sums it up best by saying, "it's never a shoe-in... anything can happen at the Head Of The Charles."

For a list of all competitors go the HOCR Schedule and Draw.