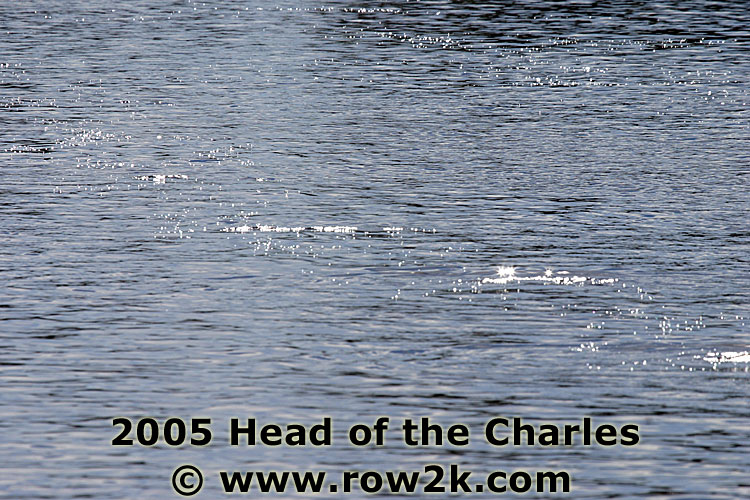 The 2007 Head Of The Charles is the biggest ever, since the annual Regatta first began modestly by members of Cambridge Boat Club in 1965 with nearly 100 scullers competing. This upcoming weekend, approximately 1,750 boats with more than 8,200 rowers from 600 universities, schools, and rowing clubs representing 39 states and 17 nations will compete in 55 different race events throughout the entire weekend.

Over the past 43 years the Regatta has grown tremendously, and the cities of Cambridge and Boston can confidently boast they are co-hosts of the largest regatta in the world!

Because of the increased influx of competitors, it has become impossible to accommodate everyone that wants to get in a practice run before actually competing on the world-famous 3-mile curvaceous course. While the Charles River is open all week for practice--up until Friday, October 19th at 6:00 PM SHARP--there will be absolutely no practice Saturday evening (October 20th) to ensure the safety of all participants during Regatta weekend. Early Saturday morning, prior to racing events, only scullers (Singles, Doubles and Quads) will be allowed to practice on the course and must be off the course by 8:00 AM.

The same traffic patterns are to be observed during practices as well as during races; boats MUST stay to the RIGHT SIDE of the river (coxswain's view) at ALL times. No launches will be allowed on the river on Friday, Saturday or Sunday. All boats launching before sunrise or after sunset MUST use bow and stern lights. Any boat showing a disregard for safety-including practice times-will be given a 60-second penalty or may be disqualified from the Regatta. Please refer to HOCR's 2007 Official Handbook for more specifics and detailed maps.

HOCR Coxswain Clinics available!
The Head Of The Charles is often known to be a "coxswain's race" and accordingly, HOCR is offering three coxswain clinics and two tours of the river on Friday and Saturday, October 19 & 20. More info at hocr.org and look for tomorrow's story on row2k.com.

Celebrate at the HOCR Pasta Party on Saturday night!
The Irish are known to throw one heck of a lively party. Mannion's Bakery & Catering of Weymouth MA is sponsoring the 2007 Head Of The Charles Pasta Party, offering a choice of delicious ragu, marinara or alfredo sauce served over warm pasta on Saturday evening, October 20th, from 5 PM - 8 PM.

A lively Irish band and twelve Irish dancers will be on stage during this evening-under-the-stars venue, with festive lights keeping people glowing under the night sky (if it rains, it will be indoors at the EXPO tent).

Located at the Finish Area Launch Site (FALS), near the Rowing & Fitness EXPO, this exceptionally festive event is free to all Head Of The Charles registered competitors and volunteers. Admission tickets are included in the official HOCR Registration Packet, and volunteers with 2007 Nautica fleece jackets can walk right in. It's also open to the general public for $10 per person, so family and friends can join the party!

Refreshing drinks and ice cream from Turkey Hill will be served. Concept2 & Hudson Boat Works will be present, as they are also co-sponsors of the Pasta Party. No parking is available, so best to walk or take the T. Free HOCR shuttle service will be available on Saturday until 8 PM, making stops at the Pasta Party and other destinations along the river.

Saturday's HOCR Award Ceremony, which includes Champion Double and Single sculler events, will be next door in the EXPO tent starting at approximately 5:30 PM-and Rowing & Fitness EXPO exhibitors will be open until 8 PM, making Herter Park in Brighton THE place to celebrate on Saturday evening!

Head Of The Charles Pasta Party