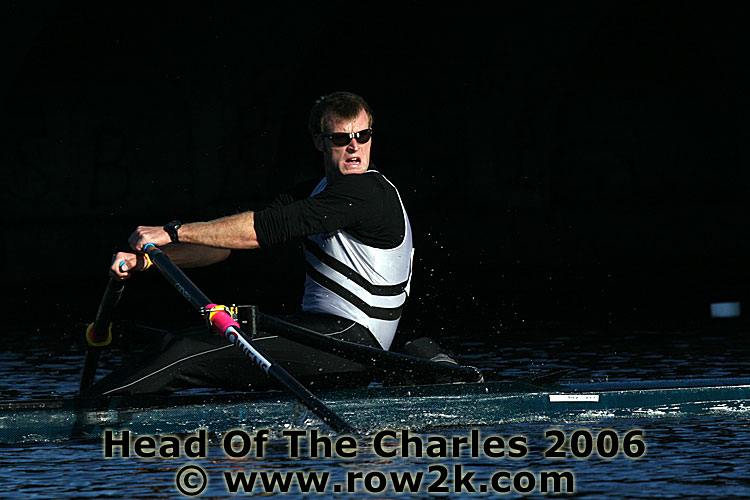 Mahe Drysdale at the 2006 HOCR

Peking University is back this year competing against another outstanding Chinese team, Tsinghua University. New Zealand's Mahe Drysdale will again be racing oar-to-oar against reigning HOCR Champ Men's Single, Santiago Fernando of Argentina. Germany is sending their men's national team to race in the Championship Eights. And the Lightweight Men's Eight at the 2007 Head Of The Charles will be a reminder of Munich, as the Dutch national team--recent gold medalists at the 2007 World Championships--will face both the Canadian and US elite (Rowing Canada and Riverside Boat Club).

Nearly 1,000 competitors at the 43rd Head Of The Charles Regatta are from countries other than the US. The Regatta is an international rowing destination, with 18 countries participating including Argentina, Australia, Canada, China, Czech Republic, Denmark, Germany, Great Britain, Ireland, Italy, Japan, Mexico, Netherlands, New Zealand, Spain, Switzerland, United States, and South Africa.

Boston and Cambridge are gearing up for the arrival of approximately 8,600 rowers and 300,000 spectators from all over world, as the Head Of The Charles Regatta is one of Greater Boston’s largest annual gatherings of international athletes.

HOCR makes a major economic mark on area restaurants and retailers, and area hotels sell out months in advance to accommodate the thousands of people who travel to Boston to be a part of the Regatta. The Head Of The Charles infuses an estimated $30 million to the area by out-of-state visitors, and the entire Commonwealth of Massachusetts benefits as the state collects an estimated $3.6 to $4 million in tax revenues attributed to Regatta sponsors, competitors, spectators and volunteers.

One of this year's HOCR Associate Sponsors, the Andalucia Sports Bureau of Spain, is tapping into the international sports enthusiasts the Regatta is known to attract. While the Head Of The Charles Regatta is an integral part of Greater Boston's cultural charm, the Andalucia region is no stranger to the world of rowing as it has hosted the FISA Team Cup and the 2002 FISA World Rowing Championships. They are hoping to attract American teams to their excellent venue and warm climes for training camps, as well as New England tourists to their fine resorts.

The Head Of The Charles Regatta is indeed an international destination for hundreds of thousands of rowers and fans alike. Explore more at www.hocr.org.